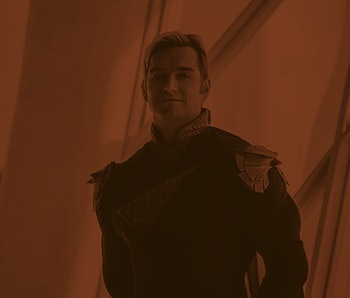 The Boys is already Amazon's biggest show ever. Season 2 was the most-watched premiere in the company's streaming history, and the R-rated superhero satire has almost doubled its Season 1 audience. So is it any surprise that Amazon is betting big on The Boys with a spin-off series? The newly announced show is set at a superhero college controlled by Vought, the show's corporate stand-in for behemoths like Disney or Amazon.

The Boys spinoff was announced in September 2020 with news that Amazon had "fast-tracked the development" of its "Untitled Boys Spinoff." In a follow-up email, Amazon confirmed to Inverse that the new show is live-action and not an animated series. But what else do we know? Here are all the details we know (and some best guesses) about The Boys spin-off cast, plot, and when we might see a trailer.

When will The Boys spin-off come out?

Amazon hasn't said when we could expect the show to premiere — we don't even know what year! — but a look back at The Boys’ long road to production could reveal some details. The Boys bounced between studios from 2008 to 2016 before Cinemax officially announced the series with writer Eric Kripke and producers Seth Rogen and Evan Goldberg. A year later, Amazon ordered an eight-episode season in November 2017, and the series premiered a little under two years after that.

Based on that timeline, we could see this The Boys spin-off come out in May 2022. Then again, Amazon is apparently fast-tracking the show. So combined with the fact that the hard work of launching the franchise and establishing its tone has already been done, it's possible the new series could come a little sooner. Maybe sometime in early 2022?

Then again, if we factor in the year that Kripke, Rogen, and Goldberg had to work on the series before Amazon even picked it up, the date looks even further away. For now, the only safe bet is that The Boys spin-off will likely be released sometime in 2022.

Is there a trailer for The Boys spin-off?

Not yet. Considering that filming hasn’t even begun, we're likely months if not a full year away from even the first images of the new show being revealed. Then again, it's possible The Boys could include a nod to its spin-off at some point in Season 3. Don't be surprised if our first look at Vought's supe college comes in an episode of The Boys.

What’s the plot of The Boys spin-off?

Set at America's only college exclusively for young adult superheroes (and run by Vought International), the Untitled Boys Spinoff is an irreverent, R-rated series that explores the lives of hormonal, competitive Supes as they put their physical, sexual, and moral boundaries to the test, competing for the best contracts in the best cities. Part college show, part Hunger Games -- with all the heart, satire and raunch of The Boys.

Additionally, in October 2020, series creator Eric Kripke said the show would focus on the “G-Men.” Created as a parody of the X-Men, the ragtag group of outcasts and runaways was briefly mentioned in Season 1 of The Boys.

Who’s in the cast of The Boys spin-off?

Who else is involved in The Boys spin-off?

Craig Rosenberg, who wrote and produced a decent chunk of The Boys, will serve as showrunner and write the pilot episode. Eric Kripke, Seth Rogen, and Evan Goldberg are all onboard as executive producers. Garth Ennis and Darick Robertson, who created the original comic, are also executive producers.

The Boys spin-off is currently in development and will stream on Amazon Prime Video.

More like this
Entertainment
Sep. 16, 2022
Blade Runner 2099: Amazon sequel brings us closer to a Blade Runner Cinematic Universe
By Eric Francisco
Entertainment
Sep. 13, 2022
Everything we know about 'Dark' follow up '1899'
By Dais Johnston and Mónica Marie Zorrilla
Science
Sep. 16, 2022
The science behind The Rings of Power's mesmerizing title credits
By Tara Yarlagadda

This article was originally published on Sep. 25, 2020