Superior Iron Man: How Tony Stark could return in 'Multiverse of Madness' 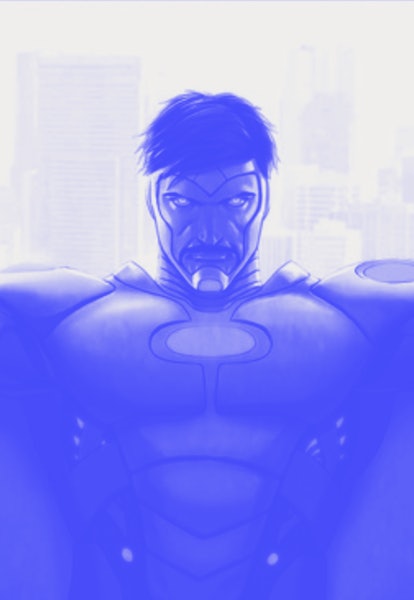 Robert Downey Jr. may be done with Marvel movies, but are we about to get someone superior?

The latest trailer for Sam Raimi’s Doctor Strange in the Multiverse of Madness launched dozens of new theories about the film, many of them centered around which familiar faces may show up in the form of variants. As Loki, What If…?, and Spider-Man: No Way Home all taught us, variants don’t have to share the same look as their base counterparts. This not only allows for some creative liberties to be taken with the characters but for new actors to take on the roles as well.

Iron Man in the MCU?

One moment in the Multiverse of Madness trailer that caught eagle-eyed fans' attention, in particular, was the Scarlet Witch (Elizabeth Olsen) facing off against a new hero (?), whose costume, seems reminiscent of Tom Taylor and Yildiray Cinar’s Superior Iron Man.

Before we get to that, I must admit that Twitter users far more tech-savvy than I have managed to isolate a clearer image of Wanda’s masked adversary and it looks like it’s Maria Rambeau as a variant version of Captain Marvel. Others have speculated it’s a version of Kang (Jonathan Majors) in his Iron Lad get-up from his time on the Young Avengers.

In either case, the character is definitely Black. Could it be a Black version of Tony Stark? Perhaps, but the insignia in the center of the costume which some have theorized is an Arc Reactor looks more like a blue version of Captain Marvel’s insignia to me. Still, that doesn’t mean we won’t see Tony Stark return in some form.

I wouldn’t hold out hope for Robert Downey Jr. returning as a variant or A.I. version of Tony Stark, as the actor has made clear that he felt his decade-long portrayal of the character was a satisfying arc and he is looking forward to new challenges. But given the seeming presence of The Illuminati in the film — given further credibility by Charles Xavier’s (Patrick Stewart) iconic voice — and the Ultron bots escorting Benedict Cumberbatch, it doesn’t seem implausible to expect some new version of Tony Stark.

Played by whom? Well, none other than a true maverick.

Rumors have long been circulating that Tom Cruise will have a role in Multiverse of Madness, in which he’ll play Anthony Stark, aka, the Superior Iron Man. The casting would be fitting considering Cruise (along with Nicholas Cage) lobbied for the part of Iron Man in the late ‘90s back when 20th Century Fox owned the property rights.

Cruise was also the basis for Iron Man’s look under comic artist Adi Granov, which in turn inspired the Marvel Cinematic Universe version. But I don’t expect Cruise, if he does indeed appear in the film, to be the same heroic Stark fans came to love.

The nine-issue Superior Iron Man series from 2015 centered on Anthony Stark, a version of Tony Stark whose personality was altered by the telepathically powered Red Skull in the comic book event AXIS. While Stark wasn’t the only hero whose moral alignment was shifted during the event, he was the only one who managed to escape the Scarlet Witch’s restorative spell. While pretending to be the same heroic Stark as before, this altered version set sinister designs in motion.

Sure, evil alternate versions of characters is a pastiche within the genre — and always seems to be following in the footsteps of Star Trek’s Mirror Universe and Spock’s (Leonard Nimoy) goatee — there’s something compelling in seeing who the characters become when their moral alignment is shifted. Especially for a character as morally conflicted as Iron Man.

Plus, Stark already has the goatee.

This “superior” version of Stark wore silver Endo-Sym armor, fashioned using the building blocks of symbiote biology — never a good sign. He also created an app called Extremis 3.0 that could enhance users by making them smarter and improving their looks. As a result, citizens began thinking of Stark as more than a hero, but a God. Unbeknownst to the public, the app allowed Stark to exert his will over users and even use them as human shields.

Rather than fighting Stark’s worst impulses, Superior Iron Man gave into them all: his arrogance and ego, his alcoholism, and his ability to create weapons of mass destruction.

It would be interesting to see a version of Stark who has convinced the Illuminati of his altruism but secretly desires to become a god within the multiverse. He might even create some sort of special armor designed to telepathically protect his thoughts from Professor X. And of course, audiences unaware of the comic book history of the character would also be in for a surprise considering how rarely Tom Cruise plays villains.

One possible issue is that Superior Iron Man might overlap too much with whatever Marvel Studios has planned for Doctor Doom. However, while Doom has successfully gained godhood (several times), Superior Iron Man’s evil machinations didn’t work out so well in the comics. After his plans were revealed to the general public, Stark went into isolation and was eventually snuffed out in Secret Wars, a result of the worlds of the multiverse colliding in an event dubbed by Reed Richards as the Incursions.

I’m doubtful Cruise will be in the MCU for the long haul (if at all) given how many projects he constantly has in development. Not to mention that other characters like Rhodey (Don Cheadle) and the soon-to-be-introduced Riri Williams/Ironheart (Dominque Thorne) are already in place to continue Stark’s legacy.

The MCU doesn’t need to stay hung up on Stark, especially with so many new characters leading into the future. But the chance to see Doctor Strange battle, however briefly, a version of the man who solved time travel, saved the universe with his aid, and first created divergent timelines, seems too good an opportunity to pass up entirely. We’ll just have to wait and see what Doctor Strange in the Multiverse of Madness has in store for us.