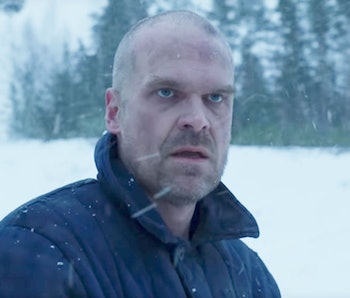 While production for Stranger Things Season 4 is on hiatus, rumors regarding the plot have continued to circulate. The end of Season 3 saw beloved character Jim Hopper sacrifice himself to save Hawkins, but a shocking after credits scene hinted he may have survived, which was later confirmed in a trailer. Now that we know we'll see more of Hopper, a new leak from David Harbour himself may contain the key to the character's upcoming storyline.

In conversation at Liverpool Comic Con, Harbour mentioned a throwaway shot from all the way back in Season 2, episode 4. In it, Eleven explores the basement of the cabin she shares with Hopper, finding boxes that are labeled with something intriguing from his past: "Dad," "New York," and "Vietnam." Those seem to have been forgotten, but Harbour referenced the boxes at the panel, adding that "In Season 4 we will give you a big, huge reveal about Hopper's backstory."

Harbour told fans that he's confident the Duffer brothers are good enough writers to make these little forgotten setups pay off, and that this won't just be backstory for backstory's sake. He added that "it relates, of course, to what he's doing with Eleven and Joyce."

Harbour says Hopper's backstory is his "favorite thing that you don't know about him yet." Considering we last saw Hopper in captivity in Russia, and Stranger Things Season 4 was reportedly filming in Lithuania before the production shutdown, perhaps these aspects of his life will be told in flashback. That could mean the nostalgic 80s vibe of Stranger Things will be replaced by that of the swingin' 60s. "Vietnam" suggests that he could have been in the military, or may have protested the war. The character was born in 1942, which means he was old enough to be involved in the fighting. "Dad" and "New York" could mean anything, and might directly tie in with the supernatural elements of the show.

Learning more about Hopper's past could add a lot of nuance to this already beloved character, and Harbour's excitement hints that this will be quite the epic reveal. It seems Season 4 will shed light on this character who, aside from the events of the first three seasons of Stranger Things, doesn't seem to have much of a past. From the viewers' perspective, his life seemed to begin when Eleven entered the picture. That's about to change.

While this doesn't solve the looming question of how exactly he survived the end of Season 3, it will provide some choice screen time for Hopper while the gang presumably work to rescue him, and show how Hopper came to be the awkwardly dancing sheriff we know and love.

Seasons 1-3 of Stranger Things are streaming now on Netflix.