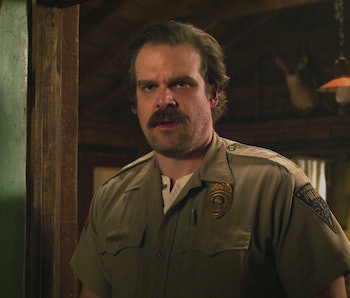 Stranger Things Season 3 is a distant memory by now, and we still have no idea when the Netflix sci-fi thriller will return. However, a new leak could reveal when we can expect the Stranger Things Season 4 release date to arrive, and one crucial detail about the plot that could answer a major question from Season 3’s cliffhanger ending.

According to Charles Murphy — an anonymous leaker who’s accurately reported on the secret inner workings of the Marvel Cinematic Universe before — production on Stranger Things Season 4 is set to begin this month and wrap in August. He adds that while the show will still primarily film in Atlanta, production will actually begin in Lithuania.

The implication seems clear: Lithuania will serve as a stand-in for the Russian prison in Kamchatka where the final post-credits scene of Stranger Things Season 3 took place. That scene also heavily hinted that Sheriff Jim Hopper somehow survived the explosion in Hawkins, Indiana but was seemingly transported to Russia. We don’t actually see Hopper in Russia, but Soviet soldiers refer to an “American” who’s clearly the small-town sheriff — or is he?

The alleged fact that Stranger Things Season 4 is filming in Lithuania also suggests Hopper’s adventures in Russia won’t be resolved immediately. He’s not going to hop back to America via whatever portal he used to get there in the first place. Instead, we could see Hopper on the run in Soviet Russia. Or, at the very least, it seems the show will explore what the Soviets are up to more broadly when it comes to the Upside Down.

So… when is the Stranger Things Season 4 release date?

Stranger Things Season 4 doesn’t have a set release date, but we can make an educated guess based on this latest leak. We know Season 3 wrapped filming in November 2018 and debuted on Netflix a whopping nine months later on July 4, 2019.

Based on that timetable, it could be a very long time until Stranger Things returns. If production actually wraps in August and it takes nine months to edit Season 4 and add in visual effects, we could be looking at an April 2021 release date.

That’s a long time to wait, but at least we know that when Stranger Things Season 4 finally arrives, we’ll get to find out what happened to Jim Hopper at the end of Season 3.

More like this
Entertainment
Feb. 2, 2023
Everything Wrong with Netflix’s New Password-Sharing Rules
By Dais Johnston
Culture
12 hours ago
Peter Jackson’s Lord of the Rings Trilogy Never Should’ve Worked — Miraculously, It Did
By Hoai-Tran Bui
Science
Feb. 4, 2023
The Weirdest Sci-Fi Apocalypse on Netflix Reveals a Controversial Field of Medicine
By Tara Yarlagadda
LEARN SOMETHING NEW EVERY DAY.
Related Tags
Share: