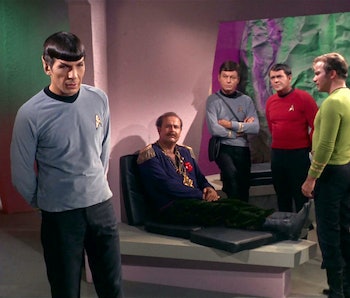 The busiest of the Star Trek baddies twirls his mustache.

We’re not talking about wrathful Khan or the mischievous Q. Appearing twice in The Original Series, once in The Animated Series, and twice in Discovery, as well as having a Short Treks episode dedicated entirely to multiple versions of him, the Trek villain to beat is not-so-secretly that swindling con-man, Harry Mudd. Played by the late Roger C. Carmel in the ‘60s and ‘70s, the intergalactic criminal is more recently portrayed by the iconic Rainn Wilson.

Speaking at the 55 Year Mission Star Trek convention in Las Vegas earlier this month (as reported by TrekMovie), Wilson told his audience, “I’ve written the producers and said, ‘Bring Harry Mudd back.’”

So far, the response from co-showrunner Akiva Goldsman has been, as per Wilson, “I don’t know, I would need to think about that.” Wilson also insinuated that if the fans “write in to producers saying they want more Harry Mudd, they will listen to that,” as per reporting out of the event.

Considering Strange New Worlds itself was partially born out of fan demand, Wilson is probably right. If enough Trek fans made noise, his take on Harry Mudd might show up on Strange New Worlds. But how would this work? Can Harry Mudd exist in the pre-TOS but post-DISCO Season 2 era? Short answer: Yes. But there’s a catch.

In Star Trek: The Original Seris, Harry Mudd appears in the episodes “Mudd’s Women” and “I, Mudd,” which occur, canonically, in 2266 and 2267. He then showed up in The Animated Series episode “Mudd’s Passion,” set in 2270. In Star Trek: Discovery Season 1, the crew encounters Mudd twice, in the episodes “Choose Your Pain,” and “Magic to Make the Sanest Man Go Mad,” both of which are set in 2257, about 10 years before Mudd appears in TOS. So far, so good.

Then, in the Short Treks episode “The Escape Artist,” Mudd is seen running around the galaxy, along with several android duplicates, presumably sometime in the late 2250s but before TOS.

So, in terms of the timeline, here’s how it shakes out:

Essentially, yes, Mudd can appear in Strange New Worlds according to the timeline. The only issue is simple: If Spock hypothetically meets Harry Mudd in Strange New Worlds, this would recontextualize Spock’s familiarity with Mudd in TOS. But that’s where the fun begins.

So, how can Harry Mudd appear on the USS Enterprise NCC-1701 without totally wrecking TOS canon? Well, the easy answer is that Spock is pretty good at keeping secrets. Michael Burnham was never mentioned in TOS, and she’s Spock’s human step-sister! If fans can accept that, they might be able to accept the fact that Spock kept an earlier meeting with Harry Mudd to himself.

But there are more fun ways to make this work, too. In Discovery, Mudd had some time crystals, which allowed him to put the DISCO crew into a time loop. So, if Mudd appears on Strange New Worlds, it’s possible he could again use some time travel shenanigans to make everyone forget he was there. In essence, Mudd could use time travel to erase Spock’s memory — because he did the exact same thing to most of the Discovery crew already.

Barring time travel, though, Mudd could also return as one of his android duplicates. At the end of “The Escape Artist,” we saw a Starfleet ship burdened with a gaggle of Harry Mudd robot duplicates, each one believing he was the real Harry Mudd. In fact, the end of the episode (written by Lower Decks creator Mike McMahan) really made you wonder which Mudd we’d encountered thus far. The “real” one? Or an android duplicate? In 2019, Rainn Wilson told Syfy:

“I think we’ve been seeing the real Harry Mudd throughout. We certainly see him at the end of this episode. [“The Escape Artist.”] But I think it would be fun to have future episodes where you don’t know if you’re seeing Mudd or a duplicate Mudd running around the universe. That would be really interesting.”

So, back in 2019, Rainn Wilson already came up with the perfect way for Mudd to return. If he does come back around to hassle Captain Pike and Spock, he might be a duplicate. And, if Harry Mudd androids are “running around the universe,” then Wilson’s hypothetical return wouldn’t need to be limited just to the SNW era. If Mudd has robot clones, whose to say some of them didn’t survive into the 24th century? Or the 32nd!

Sure, Mudd on Strange New Worlds would probably fit with the vibe of that show. But the place you’d least expect him would be in Picard Season 3 or Discovery Season 5! Nobody expects Mudd!

Who knows: maybe a Harry Mudd robot duplicate could end up working for Michelle Yeoh in Section 31. When it comes to android duplicates and the Star Trek canon, the sky really is the limit.