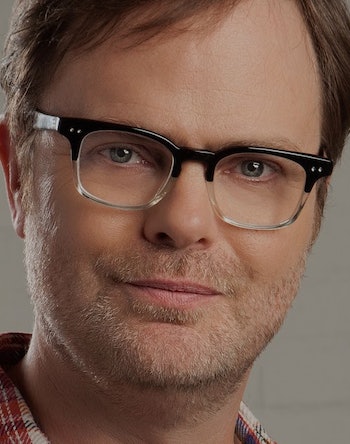 When Captain Gabriel Lorca was captured by Klingons in Star Trek: Discovery, the newest version of the saga that debuted this Fall, his cellmate turned out to be Harcourt “Harry” Fenton Mudd, a conman who Trekkies will remember tormenting Captain James T. Kirk on more than one occasion. Back in 1966, Mudd had an ostentatious mustache and was played by Roger C. Carmel, but now, he’s a bit younger, rocking a full beard and played by Rainn Wilson.

“I was excited to tackle the dark edges of Mudd,” Wilson tells Inverse of the role. “He’s kind of goofy, and he’s kind of dastardly.”

Wilson’s take on Mudd is a microcosm for the entirety of Star Trek: Discovery’s relationship with its source material: You want to believe he’s the same character from the original series, but you’re simultaneously jarred by how brooding and real this new spin on an old character seems.

Despite Wilson’s iconic turn as Dwight in The Office, he doesn’t think of himself as a comedic actor.

“I approach every role the same: ‘Who is the person? What do they want? What is the world they are in? What can I bring to that character?’ I always like to start the conversation that way,” he says. “I think comedies always come naturally to me, but I don’t really have a comedy background. I look a little bit dorky — so I had more of an in for comedy early in my career. But did a lot of heavy serious drama stuff among the comedy. I played Hamlet in college. I did Eugene O’Neill’s Long Day’s Journey into Night at the area stage.”

“I approach every role the same: ‘Who is the person? What do they want? What is the world they are in? What can I bring to that character?’”

There’s a proud tradition of actors with a Shakespearean background tackling *Trek dialogue, and Wilson as Harry Mudd is no different. Though Mudd’s a foil to Starfleet’s humans in the fifth episode of Discovery (“Choose Your Pain”), he’s also something of a Shakespearean fool; someone playing dumb to get what they want. In this way, Wilson thinks Mudd isn’t a true villain.

When asked if Mudd could ever rival Khan in a duel of Trek baddies, Wilson clarifies the difference between Mudd and Khan in the original series. Wilson knows his Trek:

“Khan wants universal domination because of his arrogance of being the most superior species, and reviles species less-advanced than him. Harry Mudd is just trying to make a dime. He’s just trying to get by. He’s spying on people in the prison. And yeah, that’s his deal. He’s a merchant and he’s trying to make some money and if he needs to get revenge along the way, to get what’s best for him, then he’ll do it. But he’s not out to destroy.”

Wilson also wants to make it clear that despite some of the dark, war themes inherent in Star Trek: Discovery, the show itself isn’t out to destroy the universe with mindless action.

“Star Trek is not an action movie until J.J. Abrams got ahold of them,” Wilson says. “I think Star Trek was about using the science fiction lens of space exploration to shine a light on contemporary human issues.”

This isn’t to say Wilson isn’t a fan of the J.J. Abrams Trek. He is. “I think J.J. Abrams had to make them more of action movies. Because that’s what contemporary society demands. He wouldn’t have gotten $150 million to do a movie about people landing on planets and exploring strange civilizations in a contemplative way. In order for the franchise to survive, he needed to do what he did and he did a great job.”

Back when Wilson moderated the Star Trek: Discovery panel at San Diego Comic-Con he joked about the superiority of Star Trek over Star Wars, a fact which he doubles-down on when asked which he truly prefers. “I will always like Star TREK better than Star WARS,” he says with an unexpected degree of earnestness.

“Though I like both. I think there is place in the world where both can be appreciated. But Star Trek has always been smarter than Star Wars. And if you look at the themes it has tackled in its episode and movies over the years, Star Trek is more interesting. George Lucas even admitted that he just made an action, space opera with a little bit of mysticism”

Wilson jokingly suggests that Harry Mudd could not only pop-up in an Abrams Trek film (Abrams directed the first two reboots and produced the third), but in a galaxy far, far away, too. “In fact, I think [Abrams] should bring Harry Mudd into the Star Wars universe and blow everyone’s mind. Mudd’s there, set up in Mos Eisley as a trader.” (Abrams directed and co-wrote Star Wars: The Force Awakens and will co-write and direct Episode IX)

“I will always like Star TREK better than Star WARS.”

For certain self-identifying geeks, Wilson’s portrayal of Dwight in The Office presents something of the nerdy dark side: a fan who’s default setting is to probably hate radically new things happening to his beloved stories.

So, what would Dwight think of Star Trek: Discovery? Would he embrace it, or be a fanboy hater?

“I think he would love it.”

Rainn Wilson returns as Harry Mudd in the seventh episode of Star Trek: Discovery, airing on Sunday at 8:30 p.m. eastern on CBS All-Access.