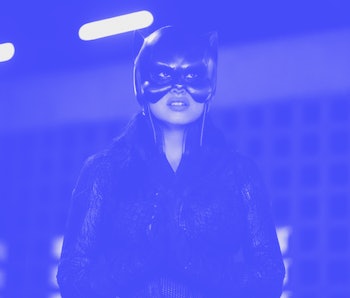 The new DC Comics series Stargirl looks and feels like a vintage superhero show. But in the fourth episode, "Wildcat," the series plants its feet firmly in the 21st century introducing a new and more relatable origin to Yolanda Montez, an honor roll student who dons the mask of the fallen JSA superhero, Wildcat.

Played by 27-year-old Yvette Monreal, Yolanda Montez is introduced in Stargirl as an aloof outcast who is bullied for reasons that aren't known to the audience. That all changes in Episode 4, when we learn the true story of Yolanda prior to Courtney Whitmore's arrival in Blue Valley.

In an interview, Monreal tells Inverse that Yolanda is closed off because of "trust issues."

"She trusted people who she thought would always be there for her," Monreal tells Inverse. "It was the first time she ever felt betrayal. She's normally fun and free-spirited. Just a happy, normal teen with Catholic parents. As soon as stuff hits the fan, she experiences things she never had to go through, and it's really hard."

Spoilers for Stargirl Episode 04, "Wildcat" ahead.

In the comics, Yolanda was the daughter of Maria Montez, a woman who took experimental drugs from the evil Dr. Love while she was pregnant. As a child, Yolanda began to develop powers as a result of the drugs. In the third issue of the 1985 DC Comics event series Crisis on Infinite Earths, an adult Yolanda dons the identity "Wildcat," a mantle that belonged to her injured godfather, Ted Grant.

That's now how things go down in Stargirl. In a dialogue-free prologue that opens the latest episode, which aired Tuesday on The CW, we see a montage of Yolanda's happy life before the start of the show.

A dedicated student running for council president, one night Yolanda texts private pictures to her boyfriend Henry, Blue Valley's star football player. When the pictures are leaked to the whole school, Yolanda is shamed out of her campaign and socially withdraws. She's also permanently grounded by her parents, a strict Latinx Catholic family.

The scandal is why Yolanda is resistant to Courtney's olive branches in the first few episodes of Stargirl.

"That's why she closes herself off," Monreal says. "She's so used to having people leave that she doesn't want to get close to someone. She knows it's going to happen."

But with the help of Courtney, Yolanda learns to trust again as she becomes Wildcat and joins Courtney in her quest to rebuild the Justice Society. "I appreciate that the writers are letting the audience go on this journey of becoming a superhero with us," Monreal says.

"You are on that ride with us. It's not like when we become superheroes we know what to do right away," Monreal says. "There's a journey."

Stargirl sticks to canon with Wildcat previously belonging to Ted Grant, but the costume is a perfect fit for Yolanda — literally. The costume was made for Monreal.

“That's when it hit me. That's when I knew I was playing a superhero.”

"I remember walking in and they had this big poster board of what I was supposed to look like. It had my actual face," she says. "That's when it hit me. That's when I knew I was playing a superhero. Each suit is custom made. This suit is no one else's. It really does take a village to make these shows happen. I had no idea what it took and I became a million times more appreciative. It sounds cliche but it's true: This is what I've always wanted to do in my career. I always wanted to be a superhero and it's happening."

"They're hot too, by the way," adds Monreal, laughing. "The material is heavy. They're meant to last."

Stargirl isn't Monreal's first appearance as Wildcat either. Her debut happened months ago, in a cameo for the TV special "Crisis on Infinite Earths" earlier this year. But the cast didn't know about it ahead of time.

"We did knot know it was going to happen," Monreal says. "Once we went to The CW that all came together. They decided. It was a good surprise."

"She’s a special character," series creator Geoff Johns tells Inverse about Yolanda. "One of the challenges with the show was making sure, like the JSA comic, it's nostalgic of the first days of superheroes and old fashioned traditions. But it's got a foot in the now. This show, we wanted it to feel the same way, nostalgic but forward-looking."

Johns, who created Stargirl for DC in 1999, said it was "tricky" to balance the show's past/future tensions. "These characters are dealing with things [that were] relevant then and some relevant now. Yolanda's [story is] firmly set in the now. Having a stepfather come into your life has been relevant for a long time. But social media and bullying and some private pictures circulating, that’s something kids deal with today."

"I hope that kids see Yolanda's story," adds Johns. "The show is ultimately about people with pain and how family and friends from unlikely places can help you process and move beyond it."

"I hope young people watching Yolanda see that mistakes happen and they don’t define the kind of person you are," Monreal says. "We’re all human, and sometimes you trust a little too much. It’s okay. Everything will be okay."

Stargirl airs Tuesdays at 8 p.m. Eastern on The CW. It streams Sundays on DC Universe.