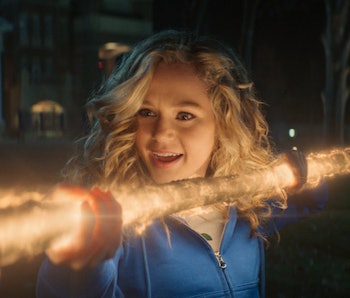 It's not hard to lose hope these days. As a pandemic puts millions of lives on pause (or worse), escapism and nostalgia for a carefree past are in high demand. There couldn't be a better time for Stargirl to come to our rescue.

Earnest, hopeful, and tons of good, old-fashioned fun, Stargirl is a winner in the expanding DC television universe. A stark contrast to gritty vigilante dramas (Arrow, Daredevil), ironic satires (The Umbrella Academy, Harley Quinn), and even the DC Extended Universe, Stargirl is an exciting refresh of the superhero genre, one that's changed so much since Action Comics #1. But as much as Stargirl feels like an old longbox come to life, the show is radically forward-thinking, too, with modern characters, conflicts, and comedy in each episode.

There's a simple elegance to Stargirl's American-made engine, and it's that simplicity that makes Stargirl a joy to watch. But the action scenes are a letdown, and that keeps the show from going supernova.

Premiering on DC Universe and The CW, and executive produced by DC titan Geoff Johns, Stargirl is the story of California teenager named Courtney Whitmore (Brec Bassinger) who moves with her family — including her stepfather, mechanic Pat Dugan (Luke Wilson) — to Nebraska. She struggles to fit in but soon discovers in Pat's things a flying cosmic staff that responds only to her. After learning that her stepdad was the sidekick to the superhero Starman (Joel McHale) of the fabled Justice Society of America, Courtney takes up the mantle "Stargirl" and seeks to form a new JSA.

With a protagonist wrapped in stars and stripes, this superhero origin story is as textbook as they come. But Stargirl has a retro style that makes it so unlike anything else.

Though set in the modern day with smartphones and Fortnite, there's a vintage Americana imbued in Stargirl that's as familiar as a Coca-Cola bottle or a Chevrolet convertible. It's nostalgic for a gleeful yesteryear but never resistant to a more inclusive present.

If fast-paced storytelling and compelling, fun characters are the main draws, the top-notch production design is a plus. Blue Valley is a town that doesn't exist in the real world anymore, and it's in the show's immersive main street, lined with diners and ice cream parlors, that Stargirl is a precious time capsule inside your TV. That its characters are also aces, especially with its magnetic lead in Bassinger and a warmly paternal Luke Wilson, makes the show effortless to sink into.

Stargirl is a show that lives and dies by its lead, and Bassinger is up to the task. Like Peter Parker or Buffy Summers before her, Bassinger's Courtney isn't apathetic or dismissive, nor hyped up on TikTok like TV executives think of today's teens. She's kind and earnest, willing to make friends with anyone and stand up to the mean girls who roam the halls. When the opportunity to become a superhero arrives, Courtney leaps at it, not for power and glory but because it's the right thing to do. Great responsibility and all that.

When Courtney inevitably recruits her unlikely high school friends to become superheroes, you best believe she's the one to anchor them all. You believe why the show must be named Stargirl and not Young JSA.

Wilson too is the unexpected iron heart of Stargirl. Far from the goofball in Bottle Rocket and Idiocracy, Wilson's role as a stepfather guarding over Courtney will be one to remember. You never know if Pat chooses to become Courtney's sidekick S.T.R.I.P.E. because he needs to protect her or to finally claim some old glory he never had with the JSA. Either answer is compelling. It also gives us Wilson in a mech suit with hot rod rims and wings. A win-win.

A few issues hold Stargirl back. The most damaging is the show's weightless action scenes. Where elder brother shows Arrow and The Flash weaponize their heroes' powers for unforgettable set pieces, Stargirl falls short of that DC TV legacy.

Another mark against her is that Stargirl's superpowers aren't terribly well-defined. It's vague whether Courtney has any powers of her own at all. The cosmic staff, the source of Courtney's entry into superherodom, is also a wasted opportunity. You get the impression it's supposed to be a full-fledged character with a personality, like the rug in Aladdin. Instead, it's the cape in Doctor Strange, a half-measure that ultimately never amounts to anything.

Much of the show's best qualities are no doubt due to executive producer Johns. The first-time TV showrunner is responsible for the best Flash and Green Lantern comics of the 2000s and also for Stargirl herself. It's that attachment to Stargirl's creation that gives the show its ethereal optimism. In 1996, Johns' sister Courtney died in the TWA Flight 800 crash and his mourning created Stargirl. How much his love and care over her integrity influenced the TV show is impossible to measure, but it definitely plays a factor in how much fun Stargirl is to watch.

Even without a pandemic, Stargirl is an easy contender for the must-see show of the summer. But in the context of Covid-19, Stargirl joins shows like Tales From the Loop and Upload as an escapist vehicle arriving just in time. It just so happens the show is also flat-out great, with infectious nostalgia and positivity for the future. It's as exhilarating as a Sunday drive with the top down and rockabilly on the radio, a reminder of normalcy that once was and can be again.

Stargirl premieres on DC Universe on May 18 and airs on The CW on May 19.