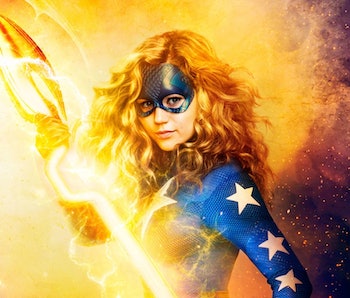 The conclusion of The CW’s massive Arrowverse crossover, “Crisis on Infinite Earths” teased a potential formation of the Justice League, with The Flash, Supergirl, Black Lightning, Batwoman, and Superman congregating in the Hall of Justice for their first formal team meeting. It was a fantastic moment, but one that played out without formally bestowing the superhero team with the iconic mantle. However, Stargirl — the latest entry into DC’s live-action TV echelon — may finally launch the Justice League show we’ve always wanted.

At the tail end of “Crisis on Infinite Earths,” Stargirl was confirmed to exist on a rebooted version of Earth-2, a whole other world that cleverly remained separate from the rest of the Arrowverse shows. The new series, the first to air concurrently on DC Universe and The CW, will follow Courtney Whitmore (Brec Bassinger) on her journey to becoming Stargirl. She’ll be helped along by stepdad Pat Dugan (Luke Wilson), a former superhero and original member of the Justice Society of America (JSA), a team of superheroes who defended Earth from numerous villains and criminal organizations. The JSA effectively paved the way for the introduction of the Justice League in the comics, which included members like Batman, Superman, and Wonder Woman, among several others.

The OG superhero team is set to play a crucial role in Stargirl and could eventually feature classic JSA characters like Alan Scott’s Green Lantern and Jay Garrick’s Flash, both of whom were Golden Age characters and founding members of the original JSA. These iterations of The Flash and Green Lantern won’t appear in Stargirl, but their legacies will be critical to the story. Executive producer and co-creator Geoff Johns even teased that there would be more stories featuring these heroes down the line. Here’s what he told IGN:

“[Green Lantern and Flash] are spoken of and they exist in the JSA. There's a picture of them in the first episode, and there's plans in the future for things, but Jay Garrick and Alan Scott, to me, are always the elderly statesmen. They're the big heroes of the JSA and their shadow is very long and they're great characters. They are a part of the original JSA and their legacies will be felt throughout the show. I don't want to spoil too much about it, but I can leave it at that.”

Consider our interest piqued. If Alan Scott’s Green Lantern ever shows up, it will mark the first live-action TV appearance for the character. A version of Jay Garrick has already appeared in multiple episodes of CW’s The Flash. Stargirl isn’t the first time the JSA has appeared in live-action, though — both Smallville and DC’s Legends of Tomorrow had that honor.

Unlike the team’s previous iterations, however, it’s possible the DC Universe show is laying the groundwork for The Flash and Green Lantern to eventually form a newer version of the team, aka the Justice League. After all, the JSA is clearly playing a more significant role in the series, which also includes the Injustice Society (!), so there’s always a chance that these characters could show up and build upon what's come before.

What’s more, Stargirl being a younger superhero could mean that she becomes a founding member of the Justice League, following in the footsteps of her stepdad and the OG JSA members. Whether or not the Justice League is ever included in Stargirl remains to be seen, but the series seems to be building a strong enough foundation for it to happen.