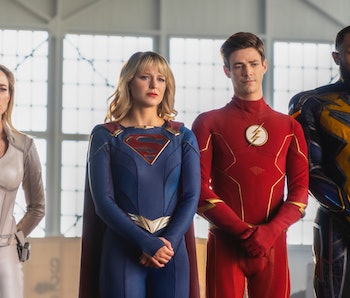 Spoilers for the ending of “Crisis on Infinite Earths” ahead.

At the end of “Crisis on Infinite Earths,” crisis was averted when the heroes of Arrow, The Flash, Supergirl, Legends of Tomorrow, Black Lightning, and Batwoman came together to stop the Anti-Monitor and officially form the Justice League.

While they’re not going by that name exactly (no team name was given), they did get themselves a Hall of Justice, reusing the emptied warehouse from the 2016 crossover special “Invasion.” Barry Allen, (aka, The Flash) even got everyone a table complete with sweet gamer chairs. Don’t tell me you wouldn’t want to marathon Red Dead Redemption II on those bad boys.

But then, a crash! A ohh-wahh-wahh heard in the distance. Could it be…?

As the heroes react with confusion over a ruckus happening above, the camera cuts to an empty cage down in storage. Half-eaten bananas strewn about, and a name that says “Gleek.” That’s right: Freaking Gleek, the pet monkey of the Wonder Twins, is coming to the Arrowverse! And with Gleek, the Wonder Twins themselves can’t be far behind.

Who is Gleek in the DC universe?

Gleek is the pet space monkey of Zan and Jayna, the alien siblings who make up the Wonder Twins. The characters debuted not in comics but in the Saturday morning Hanna-Barbera series, The All-New Super Friends Hour, a sequel to the 1973-1974 show Super Friends. A cover of the Super Friends theme song is played when the show teases Gleek having escaped his cage.

An intelligent specimen from the planet Exxor (which doesn’t have bananas!), Gleek doesn’t verbally speak but can communicate via sign language, charades, or in his native alien tongue that is never translated.

Although heavily associated with the Wonder Twins, themselves oddities in the history of superhero pop culture, Gleek doesn’t really have a long history in comics. However, he did make his triumphant return rather recently. In the 2019 Mark Russell/Stephen Byrne series Wonder Twins, the series reimagines the Wonder Twins as alien exiles who must learn to deal with the social maze that is high school. And Gleek shows up kind of out of nowhere.

What Gleek means for the Arrowverse

It’s a bold new future for the Arrowverse following the end of “Crisis on Infinite Earths.” Most of the worlds have merged together to make Earth-Prime, while the multiverse still inevitably splits to create new worlds (connecting shows like Titans, Doom Patrol, Swamp Thing, the 2011 movie Green Lantern, and the upcoming Stargirl on DC Universe).

But on Earth-Prime, Gleek’s teaser could just be a fun nod to the weirder sides of the DCU — or the actual, imminent rival of Gleek and probably even the Wonder Twins. There has been nothing in the way of casting for the Wonder Twins just yet. It’s likely that the characters won’t debut until after the latter half of the Arrowverse’s season ends and a new one starts in the fall.

With every Arrowverse series renewed for fall 2020, that’s pretty much the perfect time for the Wonder Twins to show up, activate their powers, and take the form of everyone’s new faves.

The Arrowverse returns next week with a new episode of Batwoman, airing Sunday at 8 p.m. Eastern on The CW.