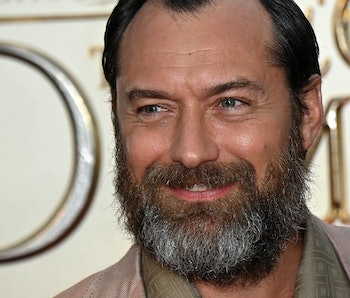 There’s nothing Star Wars and the Marvel Cinematic Universe love like sharing stars. Lupita Nyong’o is both a badass in Black Panther and a wizened collector in the sequel trilogy. Natalie Portman won Anakin’s heart as Padmé Amidala and now is set to wield Thor’s hammer. More recently, Oscar Isaac starred in the sequels as Poe Dameron and is now helming Moon Knight, an MCU series of his own.

Could there be another addition to this list? A new rumor suggests a franchise veteran could make his Star Wars debut — but he may not be the star.

Notorious Instagram gossip deuxmoi recently claimed that a “Prime British early 2000s film stud is adding to his recent nerdgasm resume (Marvel, Wizarding World). Recently cast in unannounced Star Wars extended universe Disney+ show.” It’s hard to think of anyone who fits that description except Jude Law, who was featured in Captain Marvel and is now starring as Albus Dumbledore in Fantastic Beasts: The Secrets of Dumbledore.

Deuxmoi isn’t a renowned Star Wars leaker and usually treads in celebrity gossip, but this rumor seems plausible. Star Wars does have shows in development that haven’t been officially announced, most notably a mysterious series with the working title Grammar Rodeo.

Grammar Rodeo is described in leaks as “Stranger Things in space,” which at first glance doesn’t exactly fit Jude Law’s filmography. But if there’s one thing every kid-based sci-fi series needs it’s a grumpy but caring dad figure, someone like David Harbour’s Sheriff Jim Hopper in Stranger Things.

If Grammar Rodeo really is the extended universe show referenced in the leak, we could see Law graduate from the Young Pope to the oldest character in the series. The biggest question is whether the characters in the show will be Force users, or just adventurous kids. A casting leak from The Illuminerdi never mentioned the Jedi or Sith, but maybe they’re all younglings in training.

Regardless of whether Law is playing an Obi-Wan-esque Jedi master, a mentor figure, or even a villain, his British charm and experience in children-focused franchises makes him the perfect fit for whatever Grammar Rodeo turns out to be.