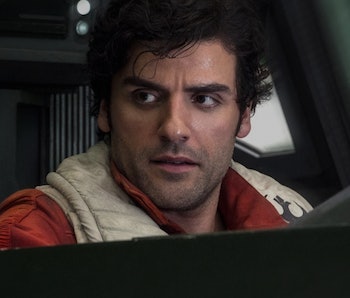 What’s better than one Han Solo? Two Han Solos, of course. At least, that seems to be the argument of Star Wars: The Rise of Skywalker, where Finn and Poe Dameron compete for the role of Harrison Ford replacement for a little over two hours.

From the first moment we see this dynamic duo, it’s clear that’s exactly what they’re doing. Both Finn and Poe sit on one side of the Millennium Falcon’s holochess table opposite Chewbacca. It’s as if Rise of Skywalker is saying: Oh, you like Han Solo? How about TWO Han Solos?

Throughout the movie, this dynamic only gets more obvious. Finn can’t seem to go more than a few minutes without hopping over some rolling barrel or downed Stormtrooper. Poe gets a new backstory as a spice runner who knows how to hot-wire a speeder bike. So who’s the most badass hotshot of Rise of Skywalker

There’s one line, in particular, delivered by Poe, that cements as role as the Han Solo of The Rise of Skywalker, and he does it by channeling another iconic Harrison Ford role: Indiana Jones.

After Rey, Finn, Poe, and the gang get caught in some “sink sand” and end up underground where they discover the dead body of an important Sith loyalist, Poe Dameron delivers one key line: “I don’t like bones.”

If that line sounds familiar, it’s because Harrison Ford said something pretty similar in Indiana Jones and the Raiders of the Lost Ark when he reveals his hatred for snakes only to encounter an entire secret cavern full of them. The words don’t line up perfectly, but the tone is almost identical.

Much like Indiana Jones, Poe goes on to save the day, but only with the help of Finn. Because in Rise of Skywalker, one Han Solo isn’t enough.

It might seem excessive, but this is the final movie in the entire Skywalker saga. If there was ever a moment to just go for it, this is that moment, and that’s exactly what Star Wars: Episode IX does.