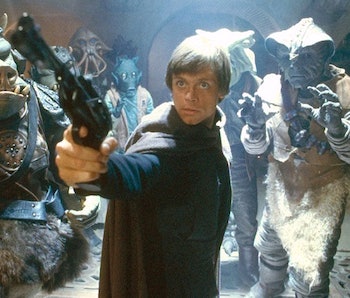 When he first read the script for The Empire Strikes Back, Mark Hamill expected a dramatically different ending for Luke Skywalker than the one we got. In a new interview, Hamill says he was initially "disappointed" with the script for Return of the Jedi, since he'd expected his character to go in a much darker direction after Empire.

Recently, Hamill participated in an in-depth discussion of The Empire Strikes Back on the Russo Bros. Pizza Film School show on YouTube. Hamill and Avengers: Endgame directors Joe and Anthony Russo were joined by MCU screenwriters Stephen McFeely and Christopher Markus. Hamill discussed his early impressions of the Empire script, and it's an utterly fascinating alternative vision of the classic Star Wars trilogy.

Hamill said he initially wasn't sure if the script for the original Star Wars was something he was supposed to take seriously. "Is this a parody? Is this sincere? Mel Brooks?” Hamill joked. Because the original Star Wars was such an "amalgamation of styles," Hamill said it was "the goofiest" script he'd ever read. His first impressions of the script for Empire Strikes Back were far different.

"Nothing could have prepared me for reading The Empire Strikes Back," Hamill said. "It was so much more challenging for the audience... demanding so much more. It was more spiritual, it was deeper."

He said this "risky" approach excited him, but also pointed out that his initial perusal of the script left him feeling "misled." In essence, Hamill expected Luke to turn to the Dark Side, in order to be rescued and redeemed:

"What I thought when I read the script and saw what Luke went through was that he was being tested in the very same way his father had been. That the Dark Side was an easier way to go. I was figuring that by the time movie ended, I have one mechanical hand that was sort of analogous to Vader... I thought the third film would be Luke turning to the Dark Side and then, at the end, having to redeem himself.

"I remember saying to George that I was a little disappointed in the script for [Return of the] Jedi... he reminded me that these movies are meant for kids. He had to remind me what the original intent was, and I agreed with him. But, you know, as an actor, you always want to play your evil twin."

The actor has previously mentioned the idea that there would be an "evil" version of Luke, but never in the context of the classic trilogy. Before The Last Jedi was filmed, Hamill apparently lobbied Rian Johnson to include a plotline straight from the Legends novels, in which Luke Skywalker was cloned for nefarious purposes. However, this interpretation of Luke's journey in the original trilogy is much different and far more serious.

Hamill's initial read of The Empire Strikes Back seems spot-on. If you can somehow isolate what you know about that movie without thinking about Return of the Jedi and everything that follows, the person in the most danger of becoming evil is Luke.

The stakes for Luke turning to the Dark Side late in Return of the Jedi are non-existent. Luke begins Return of the Jedi as a calm and stable person, far more advanced in the use of the Force. Part of why Luke's swagger at Jabba's Palace is so memorable is because it's so unexpected. He's in a far more vulnerable place at the end of The Empire Strikes Back.

If you look at it a certain way, Empire suggests a character arc for Luke Skywalker that just ends up not happening. The danger in Luke becoming more like Vader is echoed during Jedi's final showdown, but the threat of Luke actually turning to the Dark Side isn't palpable because it simply never happens.

Could Luke have turned to the Dark side?

This reading of Empire from Hamill is interesting for a few reasons. Putting aside the idea that Star Wars is for children, so you can't do Dark Luke, he's kind of right. At the end of Empire, Luke certainly angry enough to make some radical decisions.

In The Last Jedi, the audience is subtly encouraged to see why Ben Solo might turn to the Dark side after Luke considers murdering him in his sleep. Hamill's recent comments remind us that when Luke was about Ben's age, he had just as much reason to run in that direction.

Think about it. At the end of Empire Luke realizes he was lied to, and that he is, basically, on his own. The only person giving him the straight dope is Darth Vader. Comparatively, Kylo Ren's motivations for turning to the Dark Side seem somewhat flippant, or similar enough to make you wonder why Luke wasn't just a teeny, tiny bit more tempted than he was. (The answer is, basically, because the script wouldn't let him.)

After the release of The Rise of Skywalker, we learned that Colin Trevorrow's unmade Episode IX had Kylo Ren go further into the Dark Side, and his eventual "redemption" would have been almost non-existent. On some level, if you squint, Hamill is suggesting a similar arc for Luke in the original films. Again, based only on what we see in Empire, this kind of character arc makes sense. Just like it makes sense for a post-Last Jedi Kylo Ren to become more evil, not less.

The notion of the hero becoming evil — even temporarily — is a path taken only by the prequels. We're told Luke and Rey could turn to the Dark Side, but we never really believe it. Anakin was Darth Vader in our minds before the prequels even got going, so it's questionable if there's any real tension there in our minds. Revenge of the Sith is certainly more hardcore than Return of the Jedi, but that doesn't mean we fear the Dark Side as much as we could.

But for a moment in 1980, the Dark side probably was at it's strongest. The hero could actually fall, with tremendous consequences. Star Wars is great at showing us the moments when people do the right thing, but with people like Luke and Rey, it rarely makes us believe they could ever really go evil. The Dark side might be easier, but, when it comes to Luke Skywalker, it doesn't have any teeth.

Check out the full interview on the Pizza Film School, here.