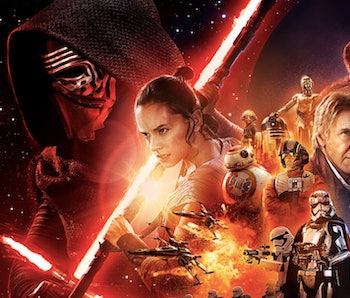 Kylo Ren almost had a much cooler name — or did he? Could Star Wars fans have lived in a world where the villain of The Force Awakens was known to his enemies (and allies) as "The Grave Robber?"

One particular piece of art caught our attention for what it reveals about the character overall. Could Kylo Ren been a different, and more interesting character had he been "The Grave Robber?" Let's take a look.

In The Force Awakens, one of the most interesting things about Kylo was his obsession with Darth Vader. By the end of The Rise of Skywalker, we learned that any connection he thought he had with the spirit of Vader was really just Palpatine playing mind games. But, before all of that was decided, it's fun to remember there was a real air of mystery about why Kylo Ren would want to get himself the melted helmet of Darth Vader. One of the coolest images from the earliest Force Awakens trailers was that melted Vader helmet. When Kylo spoke to it, Hamlet-style, it really sent shivers up your spine.

The piece of concept art that has resurfaced brings us back to that moment; a moment when there was still excitement and mystery around the new Star Wars films. A moment when anything seemed possible.

Now, Alzman's concept art for the entire Star Wars franchise is pretty gripping, and he puts most of us stuff up on his Instagram. Notably, Alzmann still does a ton of concept art for Lucasfilm — his paintings are often a part of the credits montage at the end of various episodes of The Mandalorian.

When did Kylo become Ben?

While the concept art for "the Grave Robber," is certainly slicker than the final design for Kylo Ren, it's tough to imagine an actual person in that particular helmet. Aesthetically, Alzmann's paintings are probably closer to what we wanted when we didn't actually know anything about Kylo Ren.

But the problem there is that Kylo Ren — unlike Boba Fett and Darth Vader — is a character that needed to be unmasked fairly early in order to make an impact on the story. In The Art of the Last Jedi, Alzmann commented about his concept painting in which "the Jedi Killer" murders Han Solo. From the painting, you can kind of tell that this character wasn't exactly what we came to know as Kylo Ren. In fact, the idea that back in 2013 the character was still a secret to most people involved. But as author Phil Szostak relates in that book, "In late summer of 2013, the Visualists were let in on two secrets that would not be revealed to the rest of the world for another year and a half: that the beloved Han Solo would meet his end in The Force Awakens, dispatched by the malevolent Jedi Killer — and that the Jedi Killer would be Han and Leia Organa's son."

This information wasn't even documented until the 2017 release of The Art of the Last Jedi, because the notion of Han Solo's death was intentionally kept out of The Art of the Force Awakens for fairly obvious reasons. But, the telling detail here is that Kylo Ren, back in the concept art stage was also referred to as "the Jedi Killer."

"The Jedi Killer" and "The Grave Robber" are cool images, but are they characters?

The one thing to keep in mind about all the excitement with old concept art is that talking about Kylo Ren like "the Jedi Killer" or "the Grave Robber," misses one important point. These were names used by the artists, not by the screenwriters. Unlike Boba Fett or even Darth Vader in the original trilogy, Kylo Ren is a character who is arguably defined by the moment he removes his helmet. What makes the aesthetic design of his helmet work in The Force Awakens is that it does come across as in-universe Darth Vader cosplay. There's something about the inherent uncoolness of Kylo Ren's helmet that sells the audience on the idea that Kylo is a deeply insecure person, hiding behind a strange persona.

In other words, the visages of "the Jedi Killer" and "the Grave Robber," gesture at characters that Kylo is not. Despite his controversial end in The Rise of Skywalker, there's no getting around the fact that other than Rey, Kylo Ren is easily the most interesting and multifaceted character of the entire sequel trilogy.

Had Kylo Ren's helmet and outfit been too badass, we might not have gotten to the great moment in The Last Jedi when he shattered it. The fragility of Kylo Ren is part of what made the character so unique and allowed Adam Driver to give what has got to be the most nuanced and memorable performances in all of Star Wars.

So, while the Grave Robber looks pretty sick, and the Jedi Killer looks killer, it's hard to imagine Adam Driver giving either of those guys life. Regardless of how you feel about The Rise of Skywalker, the sequel trilogy gave us the best version of Kylo Ren. He may not look super-awesome, but he's got it where it counts.

You can buy all "The Art of..." books about the Star Wars sequel movie now.