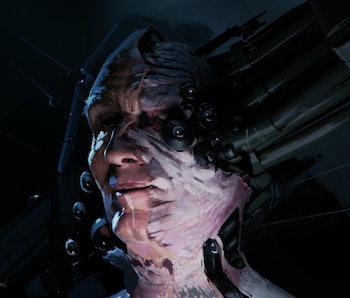 Star Wars concept art is a genre in its own right. Whether the classic Ralph McQuarrie illustrations or the end credits of The Mandalorian, these gorgeous flights of fancy never been a secret from the fanbase. As an end-of-year treat, a Rise of Skywalker concept artist shared multiple pictures from the film's earliest planning stages, including a very well-known planet from the prequel trilogy.

Production designer and concept artist Kevin Jenkins, who worked on The Rise of Skywalker and Jurassic World: Dominion, released a slew of previously unseen concept art on Twitter in late December. These images varied from initial looks at a revived Palpatine, rough sketches of the Exegol throne room, and an area described as "The Crimson Space." However, the most interesting image of all depicts a drab, unassuming planet.

According to Jenkins, the image depicts an "ash-covered Coruscant." After serving as the urban center of much of the action in the prequel trilogy, the heart of the Old Republic and Palpatine's Empire never returned to the big screen. Colin Trevorrow's abandoned Episode IX script Duel of the Fates featured Coruscant extensively, leaving those beguiled by Jenkins' art to wonder if this image was actually derived from Trevorrow's vision.

On Jenkins's Twitter it's labeled as "Rey's arrival after landing in Red 5. Pre-script Rise of Skywalker development." This suggests that Coruscant may never have been part of J.J. Abrams's plans.

Nevertheless, this first official glimpse at what a post-Empire Coruscant might look like is exciting, and could possibly mean a visit to Coruscant in the future. Star Wars projects lifting abandoned ideas from past concept art is commonplace, like how The Mandalorian's ice spiders originated as concept art for The Empire Strikes Back.

A post-prequels Coruscant has long been a setting Lucasfilm has intended on exploring. The abandoned video game Star Wars: 1313 was supposed to follow Boba Fett as he navigated the seedy underbelly of Coruscant. The original concept, as it was dreamed up in 2009, was an enticing Grand Theft Auto-inspired spin on the most densely populated planet in the galaxy.

In a 2015 interview with SlashFilm, Kathleen Kennedy stated material from that game was still open for development, potentially in another project entirely. Now, six years later, there's ample space to show what really became of the planet, whether in a reimagined riff on 1313 or an upcoming film like Rogue Squadron.

While Coruscant may not have been in J.J. Abrams's vision for the remainder of the Skywalker Saga, if there's one thing Star Wars teaches us, it's that "no one's ever really gone." Whether that's Palpatine or an entire planet, there's always a chance at a return.

Star Wars: The Rise of Skywalker is now streaming on Disney+.