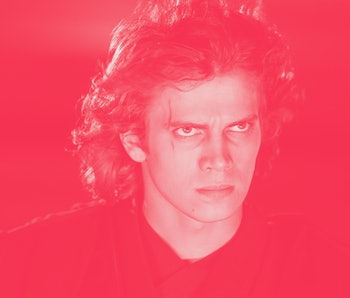 When Mark Hamill confirmed his return as a Force ghost in The Rise of Skywalker, it raised the chances that Hayden Christensen might also cameo as the spectral form of Anakin. After all, the man who became Darth Vader was redeemed from his villainy after sacrificing himself to save Luke in Return of the Jedi, and a focus of obsession for Kylo Ren. Anakin was crucial to the original Star Wars trilogy and the prequels, so it seemed all but inevitable he would show up for one final hurrah. Now, several weeks after the film hit theaters, leaked Rise of Skywalker concept art seems to confirm a major theory about Anakin’s Force ghost.

Jedi deaths are tricky. Sometimes, Force users disappear immediately following their death, instantly becoming one with the Force. This is exactly what happened to Kylo Ren following his sacrifice to save Rey’s life in Episode IX. Others are burned on a funeral pyre as dictated by Jedi tradition. Luke rescues his father’s body from the Death Star and cremates his body, still inside the Darth Vader suit, at the end of Return of the Jedi. Leaked concept art from The Rise of Skywalker reveals that Anakin's Force ghost may have manifested itself from those ashy remains.

The concept art sees Kylo Ren near what appears to be the podium that displayed Vader’s helmet. However, in the helmet’s place are Anakin’s ashes. Kylo stands at the center, watching as the gray particles converge around him. While the concept art is not a confirmation that the ashes would have actually manifested into Anakin’s Force ghost, the official images reveal the first official hint at plans for for Anakin to appear in Episode IX, which were ultimately scrapped before filming began.

The image was shared on Twitter and comes from the upcoming book The Art of Star Wars: The Rise of Skywalker. In a second image, Vader’s ashes are on the floor and it seems they’ve dissipated, indicating that the conversation with Kylo was over. Whatever message Anakin had for his grandson, it's possible this conversation may have pushed Kylo even further toward redemption.

Previously revealed concept art revealed Rey’s storyline being much different from that of the final cut of The Rise of Skywalker, so it’s not a stretch to believe the idea that Anakin had a role in the early concepts for the movie. We may never know whether or not Anakin would have appeared as a Force ghost, but the concept art indicates that Vader wasn't completely forgotten.