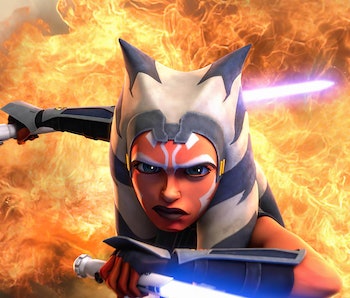 Begun, your streaming binge has. How are we already a third of the way through Star Wars: The Clone Wars Season 7?

With the final season of now upon us, there is only one place to stream every single episode of the animated Star Wars prequel series: Disney+. If you're wondering exactly when episode 4, "Unfinished business" will drop, and how you can catch up on previous seasons, we've got you covered.

Disney+ uploads new episodes of all its original programming just after 3 a.m. Eastern on Friday mornings. That means West Coast night owls are in luck, and will be able to catch the latest episodes at midnight local time.

To binge-watch all of Star Wars: The Clone Wars including the new season, it's available only on Disney's streaming service, Disney+. You'll need a subscription to the service (if you don't have one already), which will also give you access to all the other Star Wars movies and shows like The Mandalorian, as well as countless other Disney programming.

Where can I watch Seasons 1-6 of Clone Wars?

Disney+ isn't the only place to watch The Clone Wars if you're just getting in on the fun. The first six seasons of the show, and the 2008 film, are also available for purchase on YouTube, VUDU, and Amazon Prime. However, only the seventh/final season will stream on Disney+.

Just catching up on Clone Wars? Here's what you need to know

The Clone Wars first debuted on Cartoon Network in 2008, and focused on the previously unexplored events between Star Wars Episode II: Attack of the Clones and Episode III: Revenge of the Sith are finally revealed.

Reminiscent of vintage Saturday morning pulp serials, every episode dives into conflicts both big and small amidst the ongoing "Clone Wars." While some episodes feature Anakin, Obi-Wan, Yoda, and Mace Windu on Jedi business, others follow minor or new characters. Some of the best episodes star specific Clone Troopers, who become more than just faceless grunts on the frontlines of the war.

The show originated on Cartoon Network, where it ran for five seasons before "winding down" in 2013. The show continued for one more season on Netflix in 2014, and now a new (and final) season is coming out piecemeal.

And there you have it. As Season 7 of The Clone Wars continues to roll out, you'll need to sign up for Disney+. However, you can buy and keep the other six seasons on other prominent platforms. Happy binge-ing! Frankly, you picked a really good time to stay inside.

Star Wars: The Clone Wars is now streaming on Disney+.