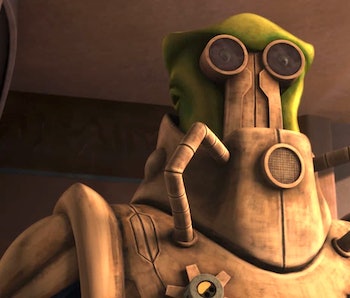 The Clone Wars are confusing. Not only are both sides of this star war controlled by the same guy, the Separatists have their own splintered factions. But Season 7's third episode handily explains every conflict spanning the Star Wars saga. Turns out that war profiteering Rose and Finn stumbled upon in The Last Jedi has been going on for a long, long time. Spoilers ahead.

The Clone Wars wouldn't be so wonderfully weird without the inclusion of an extra-hilarious prequel character like Wat Tambor. First seen in Attack of the Clones, he's the faux-steampunk foreman of something called "The Techno Union Army," which claims to be a neutral party in the war. However, we know they're working with Count Dooku and the Separatists, mostly because Tambor's big line of dialogue in Attack of the Clones was, "The Techno Union Army – various floopy-bloop robot noises – is at your disposal, Count."

The only other thing Tambor says in a live-action Star Wars movie is also directed to Dooku: "With these new battle droids we've built for you, you'll have the finest army in the galaxy."

In the new Clone Wars episode, Tambor rages about the profits he stands to lose after the Clone Trooper Echo escapes. Turns out the Techno Union Army doesn't care about Dooku and the Separatists: this is all about money. What Tambor's really worried about is his profit margin.

If Tambor and the Techno Union Army don't supply the Separatists with the intel they promised, they'll lose out on more contracts. Infamously, the battle droids Tambor mentioned in Attack of the Clones are the same variety that killed Din Djarin's (AKA The Mandalorian) parents. In fact, the Separatists are super-reliant on what Wat Tambor supplied. The Roger Roger battle droids of the Trade Federation were clearly not cutting it in The Phantom Menace, but Tambor's modified flying versions in the latest Clone Wars episode kick serious ass.

So who cares? Battle droids aren't used anymore by the time of the original and sequel trilogies. The Techno Union Army essentially sold all the weaponry for one half of the war. This practice remains the status quo for armed conflicts up until The Last Jedi. In Canto Bight, Rose points out that the people there are fabulously wealthy from selling weapons of war. They sell both X-Wings and TIE Fighters. To anyone.

Essentially, having one kind of starfighter — or battle droid — does not automatically make someone good or bad. All of these Star Wars weapons — from automated troops to ships of war — come from parties interested in making a buck.

The Clone Wars are the result of Palpatine manipulating the Republic and the Separatists into believing that they needed a Clone Army and a Droid Army. But without Wat Tambor's motivation for cash, those Super Battle Droids may have never been built. During the era of the original trilogy, it seemed Empire controlled all modes of production, but that's not exactly true. In old-school canon, the Empire's ships were built by Kuat Shipyards, while the Rebellion ships came from a few different ship-builders. X-Wings were designed by Incom Corporation, which chose to sell weapons to the Rebellion early on. On some level, Incom (and others) decided that the Empire was bad for business, and helping the Rebellion would generate profits.

We're barely scratching the surface of how deep this goes in the history of Star Wars. Like the news media and record-keeping in Star Wars, the economics of a galaxy far, far away are pretty sketchy. Also, we generally only see Star Wars stories set in a time of massive conflict.

Could the economy of Star Wars function during peacetime? Yes, but perhaps not very well. The three trilogies take place over the course of 60 years of galaxy-wide wars, so it's really only during the in-between periods — between the prequels and A New Hope, or now, during the time of The Mandalorian, that we could get a glimpse of normalcy. As Clone Wars has just demonstrated, there's more profit to be made when things are terrible.