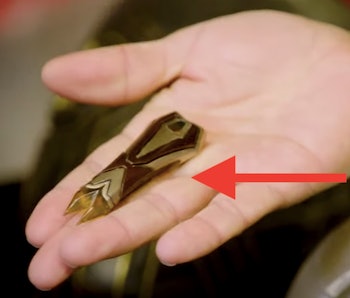 The Cardassians have finally joined the Federation. A brief Easter egg in Star Trek: Discovery Season 3 reveals an off-screen development many fans missed. A species of alien largely depicted as sadistic and fascist, has become part of the most peaceful intergalactic organization of all time. If you remember the Cardassians as the species that invaded Bajor, tortured Captain Picard, and built shoddy space stations, Trek canon wants to change your mind.

A piece of tech acquired by Michael Burnham in Discovery Season 3 confirms the Cardassians are no longer enemies of the Federation in the 32nd century, which could set up their Season 4 return. Here's what it all means, and how it might play out in the future.

The Easter egg everyone missed — In an official behind-the-scenes video for Discovery Season 3, prop master Mario Moreria specifically revealed all three of the starship "black boxes," recovered by Michael Burnham throughout the season. In her effort to discover the cause of the Burn, Burnham was determined to get the info from various Federation ships before their warp cores mysteriously exploded. What Moreria points out, is that one of the black boxes, from the starship Gav'Nor, was in fact, a Cardassian ship. Which, as he says in the video, was "a Federation member ship at that point."

Although Lower Decks takes place just five years after the Dominion War, in 2380, there are already signs that the Cardassian Union is on decent terms with the Federation. In "Temporal Edict," the USS Cerritos is on-route to Cardassia Prime to broker a peace treaty between different alien races. Because it's Lower Decks, this detail is mostly played for laughs, because we're later told the "Cardassians are freaking everyone out." But, it's still canon and does demonstrate something Deep Space Nine did over and over again – point out that huge aspects of Cardassian culture were not cool with the fascist regime that defined much of Cardassian history as we know it.

In several pivotal episodes of DS9 (notably "Duet") we were introduced to the notion that the occupation of Bajor was not something a huge portion of the Cardassian people supported. The series made this pretty clear as an analogy about Germans who resisted Nazi Germany from within. With that in mind, it seems unlikely that the Federation would have forgotten about the Cardassian government's actions all that quickly. But, roughly 800 years is a pretty long time. Who knows what the Cardassians are like now!

We could see DS9 again — With a series of striking Easter eggs, Discovery Season 4 revised several alien species made popular by Deep Space Nine. We saw the Trill again. Culber was briefly made to look Bajoran in the holo-ship environment. Burnham and Book encountered a Lurian in the Season 3 debut episode. As Season 4 continues to reexplore the galaxy as we know it, it seems likely we'll see familiar alien races again. If the Cardassians are members of the Federation, we could meet a bunch of Cardassian peaceniks in Season 4.

We may also see what became of a very old Cardassian-built space station. The Federation called it "Deep Space Nine" in the 2370s, but when the Cardassians built-it sometime before the 2360s, they called it "Terok Nor." If this famous space station is still around in the 32nd Century, it may have yet another new name. Could the USS Discovery visit this legendary space station in Season 4? Do people still use the wormhole? Back in the day, that was on the border of Federation-Bajoran and Cardassian space. But now, that's all the same territory.

If the USS Discovery does head back to Deep Space Nine in season 4, the heads of nineties Trekkies are going to explode.