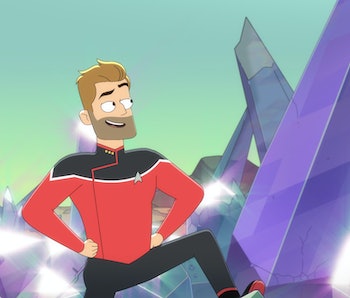 Star Trek: Lower Decks is set in 2380, which means the status quo of the Federation is close to how we remembered the TNG, Voyager, and DS9 eras. 2380 is five years after the end of the Dominion War, two years after Voyager returned from the Delta Quadrant, and one year after Data died in Nemesis. All the big shakeups that happen in Picard are still several years in the future of the Lower Deckers. That means Lower Decks probably can't mess up timeline stuff too much. Or so we thought.

Something happened in the final moments of Lower Decks episode 3, "Temporal Edict," that could change everything. If this is canon, it could have big consequences for Picard Season 2 and Discovery Season 3. Here's why.

In "Temporal Edict," Captain Freeman briefly cracks down on the crew of the Cerritos when she learns about "buffer time," the idea that a good portion of the crew slacks off a little bit after they're done with their required tasks. The episode lampoons the idea that in previous Treks, it's seemed like Starfleet Officers have a lot of free time, and that their actual jobs don't take that long to do.

By the very end of the episode, after the ship nearly breaks down because of too many deadlines, Boimler convinces Captain Freeman that not everyone can be a workaholic like him. So Freeman introduces "The Boimler Effect," which encourages Starfleet people to take however much time they need to finish tasks. (In other words, laziness is fine!) Boimler is horrified by having this policy named after him, since he so ardently behaves the exact opposite way. The other Lower Deckers assure him there's no way anyone will remember him for this.

Suddenly, we see a classroom in the "distant future," where a teacher explains "The Boimler Effect," and how it was named after the "laziest officer in Starfleet history, Brad Boimler." After that, the teacher pivots, to talking about Chief Miles O'Brien, who she claims is a stand-out member of Starfleet.

The instant-statue of O'Brien is our first legacy-character cameo, and the teacher also mentions that Boimler is holding "One of the Great Birds of the Galaxy," which is a reference to the nickname given to Star Trek creator Gene Roddenberry; "The Great Bird of the Galaxy." (Sulu also evoked "The Great Bird of the Galaxy" as a blessing in the episode "The Man Trap," the first episode of Star Trek that ever aired.) The scene also seems to reference the final scene in the 1973 film Battle For the Planet of the Apes, in which school children in the distant future are being told how all the characters were remembered.

Beyond the Trek and non-Trek references in this scene, the most interesting thing about this is that it takes place at an unspecified time in the far future. Lower Decks is canon, so this distant future exists somewhere in the Trek timeline, even if it is mostly a joke. What do we learn about the distant future?

Borg children go to school with humans and Ferengi — One of the school children is very clearly a Borg drone, who seems to have most of their Borg implants. Is this kid an XB from Picard? Or are they still connected to the Collective? Either way, this seems to establish that the Borg will exist well past the 25th century of the Trek timeline. If this Borg is still part of the Collective, that means they eventually made peace with the Federation. Could Borg integration be depicted in a future season of Picard?

Starfleet history is taught in the far future, but some of it is inaccurate — Season 3 of Star Trek: Discovery will take place in the 32nd century, which seems to be a post-Starfleet future. Booker (David Ajala) tells Burnham her badge must mean she "believes in ghosts." The trailers suggest that at some point in the 32nd Century, Starfleet – or at least the Starfleet we know — ceased to exist.

In the new Lower Decks flash-forward, the teacher is holding a pad with a classic Starfleet insignia. Clearly, she's got at least one thing wrong about Starfleet history: Brad Boimler was not a lazy officer. This implies that other myths and legends might have been spread about Starfleet over a long period of time. But, is this future post-Discovery season 3, or does this flashforward take place somewhere else?

There's a huge future-history we've only glimpsed — Because of episodes of Enterprise ("Shockwave") and Voyager ("Relativity"), we know Starfleet exists at least until the 31st century. Discovery Season 3 will finally nail down whether any version of Starfleet exists in the 32nd century, but beyond that, we really don't know.

Picard Season 1 takes place in the last year of the 24th century, meaning there are seven centuries of Starfleet history that we know nothing about. It seems very likely this flashforward scene takes place in one of those unexplored centuries. How do those centuries lead us to Discovery Season 3? If Lower Decks makes any more flash-forwards, we could be getting a preview of the future of Trek, through a series of well-placed jokes.