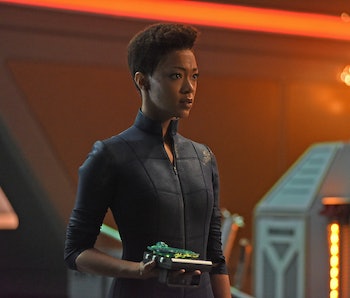 Star Trek: Discovery Season 3 debuts on October 15, 2020. That's just one week after the season finale of Lower Decks. This is something the franchise hasn't done since the nineties: provide roughly five months of uninterrupted new adventures in the Final Frontier. Here's why this matters for fandom, and what it might mean for the future of other franchises, too.

The third season of Discovery will begin on Thursday, October 15 and run for 13 episodes. Since Covid-19 quarantines began, post-production continued remotely, though most of the filming was completed well before the lockdown. Like Westworld Season 3, this season of Discovery was somewhat lucky that the remaining work on the show can be done remotely.

For the first time in three decades, new episodes of different Star Trek shows will carry fans along for exactly 23 weeks. Because Lower Decks starts on August 6 and runs through October 8, that means the stream of Trek will be uninterrupted through the end of the year and into the beginning of 2021. If you watched The Next Generation, Deep Space Nine or Voyager during their initial runs, this is old hat. In the '90s, the Trek franchise had multiple interconnected series running back-to-back. The final two seasons of The Next Generation aired over the course of 1993-1994, at the same time Deep Space Nine was debuting. Soon after, Voyager launched while DS9 was in its fourth season.

In 2020, the Trek franchise isn't quite as literal as that — in other words, don't expect the final episode of Lower Decks to directly reference the "missing" starship USS Discovery in the final episode. A full-on crossover between Picard, Discovery, and Lower Decks has yet to occur, but that doesn't mean it won't. In fact, with the Strange New Worlds and Section 31 shows in development, some kind of crossover event seems likely, if not a foregone conclusion. Could Trek pull-off something similar to the Arrowverse in the next few years? In 2022, could we be dealing with Crisis On Infinite Enterprises?

A Trek crossover event is inherently cool, but the more immediate impact on the rest of sci-fi fantasy TV is slightly more interesting. Other than the Arrowverse, there isn't a really contemporary good analog for a shared sci-fi/fantasy TV universe with multiple shows debuting and even more in development. Discovery Season 3 should arrive around the same time asThe Mandalorian Season 2 comes to Disney+. In almost every way, The Mandalorian is for Star Wars what Discovery is for Star Trek. Both shows launched new streaming services, and both take place in a unique timeframe in their respective universes. Just like Discovery Season 2 brought back Spock, Pike and the Enterprise, Mando Season 2 is pulling in legacy characters like Ahsoka and maybe, Boba Fett.

Star Trek is basically two years ahead of Star Wars in terms of carving out a streaming empire. And, relative to doing multiple TV series at the same time, Star Trek is 30 years ahead of Star Wars. Trek has proven time and time again that TV is a medium that allows fandom to grow exponentially. Dropping one limited series that lasts 10 weeks is fine, but there has to be some kind of follow-up. For 18 years (from 1987 to 2005), Star Trek ruled science fiction on TV because it churned out quantity. We can debate about the quality as much as we can debate about anything in nerddom, but anyone who visited a comic book shop or a toy store during those years will know this is true.

Pundits have claimed "franchise fatigue" is why Trek stopped for a while after Enterprise ended in 2005, but the recent growth of Marvel and Star Wars is a convincing argument that "franchise fatigue" is probably a myth. Instead, because streaming TV has redefined how and when people can watch TV, it's actually easier to gauge fandom interest over time. If streaming-only TV shows had existed back in 2005, it's arguable that Star Trek would have never been canceled. The advantage of streaming TV is that it can inherently cater to a niche audience. If there wasn't more demand for new Star Trek, there's no way CBS would keep adding new shows to their streaming platform. Some might say that it's all too much and that actually, "less is more," but again, if you consider how comic book reading culture works or the expansion of Marvel, that's barely true.

When we're talking bout sci-fi stalwarts with rock-solid fandoms like Star Trek, more is more. And it's coming at us at warp speed.