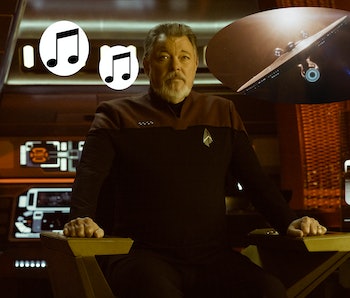 Season 2 of Star Trek: Picard and Season 3 of Star Trek: Discovery could have a very unexpected link to the mysterious in-development Star Trek feature film. For the first time since 1994, one element of production between the Star Trek films and TV shows may be exactly the same: The music. According to a new interview with composer Jeff Russo, the next Star Trek movie might sound very similar to Star Trek on TV. That could have bigger crossover implications. Wild speculation ahead.

Since 2017, Russo has composed the scores for Discovery, Picard and a handful of the Short Treks. (Though some of those have had guest composers, and have been overseen by another well-known Trek composer, Michael Giacchino. We'll get to that in a second.)

When he was asked by Flickering Myth whether he has been in touch with director Noah Hawley about the hush-hush upcoming Star Trek movie, Russo confirmed he has been talking to Hawley. Here's what Russo said:

"I have! We have spoken about it, and we’ve talked what he is going to want from a musical perspective, and how to approach it, and what the story is looking like it’s going to be, which is extremely exciting to me. But it was not by design. All of that was purely by coincidence, that I happened to be doing Star Trek, but also happened to be a frequent collaborator of the next Star Trek director. He’s also a fan, and a good friend of mine, so when I started working on Star Trek, we chatted about it, talked about it, had conversations about the storytelling, and the music, and the themes, and stuff. He’s one to definitely talk about music with me, so when he called to say that his film was in the works, I was extremely excited."

Since Russo did the music for some of Hawley's other projects – including Legion, Fargo, and Lucy In the Sky — this is a reasonable question. It may also represent an interesting crossover that hasn't happened since the '90s. If Russo composed the score for a Trek movie it would be a pretty big deal, and might suggest that elements from Picard and Discovery will cross over into whatever this movie ends up becoming.

What is the new Star Trek movie about?

At this point, we have no idea. Hawley described the movie as being "different," and also has strongly suggested it will involve new characters. As of February, current Star Trek TV executive producer Alex Kurtzman confirmed he has been in contact with Hawley about the film.

This makes sense, because since CBS and Viacom became one entity (after a very long time apart) the rights to Star Trek films and TV shows are now under one roof. If Kurtzman is in contact with Hawley over the next film, there's a very good chance that the next film will take place in the Prime timeline, and not the Kelvin timeline. Kurtzman is also no stranger to Star Trek movies. Along with Roberto Orci, Kurtzman co-wrote the screenplays for J.J. Abrams' Star Trek reboot and 2013's Star Trek Into Darkness.

Now, with Russo in talks with Hawley, that means two key players are crossing over from Trek TV to consult on the new movie.

The music of Star Trek films has a weird history with the franchise's TV incarnations. For the most part, the scores of Trek films were specifically created for those films, and only contain motifs or small tributes to the scores from TV. In 1979, Jerry Goldsmith's Oscar-nominated score for Star Trek: The Motion Picture effectively replaced the Star Trek theme song. In fact, what some fans might think of as The Next Generation theme, was used in The Motion Picture in 1979. Goldsmith went on to write more Star Trek TV and films scores (notably the film score for First Contact and the TV theme for Voyager). There was only one time in Star Trek history where the composer for an active Star Trek TV series also did the score for a Star Trek movie at the exact same time.

In 1994, Dennis McCarthy composed the score for the feature film Star Trek Generations. At the time, McCarthy was the primary composer for Deep Space Nine, and the recently ended Next Generation. Of all the Star Trek films, Generations is visibly the biggest crossover movie, since it's the only feature film to actually take place in both the original series 23rd-century timeline and the 24th century of TNG. McCarthy's music didn't make this crossover happen on its own, but it made sense for TNG to transition to the big screen with a familiar orchestral sound.

What will the next Star Trek movie sound like?

Russo might not end up doing the score for Hawley's Star Trek movie. Even if he does, it doesn't mean there will be a literal crossover between that film and Picard or Discovery. It's also possible that a new Trek project for the big screen could bring back Michael Giacchino, who has composed all three Kelvin-universe reboot films. In 2019, Giacchino was a "supervising composer" on Short Treks, and even directed one of the animated shorts, the nostalgia-laden "Ephraim and Dot."

So, a new Star Trek movie could sound like Picard and Discovery if Russo is involved, but since Giacchino is back in the mix, we could have something that sounds closer to the Kelvin universe than the current shows.

Either way, when a new Star Trek hits the big screens fans will be listening for familiar themes, which could hint at crossovers we never expected to see. If the Kelvin universe composer and the Prime universe composer are all working on Star Trek at the same time, a bigger Kevlin-Prime crossover isn't totally out of the question.

Could Jean-Luc Picard or Michael Burnham meet Chris Pine's Captain Kirk? Who knows. But maybe music will bring them together.