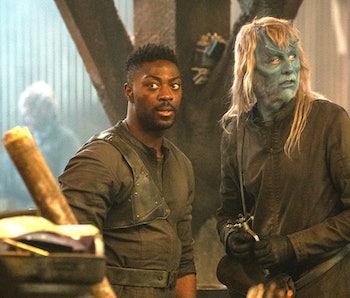 In Star Trek, it's not easy being green. But being blue can be even harder.

Since writer Dorothy Fontana invented the blue-skinned Andorians for the 1967 Star Trek episode "Journey to Babel," these antenna-ed aliens have been fan favorites. Even so, there haven't been many Andorians in major roles on Trek, a tradition that Discovery changes with its latest episode.

Noah Averbach-Katz — who plays Ryn the Andorian — has been part of the Trek family for quite some time. Averbach-Katz is married to Mary Wiseman, who plays Sylvia Tilly on Discovery. He's also been a huge Trekkie since childhood. Averbach-Katz spoke with Inverse about how his deep love of the least popular Star Trek series was instrumental in bringing Ryn to life.

Historically, the self-sacrificing, timid Andorian isn't something we've seen before. As a long-time fan of the prequel series Star Trek: Enterprise, Katz went back to the greatest Andorian of them all — Shran — in order to really figure out what his take on Ryn was going to be like.

"I re-watched Journey to Babel,” of course," Averbach-Katz says."That's just to get your Andorian history. But really, I also watched every episode of Enterprise with Jeffrey Combs as Shran. I used his performance as a sort of template for the Über-Andorian. Everything I do comes off that template. For a species that has been around since the beginning of Trek, it’s interesting how little lore there was. It was cool to see how Combs invented the canon and disposition of this species."

Although widely regarded as the least-loved of all the Trek spin-offs, Averbach-Katz enthuses that he unabashedly loves Enterprise. Upon revealing that he was playing Ryn in Episode 6 of Discovery, Averbach-Katz tweeted a self-made video montage of all of his childhood photos at Star Trek conventions with his parents, set to the saccharine theme song of Enterprise, "Faith of the Heart." The video concludes with candid shots of himself, both in and out of makeup with his real-life spouse and other Discovery cast members.

"My mom is a big Trekkie. She would drag me to the conventions. She would have these Star Trek parties — we would have all my friends over and watch the new episode of Enterprise. I’m one of the rare Trekkies who really grew-up on Enterprise. I not-so-secretly loved it. You’re kind of not supposed to, but I loved it."

Averbach-Katz isn't just a fan who happened to get married to a Star Trek actor and then become an Andorian. He also auditioned for the role of Spock in Discovery Season 2.

"Funnily enough, that was dummy script. It wasn't Spock. It was an Andorian named Tom. But I knew it was Spock right away," Averbach-Katz says. "Obviously, I didn’t get it, and Ethan did a great job. But, they really liked my take and they could see that understood the Star Trek genre. Then I got an audition for this character. I don’t know if they had me in mind, maybe I was the only person. Or maybe I was just the right one."

As much as Averbach-Katz was inspired by Combs portrayal of Shran, the Discovery star says Ryn is basically the reverse of the Enterprise character.

"What [Shran] does so well is present this proud and confident species. But, what’s great about his arc in Enterprise is underneath that is a deep sensitivity, and underneath that sadness and pain and loss and joy," Averbach-Katz explains. "For Ryn, it's the opposite. He’s been tossed aside and almost destroyed. His confidence and bombast have been stripped away. His journey is building all that back up, getting all the bluster of what makes an Andorian laid out."

Averbach-Katz can't say how long he'll be on the series, or if Ryn appears in Season 4, but he did reveal he's been making the most of his downtime by playing Dungeon and Dragons with his Discovery castmates over Zoom. (He's the DM.) He describes it not only as "an opportunity to have fun and share stories that aren’t just about work," but also says it's also given him a chance to get to know Blu del Barrio and Ian Alexander better.

"They are such a hugely important addition to the current Star Trek. They are the new vanguard of what Star Trek is gonna be," Averbach-Katz says. "This is how younger generations will relate to this show, through Adira and Grey. I couldn’t think of better ambassadors than those two."

Star Trek: Discovery is streaming now on CBS All Access.