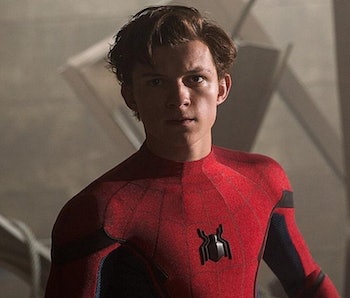 The cast for Spider-Man: No Way Home is stacked.

In addition to Tom Holland, Zendaya, and Jacob Batalon, the film may also feature appearances from actors who starred in Sony’s past Spider-Man franchises, including Tobey Maguire, Andrew Garfield, Alfred Molina, and others. Of course, those latter actors have yet to be officially confirmed by Marvel and Sony, but at this point, there’s very little reason to believe they won’t be in it.

The film’s cast may not just be limited to past and present Spider-Man stars either. It’s also heavily rumored that Charlie Cox will reprise his role as Matt Murdock in the film, and some new set leaks suggest he won’t be the only Daredevil alum appearing in No Way Home.

The Leaks — A new leaked set photo from Spider-Man: No Way Home reveals a high-rise apartment built specifically for the film. While it’s unclear exactly who the apartment might belong to, one Reddit fan noted that the set seems to resemble strongly, from the outside at least, the apartment Wilson Fisk (Vincent D’Onofrio) owns in Netflix’s live-action Daredevil series.

The image’s leak comes just a little over a week after another No Way Home set image leaked online, one which offered a behind-the-scenes look at a scene between Holland’s Peter Parker and Benedict Cumberbatch’s Doctor Strange.

The King’s Castle — While it has been rumored for a while now that Charlie Cox will be in Spider-Man: No Way Home, word of D’Onofrio appearing in the film only started circulating online a little more recently. However, it’s not hard to see why so many Spider-Man and Daredevil fans are starting to believe the actor will be reprising the iconic comic book role in the film.

Like Matt Murdock, Wilson Fisk has a complicated and long-standing relationship with Spider-Man in the comics. It’d make sense for the villain to cross paths with Holland’s Peter Parker on-screen. Outside of that, though, it’s also been heavily rumored in recent months that Marvel Studios is planning on bringing several of the actors and characters from its canceled Netflix series back into upcoming MCU projects.

Building off that, recent reports also suggest that both Cox and D’Onofrio may be reprising their Daredevil roles in Marvel’s Hawkeye Disney+ series as well as the Echo spin-off series that’s in the works right now. So, in addition to the actual, unsubstantiated reports saying that he’ll be in the film, there have been enough rumors up to this point related to D’Onofrio returning as Fisk to start suspecting that he actually will reprise the role sometime very soon.

Whether he shows up as Fisk in Spider-Man: No Way Home, Hawkeye, Echo, or all three, remains to be seen.

The Inverse Analysis — It’s hard to know, as of now, if the apartment that’s featured in this new No Way Home image is actually Wilson Fisk’s or not. Since the film is (presumably) set largely in New York, it’s possible that several different characters could live in an apartment like the one in the image. That said, it does look a whole lot like the apartment Wilson Fisk had in Daredevil, and based on many of the rumors currently surrounding D’Onofrio’s future in the MCU, it’s entirely possible that it is.