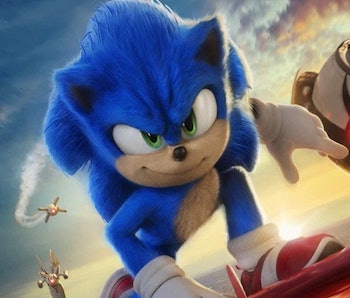 About halfway through Sonic the Hedgehog 2, Sonic and his new buddy Tails find themselves seeking shelter from a Siberian blizzard in a dangerous Russian dive bar.

Out of context, this scene might suggest Sonic is getting a gritty reboot in the style of The Batman, but if you’re having second thoughts about bringing your kids to see Sonic 2, you can go ahead and buy the tickets now.

A few moments later, Sonic and Tails are pulled into a dance battle against squatting Siberians. And a few scenes after that, Sonic snowboards down a mountain while evading Dr. Robotnik’s drones and his new enemy, Knuckles, while cracking jokes about Marvel’s “Winter Soldier.” Get it? Because there’s snow?

Unlike most modern Hollywood franchises, Paramount’s video game-inspired movie series isn’t trying to change the way you think about its starring characters. Instead, Sonic 2 is a movie based on a video game seemingly designed to launch new video games (I can’t wait for the Sonic x Dance Dance Revolution crossover). In the process, it miraculously manages to be a great action-comedy, even if it can’t quite measure up to the unexpected success of 2020’s Sonic.

The plot — Sonic 2 picks up where the last one left off, although it doesn’t matter if you’ve seen the original so long as you’re familiar with the basic concept of a lightning-fast blue hedgehog voiced by Ben Schwartz.

Sonic’s chief antagonist Dr. “Eggman” Robotnik (Jim Carrey) is trapped deep in outer space on a Mushroom Planet, but he’s soon rescued by Knuckles (Idris Elba), an alien echidna determined to get revenge on Sonic by securing the all-powerful Master Emerald. Meanwhile, Sonic is visited by Tails (Colleen O'Shaughnessey), an alien fox with the ability to fly who arrives to tell Sonic he’s in danger.

With new alliances established, the two sides set off on a globetrotting adventure that’s half Indiana Jones and half The Angry Birds Movie. The entire thing culminates in an epic race through a maze-like dungeon hidden under the ocean, followed by a slightly less epic giant robot battle. The plot of Sonic 2 probably won’t surprise you, but it won’t bore you either, even if this 2-hour movie could have easily been trimmed down to 90 minutes by director Jeff Fowler.

The acting — For parents and nostalgic-but-childless Millennials, the best part of 2020’s Sonic was the return of a Jim Carrey we hadn’t seen in years. The actor’s take on Dr. Robotnik arguably sits alongside his iconic roles in Ace Ventura, The Mask, and The Cable Guy, even if the rest of Sonic is a Bruce Almighty-level movie at best.

Unfortunately, Carrey simply isn’t giving it his all in Sonic 2. Most of his dialogue seems designed to move the plot forward or provide color commentary for Sonic and Knuckle’s fights. Over-enunciating random words isn’t enough to make us laugh. His penchant for physical comedy is also restricted by various CGI vehicles, including his classic hovercraft and a giant mech-robot.

On the plus side, the voice acting for Sonic, Tails, and Knuckles is all excellent. Ben Schwartz continues to prove he’s the right choice to voice Sonic, while Idris Elba plays Knuckles with a perfect deadpan delivery that makes me wonder why he’s not cast in similar live-action roles more often. Colleen O'Shaughnessey, who’s been the voice of Tails in various formats since 2014, more than holds her own alongside these stars.

The Inverse analysis — Sonic 2 isn’t trying to change the world (or even change movies), and that’s fine. In an era when Batman is no longer for kids and Marvel is slowly veering into horror, Sonic has a chance to make a movie that’s actually meant for children — even if that means 30-something fans of Jim Carrey and the original Sega games might leave feeling unsatisfied.