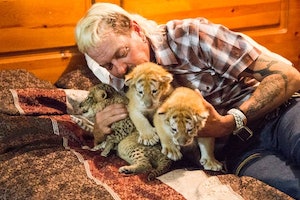 Shows like 'Tiger King': 8 sensational documentaries to fill the void

Tiger King is an incredible story, but it's only seven episodes long. And speaking from personal experience, rewatching it over and over doesn't provide the same high as the first time. So until there's more — or until that Kate McKinnon series comes out — you may be experiencing some withdrawal.

If you're looking for a show like Tiger King to laugh, gasp, and cry at, here are eight underrated, off-the-wall documentaries that will leave you questioning how they could possibly be real.

A journalist chases what he thinks will be a lighthearted human interest story about the world of endurance tickling... and instead finds himself embroiled in a dark world of deception, blackmail, deceit, and possibly a fetish community.

Tickled caused a sensation due to its weird, twisting story, and taking the film on the festival circuit was so eventful it prompted a follow-up special.

7. Dear Zachary: A Letter to a Son About His Father

Dear Zachary is probably the most heartbreaking documentary ever made. Unlike most tearjerker docs, Dear Zachary follows the filmmaker as he chronicles the life of his late best friend as a service to his son Zachary.

What starts as a solemn mission turns into a fight for custody and justice. It's a true-crime documentary, but the focus never wavers from the victim and doesn't stand to sensationalize the perpetrator. Keep the tissues close for this one.

Part of the reason Tiger King is so fascinating is the way big cats seem to attract big personalities. The same can be said of wealthy collectors. Sour Grapes explores how one wine-tasting wunderkind, Rudy Kurniawan, upended the entire wine market single-handedly.

Just when you think it can't get any more absurd... the Koch brothers get involved. Without spoiling anything, the final reveal will leave you dumbfounded.

A teenage boy goes to college and finds his doppelgänger. The story gets picked up by the news and a third identical boy comes forward. What they thought was just a weird coincidence slowly contorts into a story of medical ethics, blended families, and what truly makes us who we are.

The boys' personalities shine throughout all the archival footage, keeping the tone light, despite the surprisingly dark tone of the film.

In some ways, Wild, Wild Country paved the way for Tiger King: Netflix released this docuseries produced by the Duplass brothers in 2017, and it inspired an SNL skit and a hilarious two-part parody on IFC series Documentary Now!

The cult documentary is a subgenre unto itself, and the stories of the Rajneeshpuram exemplified all the best parts: the charismatic but mysterious leader, the absurd schemes, and the epic rise and fall.

The Wolfpack is a documentary for film buffs. It details the life of six brothers who were held captive inside a Manhattan housing project by their strict father. Their only escape was movies, and they spent their time painstakingly transcribing their favorites and producing shot-for-shot remakes, including replicated props and costumes.

It's a love letter to the healing effects of cinema, plus some added reflection on what isolation can do to people.

Don't F**k With Cats marks a new era in documentary filmmaking: Internet documentaries. A Facebook group is spawned to hunt down the creator of horrific animal cruelty videos (don't worry, nothing is shown) and sparks a worldwide manhunt that leads to a web cafe in Germany.

After all Joe Exotic's harping on "crazy animal rights people," it's nice to see them in the starring role of their own doc.

McMillion$ took an American mainstay, the McDonald's Monopoly sweepstakes, and peeled back the curtain like the stickers on so many burgers. What's revealed is a world of Mafia dons, blackmail, and an FBI sting operation straight out of a movie. The star of the show is a certain FBI agent who comes up with the bright idea of luring winners to make a statement by promising them a trip to Vegas.

It's a true-crime documentary, but more than that, it's a human story.

More like this
Entertainment
Feb. 2, 2023
Everything Wrong with Netflix’s New Password-Sharing Rules
By Dais Johnston
Science
19 hours ago
The Weirdest Sci-Fi Apocalypse on Netflix Reveals a Controversial Field of Medicine
By Tara Yarlagadda
Entertainment
Feb. 2, 2023
The DC Universe is Taking the HBO Approach With Its TV Shows
By Dais Johnston
LEARN SOMETHING NEW EVERY DAY.
Related Tags
Share: