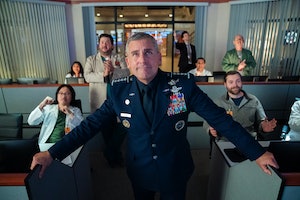 shows for fans of office absurdity

With Netflix's new comedy series Space Force less than a month away, there's just enough time to educate yourself on the weird world of the workplace comedy: from space to tech to the White House, these shows offer a glimpse into how the sausage gets made while also supplying plenty of laughs. So before Space Force premieres on May 29, here are five shows to check out.

One of the best conceits used in comedy is someone in power who doesn't necessarily know what to do with it. In Silicon Valley, that, plus a healthy dose of eclectic characters, made the show a sleeper hit for HBO. The show follows Richard Hendricks as he tries to establish his own tech company in the cutthroat world of Silicon Valley.

Much like Space Force, this show takes real-life entities and fictionalizes them, so it's about as realistic as these shows get, but it doesn't take an IT genius to realize what chat, search, and mail company Hooli is supposed to represent.

Calling this BBC show creative would be a gross understatement, its unique style of dialogue inspired a word of the year. Calling it crude would also be an understatement, as that word, omnishambles, was a rare family-friendly insult used by Malcolm Tucker, the antiheroic scene-stealer of The Thick of It.

Tucker is the Director of Communications of the show's fictionalized British government. The show follows the Department of Social Affairs and Citizenship as they try to stumble their way through policy announcements and reshuffles. Its distinct tone and voice went on to influence many other shows on this list.

From a BBC show, to a BBC show about the BBC. W1A draws the curtains and shows what exactly goes into creating the television we love to watch, and how that television much grow and evolve in an increasingly digital role. Downton Abbey star Hugh Bonneville leads this cast, each with their own distinct quirk but the same ambitious streak.

Framed as a behind-the-scenes documentary, Doctor Who alum David Tennant provides narration and the scenes are intercut with jazzy music and B-Roll footage. Even if you don't watch much BBC, it's still a hilarious watch.

America's answer to The Thick of It grew into a league of its own, and most of that is due to Julia Louis-Dreyfus's unforgettable portrayal of Vice President Selina Meyer. Much like The West Wing, it covers the day-to-day activities of the White House, but instead of long monologues, these leaders speak in colorful metaphors and witty banter, making it one of the most joke-packed sitcoms out there.

One of Veep's greatest strengths is its ability to seamlessly weave emotion in with all the comedy without darkening the shows tone, and with a combination of impeccable writing and controlled acting, Veep delivers a fantastic emotional punch in its final season.

House star Hugh Laurie's guest run in Veep led to him nabbing the starring role in Avenue 5, which follows a cruise ship that gets knocked off course. The twist? It's a spaceship, and the detour would leave them stranded for years. Avenue 5's vision of the future is comedic, but one thing won't change with the passing years: how people react to a crisis.

Avenue 5 can often feel like The Thick of It in space, but it has one trick up its sleeve: Josh Gad, playing space travel magnate Herman Judd. Judd was written as an over-the-top millionaire, but one glance at his flowing blond locks and the subtext becomes a little less obvious: the Trump parallels write themselves.