“I don't take any responsibility at all.” 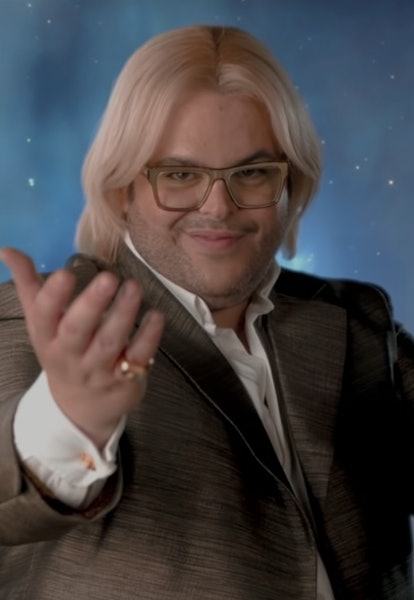 There's no shortage of political satire on TV right now.

You can probably rank all the late-night talk show hosts right now based on the quality of their Donald Trump impression (I'm a fan of Colbert's) and even the usually apolitical Larry David opened the new season of Curb Your Enthusiasm by donning a red MAGA hat to become a social pariah (Trump mistakenly tweeted a clip). But the sharpest critique of the U.S. president isn't coming from late-night TV or even Larry David: It's coming from HBO's new sci-fi comedy Avenue 5.

This shouldn't come as a surprise. Avenue 5 is the latest creation of Armando Iannucci, the creative genius behind Veep and The Death of Stalin, two stories that wore their political satire on their sleeves. But with his new series, he's is trying something a little more subtle, forcing fans to look a little closer for meaning.

Warning! Full spoilers for Avenue 5 below.

Ahead of the show's premiere, Iannucci hinted that Avenue 5's story of a space cruise knocked off course in the near future was a parable for Twitter and social media in general, telling The Hollywood Reporter:

"The last three or four years, things have gotten slightly toxic on social media, and people are shouting at each other and getting into their own group and not wanting to be with other groups — just a sense of all of this is going on, there's just this impending doom that people are going, 'Why aren't we sorting this out?' So that was the starting point. I thought, 'Well, why don't we look at if we put a massive crowd in an enclosed environment and put some people who look like they know what they're doing at the center of it, what could possibly go wrong?'"

With Season 1 of Avenue 5 finished, this initial pitch holds true. The series is an exploration of mob mentality at its worse, revealing how frenzied horde psychology enabled by the internet endangers both individuals and the entire group. But it would impossible to analyze social media without at least referencing one of its most prodigious users: Donald Trump, who treats Twitter like a bullhorn to spew his vitriolic nonsense directly to the masses and twisted Facebook into a tool of misinformation to win the 2016 election.

Herman Judd (Josh Gad), the idiotic CEO aboard his own marooned space-cruise-ship, isn't as effective or nefarious as Trump, but he serves as a decent foil, illustrating the power and influence a misinformed leader can have in the age of social media. Judd acts impulsively, feeding into the worst instincts of the mob and recusing himself of any responsibility when things go wrong. His greatest accomplishment in nine episodes is shining colorful lights on a sphere of feces enveloping the ship (long story, but it works).

In one episode mid-way through the season, the mob turns on a hapless passenger Andy Buckley (David Wallace from The Office) and starts chanting "shit him out," literally demanding that Buckley's character be ejected from the ship into the void of space to die. Caught up in the moment, Judd repeats the chant (essentially retweeting the initial message) and fueling the fire to the point where Buckley is almost actually tossed into space.

Later, Judd's advisers scheme to slip him sleeping pills in an effort to take him out of the equation and mitigate the damage. Aside from the sleeping pills, it all feels way too familiar.

Several episodes later, society onboard the ship breaks down as multiple passengers rush into the airlock, convinced they're not actually in space and the entire experience is some twisted reality prank show. Of course, they are in space and each passenger instantly freezes to death as hundreds more look on in horror. Judd is there too, refusing to take responsibility or even attempt to calm the crowd.

At this point, if you told me Iannucci also wrote Trump's "I don't take any responsibility at all" coronavirus speech I wouldn't even be surprised.

Finally, in the last moments of Avenue 5 (which aired last night on HBO), it seems the ship may finally correct its course. A list ditch attempt to eject everyone's personal belongings gains momentum while a small rescue ship arrives to bring Judd back to Earth.

Of course, nothing goes right. The ejected belongings only extend the voyage, and Judd bails on returning to Earth after realizing everyone there hates him even more than the people onboard. On Avenue 5, the Judd presidency will continue for eight more years (assuming the show gets renewed, of course), and if Iannucci's new show is as prophetic as it appears to be, we might be on course for another four (or somehow eight) more years of Trump as well.

Avenue 5 is streaming now on HBO.