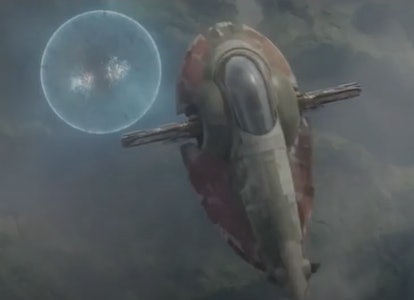 It was only a matter of time. From the moment The Mandalorian revealed Boba Fett's famous ship, fans have been waiting for the bounty hunter to deploy his deadliest tool: seismic charges. And in Season 2 Episode 7, Slave 1 makes good on that promise, using the iconic weapon to escape an Imperial base.

It's an epic moment that had me shouting at my laptop screen, but it also reveals why Obi-Wan Kenobi is even more of a badass than we thought after going toe-to-toe with Jango Fett and a couple of seismic charges back in Attack of the Clones. Warning! Spoilers below for The Mandalorian Season 2 Episode 7.

Seismic charges in The Mandalorian

In the latest chapter of The Mandalorian, titled "The Believer" (who exactly is the believer, by the way?), Din Djarin assembles a crew to save Baby Yoda. The first step is freeing Mayfeld (Bill Burr) from New Republic jail and using his ex-Empire credentials to figure out where Moff Gideon is keeping Grogu. This means they have to visit an Imperial base to access the Empire's computer network. Of course, things don't go smoothly for Team Mando.

After Djarin and Mayfeld successfully sneak into the base in disguise, they end up stuck in a conversation with an evil Imperial officer. It goes south when Mayfeld brings up Operation: Cinder and our heroes have to shoot their way out. They make it to the roof with some helpful sharpshooting by Fennec Shand and Cara Dune, where Boba Fett picks them up in Slave 1. That's where it gets really good.

After a pair of TIE Fighters try to chase after Fett's ship, he deploys a seismic charge, which tears both of the Empire starfighters to shreds with a sonic blast of blue energy. It's awesome.

What is a seismic charge in Star Wars?

The "science" behind Fett's favorite defensive weapon is actually pretty interesting. According to Wookiepedia, the initial explosion sucks in all the sound in the surrounding area, which explains why everything goes quite right before it explodes. This leads to an even bigger explosion as the first blast collapses in on itself.

Aside from being used to blow up TIE Fighters, seismic charges were also helpful for clearing asteroid fields. Luke Skywalker even uses one in the canonical Star Wars book Heir to the Jedi, which takes place between A New Hope and Empire Strikes Back.

What seismic charges reveal about the Obi-Wan Kenobi show

With the latest news that Ewan McGregor's upcoming Disney+ show will also feature the return of Hayden Christensen as Darth Vader, it's worth pointing out that when Obi-Wan encountered a couple of seismic charges it went a lot better for the Jedi than it did for those unfortunate stormtroopers on The Mandalorian.

Of course, no one is trying to argue that Obi-Wan wasn't always a top-notch pilot, but as we gear up for Kenobi (or whatever it's called), it's worth remembering that just because old Ben Kenobi has been memed into oblivion doesn't mean he can't hold his own in the Star Wars galaxy.

The Mandalorian Season 2 is streaming now on Disney+.