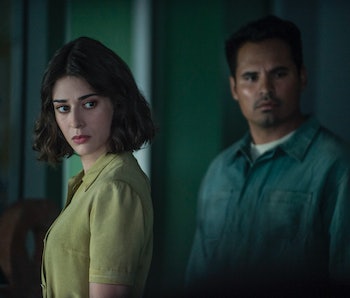 Alien invasion movies are a tried-and-true sci-fi genre. In the first act we’re introduced to our main character and the people they love, then aliens invade and they have to become an action hero in order to defend what they care about, ultimately learning an important message about themselves along the way.

It’s a story told so often it’s hard to find a new take on the archetype. But a movie streaming on Netflix adds a shocking twist so big you’ll immediately want to re-watch it to spot all the clues.

Extinction, a 2018 Netflix original directed by Joe Young, stars Michael Peña as Peter, a family man with recurring nightmares of an alien invasion. His wife Alice, played by the always delightful Lizzy Caplan, worries about his paranoia until there is a sudden invasion and all his worst fears come true... but not in the way he expected.

From the get-go, Extinction feels like just another alien apocalypse survival movie, never once scrimping on destroyed buildings and alien effects. Peter and Alice instantly snap into action, trying to protect their two young daughters from a fearsome alien.

I won’t reveal the shocking truth (here’s a spoilery breakdown if you want) but there’s a twist in the third act that feels straight out of Black Mirror or The Twilight Zone. It completely recontextualizes Peter and Alice’s journey, their family structure, Peter’s visions, and the world as they know it. David (Luke Cage’s Mike Colter) explains the truth in the movie’s last moments, turning the story from good to great and instantly changing some interesting choices in the first half.

If you turn on Extinction and feel like it’s yet another alien action story, resist the temptation to hit that back arrow and re-watch Stranger Things for the billionth time. This film is both cursed and blessed with its Netflix Original distribution: The viewing experience is only worth it after watching all 90ish minutes, and Netflix’s vast range of content doesn’t exactly encourage retention.

But as soon as you finish this movie, it’s basically a guarantee that you’ll want to switch from the Back button to the Start from Beginning one. A theatrical release would have ruined the awe-inspiring moment when you realize what the film has carefully planned and how all the clues were there; you were just too lulled into the familiar narrative, allowing for a perfect rug-pull out of what seems like nowhere.

If you’re missing Black Mirror and the lost art of the third act twist, Extinction may be enough to tide you over and provide hope that sometimes, a spoiler-y moment can be more than just a comic book character appearance or a post-credits scene. Sometimes it can turn a tropey action thriller into a masterclass in hiding in plain sight.

Extinction is now streaming on Netflix.

More like this
Culture
Jan. 17, 2023
Wednesday has become a smash hit, but it owes much of its success to its ‘90s predecessor
By Josh Bell
Science
Jan. 28, 2023
The best mystery thriller on Netflix ignores a basic fact about hydrogen energy
By Tara Yarlagadda
Culture
11 hours ago
Final Destination 2 Perfected the Art of the Gross-Out Kill
By Jon O'Brien
LEARN SOMETHING NEW EVERY DAY.
Related Tags
Share: