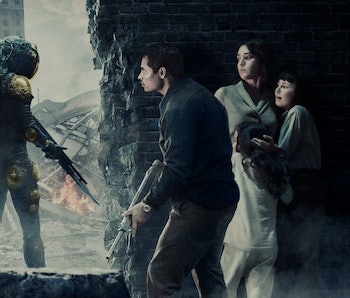 Grab a few of your favorite almost A-list actors, combine them with a sci-fi script that feels familiar-but-different, throw in some high-budget action, and you’ll get something like Extinction. The new Netflix original film feels like an episode of Black Mirror on steroids. Meaning that, yes, there’s a twist at the end, and also, yes, it’s worth watching the movie quickly before anyone can ruin it for you.

Thankfully, Extinction is now streaming on Netflix. So, the only thing stopping you from watching it is work, school, a social life, or whatever else might be keeping you away from your TV at the moment. Don’t worry. Just keep your head down to make it through the day, and then head home and watch this movie. In the meantime, here’s our spoiler-free review.

The premise of Extinction is deceptively simple. In a not-too-distant future, Michael Peña works at ill-defined “factory” where he reports to Mike Colter (Luke Cage), clocking in at 9 a.m. and leaving at 5 p.m. to go home to his wife, played by Lizzy Caplan. The pair have two young daughters, one still a happy child, the other a sullen pre-pubescent who spends her days riding up and down in their apartment tower elevator.

Peña plays the role of distracted family man perfectly, delivering just the right amount of dreariness over his unmistakable charm. “I just love the idea because you can’t help but like him,” director Ben Young tells Inverse. “The character is going through some family issues at the beginning of the film, but Michael was so inherently likable.”

Caplan also delivers an impressively restrained performance as a mother clearly dealing with her own, unaddressed issues. “Lizzy was doing some very subtle things I didn’t quite pick up on,” Peña says in a separate interview with Inverse. “I think she’s just great.”

Before you can even clock the issues bubbling under the surface, Extinction raises the stakes. Peña’s character begins having visions of a violent invasion. He dreams of hands bloodied by battle and alien spaceships shooting down survivors in the street. His wife pushes him to see a doctor, but nothing seems to help.

Then, the visions come true. The aliens arrive, and Peña’s visions are the only thing keeping them alive. Extinction quickly becomes a Cloverfield-style thriller as the family makes their way through the apartment tower, doing their best to avoid the murderous alien soldiers lurking around every corner.

Eventually, the true plot reveals itself and everything changes again. It’s a clever twist and one that will have you rethinking more than just the movie that preceded it. Extinction raises some interesting questions about our place in the universe, and the realization that we may eventually have to learn to share our world with another intelligent species other than ourselves. In a time of rapid technological advancements, from space travel to artificial intelligence, the future this movie lays out doesn’t really seem that far-fetched. It feels like something we should already be preparing for.

To reveal anything more would ruin the experience. Suffice to say that thanks to a combination of insightful commentary and an unexpected third act (not to mention great, understated acting and some pretty sweet sci-fi action), Extinction may be the rare Netflix original movie you actually watch twice.

Extinction is streaming now on Netflix.

More like this
Culture
6.25.2022 10:30 AM
You need to watch the most inventive Bruce Willis time-travel movie before it leaves Netflix this week
By Eric Francisco
Entertainment
22 hours ago
Stranger Things Season 5: How the Season 4 finale sets up the darkest chapter yet
By Dais Johnston
Entertainment
17 hours ago
Stranger Things Season 4 ending explained: How the emotional final episode foretells Season 5
By Mónica Marie Zorrilla
Related Tags
Share: