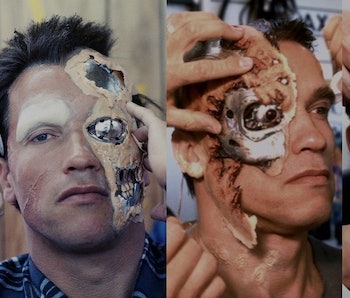 Last night, I found the Arnold Schwarzenegger vehicle The Sixth Day on Showtime, which is a nonstop, “Demolition Man”-level, futuristic clone-and-drone-paranoia film. It was a personal refresher that Schwarzenegger has lent his name and dumb body to an insane number of science fiction films over the years. None of us would have ever seen a Philip K. Dick adaptation without an Austrian body-builder lending his muscles to the cause.

That’s the thing about Arnold: in a very direct way, modern science fiction films would not exist without the tongue-in-cheek acting of a dude who barely spoke English in his first film. And that fact is worthy of some celebration.

Yes, I mean the same guy who drove California into the debt while he was Governor and who regularly agrees to do things like this with his career:

So how did Schwarzenegger shape modern science fiction? Let us count the ways.

Seven years before his breakthrough in the documentary Pumping Iron, Hercules (Schwarzenegger) is sent to Earth where he finds true love and starts a promising career in the bodybuilder business. It is Arnold’s first time on camera and while more fantasy than science fiction, it lays the groundwork for what came next.

A vengeful barbarian warrior sets off to avenge his tribe and his parents, slain by an evil sorcerer. After taking care of that mess, he goes on a quest for a princess. Again, more magic than science, but the combination of expressionistic filmmaking and brutality broke new ground for what cinema could get away with, even if it seems hokey now.

A human-looking indestructible cyborg is sent from 2029 to 1984 to assassinate a waitress, whose unborn son will lead humanity in a war against the machines, while a soldier from that war is sent to protect her at all costs. James Cameron’s stark, punk LA became the setting for a slasher film that was his sci-fi tinged response to Halloween and Friday the 13th.

This also launched what would become one of the biggest (and eventually most convoluted) franchises in cinema history. Terminator 2 hits in 1991, and everything else falls in line sometime afterwards (depending on what timeline you’re in).

A team of commandos on a mission in a Central American jungle find themselves hunted by an extra-terrestrial warrior in one of the finest examples of blending horror and the emotional weight of warfare this side of Jacob’s Ladder. Another franchise launch here.

A wrongly convicted man must try to survive a public execution gauntlet staged as a game show. Loosely based on a Stephen King novella, the adaptation opts to go so ridiculous sci-fi it becomes the Moonraker of Schwarzenegger’s career.

When a man goes for virtual vacation memories of the planet Mars, an unexpected and harrowing series of events forces him to go to the planet for real - or does he? This film brought Philip K. Dick to mainstream audiences, and if the producers had gone with the original star (Richard Dreyfuss) it is hard to see how this would’ve been a success.

With the help of a magic ticket, a young film fan is transported into the fictional world of his favorite action film character. This is where most millennials learned about meta jokes, and is at least on par with the needlessly complicated narratives of most straight-forward science fiction.

While sold as a straight-forward cop caper, there’s plenty of hi-tech sabotage and railgun technology to bridge this into the realm of hard sci-fi — complete with ridiculous computer hacking sequences.

Batman & Robin try to keep their relationship together even as they must stop Mr. Freeze and Poison Ivy from freezing Gotham City. Arnold with a freeze-ray and a bunch of henchmen that only show up under a blacklight is a good base — his Turtle Party Wagon and plans to destroy the world are far more science fiction than anything else in the Batman canon.

At the end of the century, Satan visits New York in search of a bride. It’s up to an ex-cop who now runs an elite security outfit to stop him. This was Arnold’s attempt to beat Constantine to the devil-murder game and it came out shockingly acceptable for a film with a soundtrack featuring KoRn, Limp Bizkit, and Powerman 5000.

In his last film before taking office, Arnold takes on the role of a pilot who meets a clone of himself and stumbles into a grand conspiracy about clones taking over the world. This one still has to be seen to be believed, and its legacy can be traced through dozens of films made while The Governator was out of the acting game.

And what’s he got next? A confirmed returned to Shane Black’s Predator sequel. Still, at the age of 68, he’s still helping forward the medium. So bless you, Mr. Universe, for all the barriers you’ve broken down.