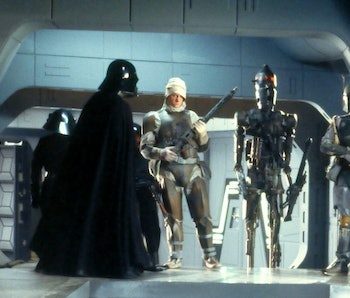 Forty years ago this week, the legendary Star Wars sequel The Empire Strikes Back hit theatres, introducing a slew of new characters and marking Boba Fett's first movie appearance. But alongside Boba was another bounty hunter who might not loom as large in the franchise, but who's role in the larger Skywalker Saga could be even more important.

Dengar Roth might not look like much in Empire Strikes Back, but he's a lot more intimidating in The Rise of Skywalker. So in honor of the movie's anniversary, let's take a closer look at this forgotten bounty hunter who played an unexpected role in this space opera's final chapter.

Dengar Roth, much like Boba Fett, was one of the motley crew of bounty hunters hired by Darth Vader in Empire Strikes Back to hunt down Han Solo. While Dengar lost out on the bounty to Boba Fett, he probably got the better end of the deal in the long run, avoiding the Sarlaac Pit and living to bounty hunt another day.

Aside from his role in Empire, Dengar also appears in an arc of The Clone Wars, getting up to more bounty hunter hijinks alongside Asajj Ventress. (In the CGI animated series, he was lucky enough to be voiced by British comedy icon and Star Trek actor Simon Pegg.) Those two appearances seemed to be all we'd see of Dengar Roth onscreen. That is until an entry in The Rise of Skywalker Visual Dictionary revealed a character with an oddly familiar name.

The entry notes that the name "Rothgar Deng" is "likely" an alias. While it's not the most effective name change, this page does all but confirm this is the bounty hunter formerly known as Dengar Roth. But why does he look like that? He's a human from Corellia, like Han Solo. While some 30-odd years have passed since his last appearance, that's not enough to account for this dramatic change.

The description in the visual dictionary suggests the change in look is due to Dengar going to black-market surgeons to optimize himself for his profession, which gave him a deformed appearance. In order to extend his life as a bounty hunter, Dengar equipped himself with a number of cybernetic replacements. Apparently, the guild doesn't provide the best pension plan.

What's interesting about Dengar's new appearance is how it seems to be an amalgamation of all the bio-enhancements we've seen on Star Wars villains before — mechanical arms, stormtrooper armor, and an "anguished rictus" that looks like a rough draft of Palpatine's melted face.

Now he's become one of the most experienced bounty hunters and emerged in a new form, could we see Dengar Roth (aka, Rothgar Deng) again soon? Perhaps he could make a cameo in The Mandalorian Season 2, considering it is a show entirely about a bounty hunter. Maybe that's who Timothy Olyphant is playing?

Even if his Rise of Skywalker appearance was the last we saw of him, it's good to know old Dengar still found a way to do what he loved, even if he became a cyborg along the way.