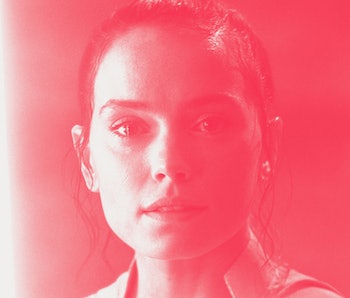 The Rise of Skywalker features two distinct Reys: the one who's completely aligned with the Resistance and the other, who cannot ignore her Force bond with Kylo Ren. It seemed like never the twain would meet, but a passage from the newly released novelization proves that Rey was tempted to use the Force to manipulate her closest ally.

While the book just hit stores March 17, some fans were able to get early copies at conventions, meaning the internet has been aflutter with chatter about leaked passages for a couple weeks. Reddit user TheMastersSkywalker posted part of a scene describing what happened when Rey parted with Finn, Poe, and Chewbacca on Pasana in far more detail.

We saw Rey use "Jedi mind tricks" way back in The Force Awakens, and it led many fans to believe then that she might be a descendant of Obi-Wan Kenobi. (Ah, simpler times.) So while this may not seem like such a massive reveal, Rey manipulating her friends is quite different than what we've seen Star Wars heroes do before. Apparently Rey doesn't have an issue with it, hinting that her Dark side impulses may shape her behavior to a greater extent than we realized. Could she also be manipulating the others in the Resistance for her own benefit?

The timing of this scene is especially interesting. It comes just before Rey accidentally "kills" Chewbacca by activating her Force Lightning, a power only previously displayed by Emperor Palpatine, which foreshadows the later reveal of their complicated genetic connection. This can't merely be coincidence, especially considering the recent reveal of a deleted scene showing Rey's Dark counterpart teaching her how to use that ability. Perhaps this instance of Rey impulsively using the Force on Finn was just a prelude to the overwhelming rage that overtakes her moments later.

While it doesn't seem like she was pushing Finn away as an act of malice, it may not have entirely been for the greater good. Unlike our other heroes – Finn, Poe, Chewie, Leia – Rey never feels like she's totally, overwhelmingly all-in for the Resistance. She's got her own goals in the story, and sometimes they overlap with her friends, sometimes they don't.

This is what makes Rey so complex: she's torn between what feels like her destiny to destroy Kylo (and therefore aiding the Resistance) and her destiny to join him. Fans can now completely dive into Rey's thought process in the novel, breathing new life into the film and the fandom.

The Rise of Skywalker Expanded Edition is available now.