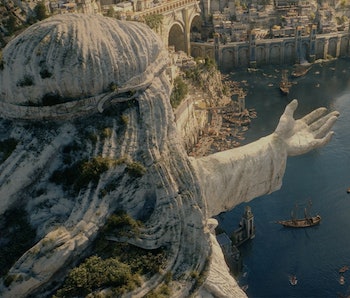 As Palantir, the 24th king of the grand isle Númenor, gasps his dying breaths in the Season 1 finale of The Rings of Power, he confuses a woman sketching his likeness for his daughter, Queen Consort Míriel.

Eärien (Emma Horvath) is urged by Palantir (Ken Blackburn) to touch the crystal ball in the tower above his bedroom. It’s a palantír, which provides visions of prophetic floods that shook even warrior Elven princess Galadriel (Morfydd Clark) to her core. Yes, the crystal ball has the same name as the king, don’t worry about it.

The thought of a great wave washing away this Kingdom of Men, just across the sea from Middle-earth, has weighed on Galadriel, Míriel (Cynthia Addai-Robinson), and Palantir. Did Eärien, sister of Isildur (Maxim Baldry) and daughter of Elendil (Lloyd Owen), see the same calamity, or did she discover something else within the orb?

Potential spoilers for the future of The Lord of the Rings: The Rings of Power ahead!

The vision of a tsunami viewers witnessed along with Galadriel and Míriel in Episode 4 completely washed away Númenor. According to Míriel’s father, the only way to avoid such a horrendous fate is to return to “the old ways” of embracing the Elves, rather than isolating from the rest of J.R.R. Tolkien’s world.

Although Amazon still doesn’t have the rights to The Silmarillion, a collection of myths and tales that tackles the rise and fall of Númenor in great detail, The Rings of Power seems to be staying close to the events explained in it, and later referenced in The Hobbit and The Lord of the Rings. In an interview with Vanity Fair, co-showrunner Patrick McKay said, “There’s a version of everything we need for the Second Age in the books we have the rights to.”

Serious readers of Tolkien’s work already know what will (likely) happen to Númenor in future seasons. Amazon could take a drastic turn and change the lore to better fit the prequel’s plots, but Númenor’s ruin is an essential event in Tolkien’s world that would be almost impossible to skip over.

How does Númenor disappear?

Think of Númenor as a stand-in for the legend of Atlantis, with a Tolkien twist. Númenor’s fortune comes after a dark period of misfortune, at least in Tolkien’s chronology.

A war in the First Age is fought against Morgoth, and the Valar deities gift Númenor to some of the human survivors as thanks for their sacrifice and fealty. The Númenóreans become not only financially wealthy during the Second Age but also temporally; they have lifespans far longer than the Men of Middle-earth. The only constraint placed upon them by the Valar is that the Númenóreans aren’t allowed in the Undying Lands, unlike the Elves.

However, when Sauron (Charlie Vickers) steps into the frame, Númenor’s luck switches drastically.

During the Second Age, the Elves, Númenóreans, and some Men and Dwarves go to war with Sauron and eventually drive him to Mordor. But his shadow falls upon Númenor. They begin to resent the Valar for not gifting them immortality, and they opt to rebel against them. The Númenóreans become tyrannical colonists, attempting to conquer swathes of Middle-earth.

Years later, the 25th and final king of Númenor, Pharazôn (Trystan Gravelle), sails to Middle-earth. Sauron is said to have brainwashed the king and his subjects by promising them the immortality they desperately desired if they worshipped Morgoth. The White Tree in Númenor was cut down and burned as a sacrifice, replaced with a 500-foot temple to the Dark Lord. Legend says that Isildur was able to rescue a fruit of the tree, which later grows to become the famed White Tree of Gondor.

Pharazôn assembles an armada to seize the Undying Lands and, as punishment, the Valar sink Númenor beneath a great wave, drowning all its inhabitants and the physical manifestation of Sauron (although that’s a minor setback for him). The aftermath of the disaster, which sunk several other small islands along with Númenor, was so intense that it literally changed Tolkien’s version of Earth from flat to round.

Númenor stays forever under the sea, while the Faithful, a faction of Númenóreans unswayed by Sauron, sail to Middle-earth before the tsunami reaches them, founding Arnor and Gondor.

The Inverse Analysis — Given how far into the Second Age Númenor’s downfall occurs, it’s unlikely we’ll see it disappear into the depths until we get closer to the series finale of The Rings of Power.

What seems more likely for Season 2 is that Eärien, though initially swayed by Pharazôn and Kemen’s anti-Elven propaganda, sees the fate of Númenor in the palantír. Perhaps a desire to save Númenor with no clear idea of how to do so causes tension between Eärien and her love interest, Kemen, and her employer, Pharazôn, as well as with her brother and father, who are both canonical leaders of the Faithful.

Regrettably for The Rings of Power fans, we may need to wait two years to see what happens in Season 2. Until then, we can only hope that we’ll get to see more of Númenor’s beauty in subsequent episodes before it all drifts away.

The Rings of Power Season 1 is available to stream on Amazon Prime Video.