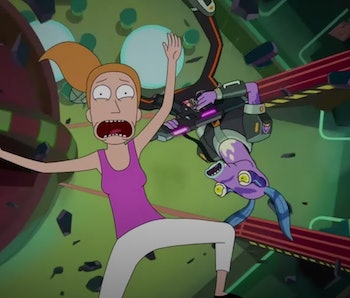 Keeping all the Ricks and Mortys of the infinite multiverse straight is something akin to nailing Jell-O to a tree. It takes a clear head, a strong stomach, and a handy NASA-lent slide rule.

Last week’s premiere episode, “Solaricks,” gave Rick and Morty a fresh start after confirming that Rick’s portal gun no longer works now that the Citadel is no more. But things take a turn for the worse when Rick accidentally resets all portal travelers instead of the portal index, which leads to a dizzying reboot of everyone launched back to their original universes.

This premise leads to a few shocking revelations. For one thing, the popular Rick and Morty “ticket theory” was apparently correct, as revealed when Jerry is zapped back to his original universe before he got mixed up with another version of himself at Jerryboree.

More important, however, is the fact that our Morty is actually the one from the same universe as the evil version of Rick (aka, Rick Prime) who murdered our Rick’s wife and daughter. The reason our Rick picked this Morty was in the hopes of setting a trap for Rick Prime, who seems to be the new main villain now that “Evil Morty” is out of the picture.

In other words, it was a very canon-heavy episode. If that’s what you’re into, you’re probably pretty satisfied. But if you prefer your Rick and Morty lighter and goofier, then you’re in luck. Season 6 Episode 2, “Rick: A Mort Well Lived,” trades lore for fun with a hilarious die-hard reference and a call-back to another classic joke that you can probably figure out based on the title alone.

We won’t say anything more here, but if you’re wondering about the Rick and Morty Season 6 Episode 2 release time and any other crucial details, we’ve got you covered below.

When is the Rick and Morty Season 6 Episode 2 release date?

What is the Rick and Morty Season 6 Episode 2 release time?

How many episodes of Rick and Morty Season 6 are left?

This sixth season of Rick and Morty will consist of ten episodes. After this week’s chapter, there are eight episodes left.

Here are the chapter titles in order:

What is the plot of Rick and Morty Season 6 Episode 2?

“Rick: A Mort Well Lived,” will be the second chapter and it takes place in the popular alien arcade Blitz & Chips, with Rick and Morty playing a video game called Roy. When Morty becomes trapped, it’s up to Summer to help save him but it requires reenacting a Die Hard plot even though she’s never watched Die Hard flicks and the alien terrorists are Die Hard experts.

Who is in the cast for Rick and Morty Season 6?

All the usual suspects are returning for Season 6’s vocal cast, with Justin Roiland doing double as both Rick and Morty, Sarah Chalke reprising her portrayal of Beth, accompanied by Chris Parnell’s role as Jerry and Spencer Grammer assigned to Summer.

Is there a trailer for Rick and Morty Season 6 Episode 2?

Yes, Adult Swim just released a teaser for the next episode, “Rick: A Mort Well Lived,” and it’s a fun little peek at a bold Summer dropping in on the alien arcade for a firefight and surprising a weird extraterrestrial creature captivated with flashing Skee-Balls lights.

Will there be a Rick and Morty Season 7?

Creators Justin Roiland and Dan Harmon have inked a deal with Cartoon Network that keeps Rick and Morty for at least one hundred episodes. That should get us to Season 7 and beyond. While the scripts are reportedly finished, there’s no official release date, but the show’s producers did confirm to Inverse that Rick and Morty fans won’t have to wait for more than a year between seasons moving forward.