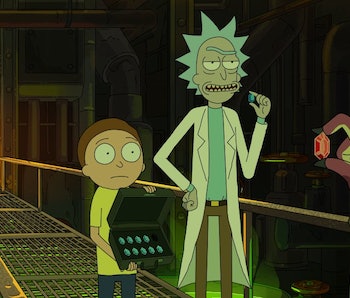 It's been almost five months since the Rick and Morty mid-season finale, “Rattlestar Ricklactica,” aired on Adult Swim, but nobody could have seen the "Never Ricking Morty" twist coming: Almost nothing from the trailer for Season 4 was "real." It's the biggest Rick and Morty fakeout ever.

Instead of "Interdimensional Cable 3" or the second "Morty's Mind Blowers," the Rick and Morty Season 4 anthological clip-show episode format took an even more meta approach that's incredibly dense. In "Never Ricking Morty," Morty and Rick are trapped aboard a neverending circular story train (cue the Snowpiercer references) meant to poke fun at the Story Circle method used by Dan Harmon to craft episodes.

In practice, that means each new subway car, they meet new characters that have an anecdote about Rick Sanchez. But eventually, the entire narrative unravels and spins outward into a bizarre refraction of itself to a dizzying extent. The major villain, Storylord, wants to extract the potential narrative energy from the duo to somehow break the "Fifth Wall," and it leads us to slip into alternate planes of existence that prove immersive for the characters just like the Roy: A Life Well-Lived game.

Paul Giamatti's Storylord, on some level, feels an awful lot like the Dream Lord from the excellent Doctor Who story "Amy's Choice," where a twisted foil to the Doctor traps him inside a nightmare with his companions — only they aren't sure what is truly real or what isn't. Only by embracing death in the dream do they survive.

Rick and Morty's versions is more than a bit bonkers, but one thing's for sure: All of those teasers about Evil Morty, Tammy, and Birdperson returning were not "canon," meaning that none of it really happened. This episode winds up openly admitting to toying with our expectations. Which sort of makes "Never Ricking Morty" the most and least satisfying episode ever simultaneously. Yeah, the show's really running on quantum full throttle. Truly, Rick would be proud.

Almost every piece of footage featured in the trailer for "The Other Five" episodes was used for a random clip in Episode 6, with the exception of the face-hugger creatures. A throwaway line of dialogue confirms that a confrontation with Evil Morty's armies is part of their potential future, but the imagery from the trailer has been used up on what was ultimately a fakeout. Don't expect Snuffles or Tammy to return, either.

While it might be disappointing that we may not get a grand resolution for the Evil Morty story arc, it does mean none of us have any real idea about what'll happen in future episodes. We still have 64 Rick and Morty episodes left in that tall 70-episode order, and the show's creators broke even more storytelling conventions to convince the audience that it won't be a boring ride.

As Rick and Morty struggle in this episode against their own narrative conventions in mind-bending ways, a series of super-buff villains and heroes trickle in and out to drop hints that none of this is actually happening. And that, miraculously, includes Jesus Christ with some cut abs. It's new levels of outrageous and entertaining sacrilege.

In the end, we finally learn that Rick and Morty experience everything from this episode because Morty bought Rick a never-ending story train from the Citadel, and the show's creators use this as a vehicle through which to make a cutting comment about consumerism while also chasting our own lofty expectations.

And despite estimates that making an episode of the show takes at least 9 months, Episode 6 somehow even dropped a timely nod to consumerism in the time of coronavirus.

"Nobody's out there shopping with this virus!" Rick says in the episode's closing moments, an earth-shattering and ultra-timely wake-up call to snap us back to reality.