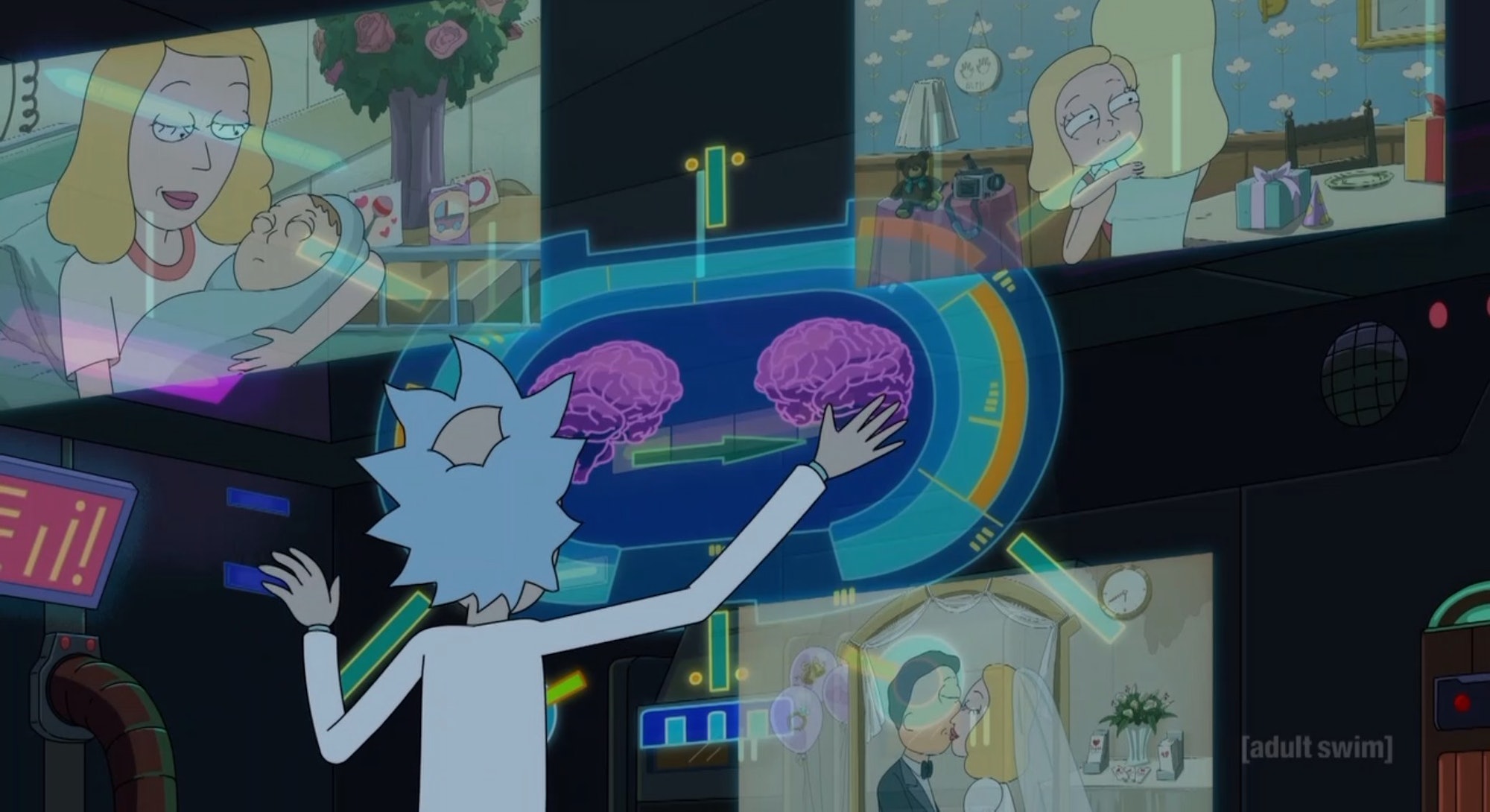 Rick and Morty rarely gets emotional, but when it does, the adult animated comedy punctuates the series' most complex moments with powerful music that helps explore the depths of Rick's depression, and series composer Ryan Elder is the musician behind some of the show's darkest scenes.

The Season 4 finale, "Star Mort Rickturn of the Jerri," gave us one such moment: As Rick watched his own preserved memory of cloning his adult daughter Beth, only to realize he would never know which version of her was the real one, a mournful and contemplative song titled “Don’t Look Back” by Elder and Lauren Culjak (better known as her stage name Kotomi) played in the background.

“I knew it needed to have organic elements to really bring that human feeling to it couldn't be totally robotic-sounding music,” Elder tells Inverse of the track, noting that it's inspired by the "chillwave" genre. The final product is ethereal and wistful in tone with lyrics that convey a sense of mournful regret but also an outcry to heal and move on.

This emotional revelation is a cutting indictment of Rick’s character, made all the more potent as “Don’t Look Back” plays in the background. Decider called it “haunting and emotional,” noting that Culjak’s known for her “lush, ethereal vocals.” Adult Swim even published a music video for it that cuts together various scenes from Season 4.

Late in Season 3, Rick offered to clone Beth so that she could go out and explore the universe while her double stayed behind with the family. A feeling of uncertainty hung over the show until a second Beth showed up on Earth in the Season 4 finale. After dealing with an alien invasion, Rick invited the whole family — plus an extra Beth — to gather in the garage to watch a memory he’d removed from his own mind using "Mind Blower" technology. (And because it's red, we know Rick considers it a memory where he messed up.)

As it turns out, Rick couldn’t bear to choose which version of his daughter stayed on Earth and which disappeared into space. So he removed the labels and shuffled them. Because they’re identical in every way, neither Rick nor the viewer will ever know the truth.

Normally, Rick and Morty might license a famous track for big scenes like this, which is what happened in the Season 2 finale “The Wedding Squanchers.” While Rick sacrifices himself to the Galactic Federation to save his family, “Hurt” by Nine Inch Nails plays, and the devastating cliffhanger is made that much more emotional.

When series co-creator Dan Harmon first heard “Don’t Look Back,” he thought Elder had licensed a popular song he'd just never heard before, but it was actually written and recorded in just a few days as part of a collaboration with Culjak.

First, Elder laid down a track with the “piano, a guitar pad, and that repeating synthy pulse that you hear.” He also developed a rough melody idea before handing it off to Culjak to write and perform the lyrics. She played around with the order of the chords and layered different sounds to infuse the song “with a little ear candy here and there.” Martin Cooke, who has worked on newer Death Cab For Cutie albums, mixed the final version of the track.

“Ryan gave me an early version of the scene and explained plot-wise what was going on so I could figure out emotionally where we were,” Culjak tells Inverse. “Lyrically, we talked about not being super literal about what was happening in the show, but pulling the bigger emotions out of the scene.”

On Genius.com, Rick and Morty fans analyzed those lyrics to show why “Don’t Look Back” is the perfect track for Rick and Morty, but also a song anyone can relate to.

“I know you tried your best, and now is time to put this all to rest,” the song begins. Most fans interpret this as Beth speaking directly to Rick, who continues to be a toxic figure within her family years after he abandoned Beth and her mother.

“The core of it is finding Beth some solace,” the episode’s writer, Anne Lane, said in an Inside the Episode video. “I think the only solace she can find is there’s none, and being okay with that.”

For a deeper look at the grim themes from this episode, check out this "Inside the Episode" mini-doc.

“Don’t Look Back” can apply to a variety of situations, but it does perfectly capture Beth’s emotions in a story like this.

“Don't look back / Nothin' left to see / Just leave the shadows in the past,” the chorus goes, implying a longing to move on and rebuild a better future. Towards the end of the chorus, the line “Tomorrow's one day that I'm never getting back” sticks out as vaguely sci-fi.

“Time is passing so quickly, and we can’t go backward,” Culjak says of the line, noting that it was her husband who came up with it on a whim. “Appreciating our moments and trying not to think about our existence too much, because it can get hard. Otherwise, you can enter a downward spiral.”

That’s been true for Rick Sanchez for years. Despite his godly control over the universe through science, there are some things that not even he can change. His mournful regret, often masked by his manic alcoholism, is something the show grapples with at least once per season.

“That’s an emotional story beat we go to with some regularity because that’s who Rick is: A very broken person who is perfect in every way but also imperfect in every way,” Elder says. “These moments show Rick being really introspective and going, ‘I always pretend like I got everything under control, but I really don’t.’”

Adult animated shows like Rick and Morty often explore these types of deeply flawed characters who experience moments of spiritual crisis. At the end of one Season 2 episode, the atmospheric and emotional Chaos Chaos song “Do You Feel It?” plays during Rick’s botched suicide attempt. Then, early in Season 4, when Rick is devastated by the death of a new buddy, Elder’s mournful “Losing a Friend” plays. Despite Rick’s best efforts to control the universe, trauma sends him spiraling into despair time and time again.

“I wanted this to be the next step in that line of storytelling,” Elder says.

So if Rick is finally reckoning with his mistakes in a sober way, does that mean he might try to be a better person in Season 5? Maybe.