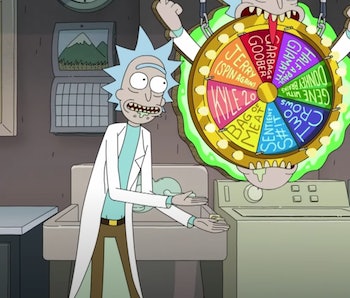 Rick and Morty going on a hiatus might sound terrifying to fans used to measuring the years between seasons previously, but after Season 5, Episode 8 the series will indeed take a short break before a supersized season finale. But just when will it return?

As reported by ComicBook.com Saturday, the [swimpedia] Twitter account that tracks Adult Swim’s schedule and other details revealed that there would be no new episodes for at least two weeks following the August 9 episode. This was promptly confirmed when "Rickternal Friendshine of the Spotless Mort" finished airing and a promo ran for the one-hour season finale.

In it, Morty returns from somewhere having used Rick’s portal gun only to find that his grandpa marked how much fuel it had left. (Where did he go, we wonder?) Morty fills it with lime soda of some kind, and Rick discovers all too quickly. After getting defensive, Morty yells that Rick should just replace him with another Morty in the multiverse. Rick calls that bluff and spins his “wheel of better things than Morty.”

On it we can see:

“Who is Rick without Morty?” the voice over ominously asks. “Find out on the one-hour season finale of Rick and Morty returning September 5 at 11 p.m. on Adult Swim.” This drops several bombshells all at once. There won’t be any new episodes for about a month! And for the first-time ever, there’ll be an hour-long episode.

Plotwise, it seems like the story might involve Rick losing Morty in some fashion, almost like an It’s a Wonderful Life situation perhaps? Does this mean Rick will migrate into another reality to spite Morty and then inevitably return once he’s learned his lesson? Probably. But it would be one hell of a cliffhanger if this season ended with the core duo separated semi-permanently.

We know that this is technically a two-parter, because the episode titles were previously revealed. Episode 9 is "Forgetting Sarick Mortshall" and Episode 10 is "Rickmurai Jack." The first is a riff on Forgetting Sarah Marshall, a hilarious comedy film in which a silly man is dumped by his girlfriend and winds up on a vacation in the same place as her and her new lover while trying to get over her. And “Rickmurai Jack” is a reference to Samurai Jack, a beloved anime series in which the titular samurai is lost in a dark future and struggling to defeat an evil wizard and return home.

Therefore, it seems pretty clear that the first half of this story will indeed involve some kind of breakup between Morty and Rick, but the devastating results may leave them unwillingly separated in the back-half of the two-parter. There’s no chance we’ll see that resolved, right?

It’s about time that Rick and Morty delivered a season finale with real stakes. The last time we had a cliffhanger was the October 2015 Season 2 finale “The Wedding Squanchers” which ended with Rick in a Galactic Federation prison. How will the writers top that one? We’ll find out in September.