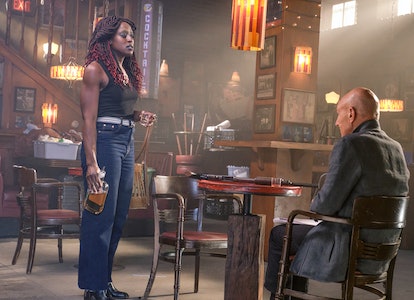 Star Trek has recast a fan favorite. In the new Picard episode, “Watcher,” Jean-Luc Picard shockingly encounters his oldest friend in 2024. But this person has no idea who he is. Longtime fans of The Next Generation might be confused by this turn of events, but luckily, showrunner Terry Matalas has the answer. Spoilers ahead.

In Picard Season 2, Episode 4, Jean-Luc beams to the coordinates Anges Jurati stole from the Borg Queen’s mind in Episode 3. And once he’s there, he finds himself in a very familiar Los Angeles bar, Ten Forward. Just like in the first episode of Season 2, Picard meets a version of Guinan; only this time, she’s several centuries younger.

The Picard team did not try to digitally de-age Whoopi Goldberg for this scene, but instead, they cast actress Ito Aghayere as the 2024 version of Guinan. Pre-existing Trek canon established Guinan as a traveling El-Aurian, an alien who slowly ages. Both The Next Generation and Picard never reveal precisely how old Guinan is, but she’s several centuries old in all iterations, including in this new 2024 version.

In “Watcher,” Jean-Luc finds Guinan packing up her bar, getting ready to leave Earth forever. She’s been hanging around on Earth for a while and easily passing for a human, which was previously seen in The Next Generation's two-parter “Time’s Arrow.” This leads to one huge question most Trekkies might have: If Guinan has lived on Earth since at least 1893, why doesn’t she recognize Picard from that TNG time travel adventure?

In “Watcher,” Guinan tells Jean-Luc, “I don’t know you, old man!” Even when Picard tells her his name toward the end of the episode, she’s familiar with his name, but she still doesn’t actually remember him.

Assuming this is the same character who lived in San Francisco in 1893 and remained on Earth after that point, you might think she should remember Jean-Luc. In “Time’s Arrow,” Picard and Guinan experienced a pre-destination paradox in which Guinan actually encouraged him to lead an away mission to make sure he was sent back in time to meet her in the first place. Picard then went back in time and hung out with Data, Guinan, and Mark Twain (Jerry Hardin).

But now because the future timeline of Starfleet has been wiped-out, none of that happened. Inverse reached out to Picard co-showrunner Terry Matalas, who explained it like this:

“This Guinan wouldn't remember Picard because in this alternate timeline, the TNG episode "Time's Arrow" never happened. Because there was no Federation, those events did not play out the same. No previous relationship exists. However, she still was likely traveling to Earth and, as we know, she hung around a bit. So this Guinan is different. But she, of course, can sense something is off. She's going through a kind of time-sickness thanks to Q's meddling with the timeline.”

Matalas didn’t hint at any more of what Q is doing to the timeline. But, like in “Yesterday’s Enterprise,” Guinan feels some kind of alteration to the timeline, even though she doesn’t express it the same way she did in TNG. This time, Jean-Luc confronts her with something she said to him in an alternate future, which makes her become disoriented and nauseous.

Throughout TNG and the film Generations, El-Aurians have had a unique relationship with time perception, making them kind of the Trek equivalent of Time Lords from Doctor Who. That said, we never really have known the extent of Guinan’s powers.

With a younger Guinan back in the mix, it’s possible some of the oldest questions we’ve had about the enigmatic bartender could be finally answered. Then again, in some ways, this version of the character is entirely new.