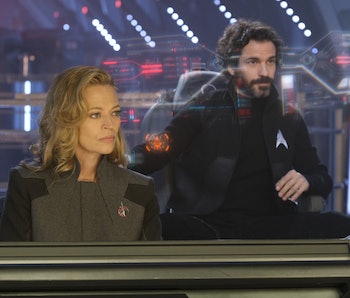 Star Trek just got really meta. In Star Trek: Picard Season 2 Episode 3, one hilarious Easter egg might break the entire canon. Or it could perfectly explain everything. Here’s why a very specific shoutout to Rick and Morty is not only perfect, but also creates a rip in the space-time continuum that might make your brain hurt. Spoilers ahead.

Toward the end of “Assimilation,” Rios (Santiago Cabrera) finds himself in a hospital. Because of a transporter malfunction, Rios didn’t beam onto solid ground, but instead appears in mid-air before hitting the ground hard. After passing out, he’s picked up by a non-profit doctor name Teresa (Sol Rodriguez), who we later learn is also a single mother. While trying to get her son to do as he’s told, Teresa threatens her son by saying, “or no Rick and Morty!”

This means that Teresa’s son, a character in the year 2024 in the Trek timeline, watches some version of Rick and Morty. This is dizzying for several reasons.

Ricky and Morty and Lower Decks

One writer for Rick and Morty, Mike McMahan, is also the creator and showrunner of the animated series Star Trek: Lower Decks, which canonically occurs in the decade (2380s) before the first season of Picard. But before getting hired by CBS/Paramount to do Lower Decks, much of Mike McMahan’s writing, including some of his writing on Rick and Morty, was inspired by Star Trek, especially The Next Generation.

So if Teresa’s son watches Ricky and Morty in 2024, and we assume this is pretty much the same version of Rick and Morty that exists in our universe, then that not only implies the existence of the Star Trek media franchise in the canonical Star Trek timeline, but it also implies the existence of The Next Generation specifically. McMahan was influenced by The Next Generation, which surely shaped his career as a writer for Rick and Morty.

The point is, Rick and Morty getting name-checked in Trek canon seems to imply some version of various Trek shows exist within Trek canon itself. But how?

The Ouroboros of Star Trek

Oddly, this has happened before. In the opening credits of Enterprise, we see NASA’s space shuttle Enterprise, which wouldn’t have been named that if Star Trek fans hadn’t mounted a letter-writing campaign. So, the Enterprise series already suggested that some form of Trekkies exist within the actual timeline of Star Trek itself.

Mike McMahan has noted that “people in Star Trek watch Star Trek,” which mostly manifests itself in holographic programs running simulations of old missions. The (non-canon) Gene Roddenberry 1980 novelization of Star Trek: The Motion Picture also suggests that some kind of 23rd-century entertainment industry exists, and the adventures of Kirk and the Enterprise had been dramatized for mass media consumption.

But the idea of a future-tense dramatized version of Star Trek existing among Starfleet folks is one thing. The notion that a TV show called “Star Trek” can exist within the culture of Earth that eventually results in the literal Star Trek future is bonkers. It would be like if Daniel Craig’s James Bond read Ian Fleming novels in his films, or if Robert Pattinson’s Batman was a fan of the Adam West TV show as a kid. The whole paradox suggests that Star Trek’s future can’t exist without a fictional version of Star Trek happening first.

So, for the rest of Picard Season 2, keep an eye out for what people are watching on TV in 2024. It may give you a hint at future seasons of Rick and Morty, or even future Trek seasons. What’s next, someone in Picard Season 2 watching Picard Season 3?

More like this
Culture
Jan. 25, 2023
30 years later, Star Trek is about to pay off a massive villain comeback
By Ryan Britt
Culture
Jan. 18, 2023
Your science fiction education begins with Babylon 5
By Ryan Britt
Entertainment
Jan. 25, 2023
Rick and Morty can survive without Justin Roiland
By Dais Johnston
LEARN SOMETHING NEW EVERY DAY.
Related Tags
Share: