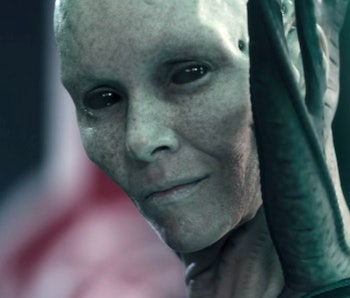 Resistance is futile. Or, in the case of the new Borg Queen in at least one timeline of Star Trek: Picard Season 2, resistance is optional.

In the second episode of Season 2, “Penance,” we meet a very different Borg Queen than we’ve ever seen before, and possibly a different one than we met in the first episode. Ahead of the next Borg revelation in Picard, Inverse caught up with the new Queen, Annie Wersching, to get a sense of how her take on the character is brand new.

The first thing to know about Annie Wersching’s Borg Queen is that she’s a different version of the character than the Queen we met in First Contact or Voyager. After Jean-Luc and his allies find themselves in an altered version of their own timeline, the Borg Queen they encounter is imprisoned and scheduled for public execution by the brutal Confederation of Earth.

“We’ve never really seen a Queen not completely in control, ” Wersching says. “She starts in such a strange place of distress. There’s silence in her head and it's maddening. There’s no hive. No Collective. She’s like ‘What the hell is going on?’”

Viewers might have a similar question. In the Season 2 debut of Picard, we met a strange black-robbed Borg Queen with tentacles and a face shrouded by a mechanized hood. We don’t know if that Queen is also played by Wersching, but Dr. Jurati (Alison Pill) makes a point of saying that the Queen’s outfit is “new.” So in Episode 2, when Wersching’s Queen is introduced, Jurati describes her as “more typical,” because she superficially resembles the Queens we’ve met before in First Contact (Alice Krige) and Voyager (Susanna Thompson).

“Of course, after I was cast, I re-watched all the Borg episodes. A lot of TNG. A lot of Voyager,” Wersching says. “I watched First Contact. But I didn't necessarily watch it all over and over and try to mimic either Susanna or Alice. I just wanted to see what they did, take it in, and then have my own take on it.”

Picard’s “Penance” addresses the question of various Borg Queens more directly than any Trek episode before. Seven (Jeri Ryan) and Jurati refer to them as a type of Borg leader, rather than just one person. This is echoed in how Wersching talks about the role too.

Canonically, there have now been different Borg Queens. In this new timeline, the Queen could have begun her life as a different person. And because Wersching was in an episode of Star Trek before, things nearly got very complicated. In the 2002 Enterprise episode “Oasis” she played Liana, a character unwittingly raised by holograms created by her father Ezral, played by the legendary René Auberjonois. To Inverse, she reveals that she and producer Akiva Goldsman briefly considered connecting that continuity.

“Akiva said ‘We could make it that she’s actually Liana, and maybe she actually had been assimilated,’” Wersching says. “We thought about making this whole connection. Obviously, we didn’t go there. But Akiva said, ‘It’s the Star Trek world. We can make anything work.’”

For Wersching, appearing in Picard has brought her acting career full circle. 20 years ago, her brief appearance on Enterprise was her “first television job ever.” Now, just like the Borg Queen, Wersching’s Star Trek experience spans generations. “I was a theater kid before that. I kept asking Scott Bakula and Connor Trinneer to help me if I was doing anything too big. Star Trek was my first big learning experience.”

Wersching teases that there are even bigger surprises coming in Picard Season 2. Specifically, she mentions that her connection with Picard regular Agnes Jurati will play out differently, and more surprisingly, than any other Borg-human relationship before.

“We’ve never seen a Queen obsessed with someone like this before,” Wersching says. “Yes, they’ve been obsessed with Locutus or Seven of Nine. But there’s something about Jurati that is fascinating to the Queen. With most of the humans, [the Queen] is annoyed. But with Jurati, she’s like ‘Wait a minute. maybe I can use you.’ It’s a really weird and interesting relationship that they turn to. I can’t wait for people to see it unfold.”

More like this
Culture
Jan. 25, 2023
30 years later, Star Trek is about to pay off a massive villain comeback
By Ryan Britt
Culture
Jan. 18, 2023
Your science fiction education begins with Babylon 5
By Ryan Britt
Entertainment
Jan. 13, 2023
Foundation Season 2 could fix the worst thing about the Isaac Asimov books
By Ryan Britt
LEARN SOMETHING NEW EVERY DAY.
Related Tags
Share: