"I was every kind of nerd. I was a school nerd, choir nerd, fantasy nerd." 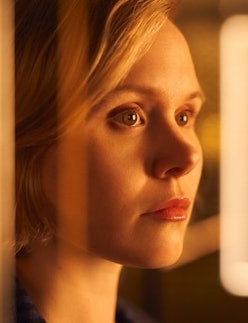 Alison Pill can't wait to sing it out.

The Toronto native has already starred in two of the most talked-about shows of 2020 so far. She played the self-deprecating android expert Dr. Agnes Jurati on Star Trek: Picard, and followed it up with a riveting turn as quantum physicist Katie in Alex Garland's galaxy-brain limited series Devs. After a busy start to the year, she's stuck at home like the rest of us, but itching to get back on the mic once we're all out of lockdown.

“I do karaoke like it's my religion. My best friend and I will make an afternoon of it," Pill told Inverse. "This is not like a drunken endeavor. This is like therapy.”

I was every kind of nerd. I was a school nerd, choir nerd, fantasy nerd. I missed a lot of social cues that other people more popular than I understood. I was really confounded by why the things that I thought were cool weren't actually cool.

There was a talent show at my school, and I decided to do the song “Out Tonight” from Rent, which is like a really sexual, odd choice for a virginal musical theater nerd. But I legitimately was like, “I'm going to be the coolest kid in school.” Turns out it was just sort of weird and awkward to sing an a capella version of Mimi Rodriguez.

There's these huge levels of blindness at 15, but once you get older you see the world is a much bigger place and it kind of doesn't matter. You can find like-minded people, who think “Out Tonight” a capella is fucking badass.

There's not even a question. I was Coldplay obsessed. I wrote a fan-fiction of how Guy Berryman and I would eventually get married.

I kind of got a jump on a lot of their American audience because my sister read NME. When I was 13, she put the song “Yellow” onto a mix she made for me and yellow is my favorite color. So I was like, "these guys wrote this song for me." From then on, I was just pretty much hooked. When Parachutes came out in the U.K., there was a moment in time where they weren't playing huge amphitheaters, and I caught them at that moment, where I could feel like an early enough adopter, so their success became like my success.

I remember chat rooms, before it was creepy. I mean, it was probably always creepy, but before we really knew how creepy. I would sit at my dad's computer, because his was the one hooked up to the internet, and just chat with strangers. I took them at face value because I was, you know, an idiot. We were all kind of idiots then.

I was like, “Hi, I'm 14. I live in Toronto and it's pretty cool. These are my favorite books.” I didn't go to a depraved place automatically. If only more people were like me, the internet would be a cool spot.

That my great, true love was Guy Berryman, the bassist from Coldplay. So he's Scottish – obviously, you know that. [Editor's note: I did not.] Anyway, in my story, my friend was going to be married to Chris Martin. Guy and I wouldn't have met yet. Having flown to London in a state of dismay at the state of the world and the state of my relationships, I would meet Guy through Chris and my friend, and then we would fall in love. We would sit in front of a fire, staying up all night, talking, drinking red wine.

Maybe that is the truth that I've kept all these years. Like, one day you'll meet somebody at the right place in time and then you'll both be in the right place to say like, “maybe we should procreate or cohabitate,” and that'll be it. A lot of it is happenstance, so the idea of a soulmate was deeply disturbing because you could miss that person. But that's not really true: you can grow in incredibly different ways, near-infinite different ways. There's not one way that your life will go based on one person.

What high-school teacher did you like the most, and why?

Doug, my science teacher, is still with me a lot. Especially when I’m in New York, because he explained the way you draw electrons by calling it the “subway pervert rule.” You put one on each side of the quadrants before putting them next to each other, because nobody gets on an empty train and sits next to a person, since then you're a subway pervert.

I was so lucky to have teachers in high school that challenged me. Dirk was incredible. He’s a very avid socialist, and did this Comparative Literature thing looking at George Orwell's and Anais Nin’s essays about Morocco. Fucking awesome.

What was your first professional big break, and why?

Pieces of April (2003). Peter Hedges wrote and directed this movie. It was with Katie Holmes, Patty Clarkson, and Oliver Platt. The dudes in my class were losing their minds because it was Katie Holmes from Dawson's Creek. Yeah. And we had free Krispy Kremes on set. I’d never had them before and those are... [thoughtful pause] those are delicious.

It was the first time that I got a visa to work in the U.S., which was a big stepping stone to getting a green card. One of the unfortunate realities was that you could basically only get hired in Canada for small roles. You needed to get hired in the U.S. in order to do bigger roles that would then shoot in Canada.

What was your first professional failure, and why?

There's this movie I did called Perfect Pie (2002). Everybody in it did a great job. Me and Rachel McAdams had all of our scenes together, and she was just so good. So I really wanted this part, but I didn't go far enough. I wasn't as good as I wanted to be, and there were a few different reasons why that happened. Some of that was look-based, like I should have been greasier-looking, but I got caught up in the vanity stuff. Like, look at my pretty hair. When the whole thing is that [the character] smells.

After I saw it, I learned a lot about my own power to make decisions, but it also had a lot to do with being young in an adult world. I remember watching Rachel and thinking “Oh, she's much better at this than I am.” It was a big learning experience, and I walked away from it thinking, “it really hurts that I didn't nail this part that I really wanted to nail, but that's okay. Because I'm gonna learn from that.” And I did.

Every bit of entertainment is gonna last for a year, but only be available like in seven-second increments. Or it's just going to be people lip-syncing to jibberish. Even less than Tik Tok. It's gonna be entirely pointless and educate no one. Also, flying cars.

She'd be pretty psyched, maybe weirded out about Picard. But I think we would both agree that working on a pretend spaceship is awesome. My 15-year-old self would be like, “You worked with the guy that wrote The Beach?!” Because I still felt like that when I met Alex [Garland].

She’d definitely be horrified that I live in L.A. That would be really hard for her to hear. All the hiking and juice, y’know?