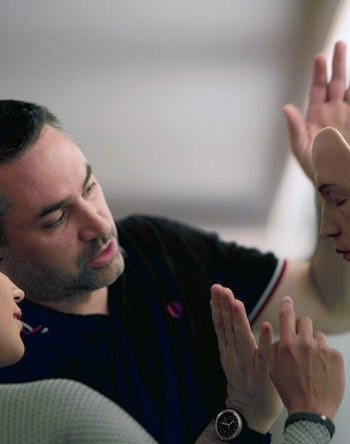 As the cinematic genius behind Annihilation and Ex Machina, plenty of sci-fi fans have wondered why Alex Garland is leaving movies for television. With Devs, Garland is bringing his talents to the streaming wars, and back in 2019 at the show’s New York Comic-Con panel, he blamed the change on his frustrations with the film distribution process.

However, when we posed the same question to Garland at the 2020 Television Critics Association 2020 winter tour in January, he was more interested in talking about why TV is exciting, rather than what’s wrong with making movies. The Devs showrunner says he was inspired by television's "great adult dramas," specifically: The Sopranos.

"There was a period in like the 1980s, where television was a very different animal than it is now," Garland tells Inverse. "I grew up watching things like Starsky and Hutch and, you know, The Six Million Dollar Man, and these were production line, sort of projects. They were poured out."

He isn't wrong. Just a few decades ago, TV was a dumping ground for low-stakes episodic entertainment. It was a place where the tried-and-true hero and villain archetypes played out on a weekly basis, and they always stayed in their lanes.

For Garland, the series that altered his perspective of television entertainment came in the form of the Steve Bochco-created police drama, Hill Street Blues.

"You suddenly thought, Hang on, I've not seen this before!" Garland says. "And it continued to evolve and then suddenly, The Sopranos just changed the landscape, fully."

“Since The Sopranos, it just feels like an adult drama's natural home is television.”

When The Sopranos first hit HBO, there was nothing like it on television. The violence, the colorful language, and the narrative flip-of-the-script that put a stereotypical mafia villain in the role of a sympathetic anti-hero all broke ground on the medium. The show received 16 Emmy nominations after its first season aired, which was simply unheard of, especially for a cable television series. It also garnered the then-relatively-unknown actor James Gandolfini his first Emmy nomination in 1999 — a huge feat given the fact that no actor on a cable program had ever been nominated for the award before that.

The David Chase-created series not only changed HBO's programming methodology — before the mafia-themed series premiered, the cable channel's main focus was airing boxing events and syndicated movies — the show put cable television on the map and altered how episodic entertainment worked on the small screen ever since.

21 years later, Garland's Devs — a series that explores the theory of determinism, which, he explains as, "basically, nothing happens that isn't the result of a prior cause" — is sure to disrupt the television formula yet again.

"Since The Sopranos, it just feels like an adult drama's natural home is television," Garland says. "Films out this year, last year, the previous year — there is some really great adult drama, but television has become a more natural home."

At its heart, determinism basically cancels out free will since everything that happens is decided by the events that preceded it, including our own decisions and morals. So, if determinism does indeed hold true, then Devs wouldn't at all exist if The Sopranos never aired, right?

Without skipping a beat, Garland smiles and waves his finger, proud, in a real teacher-student bonding moment.

"You could certainly say that," he says. "And it's true. That would be true."