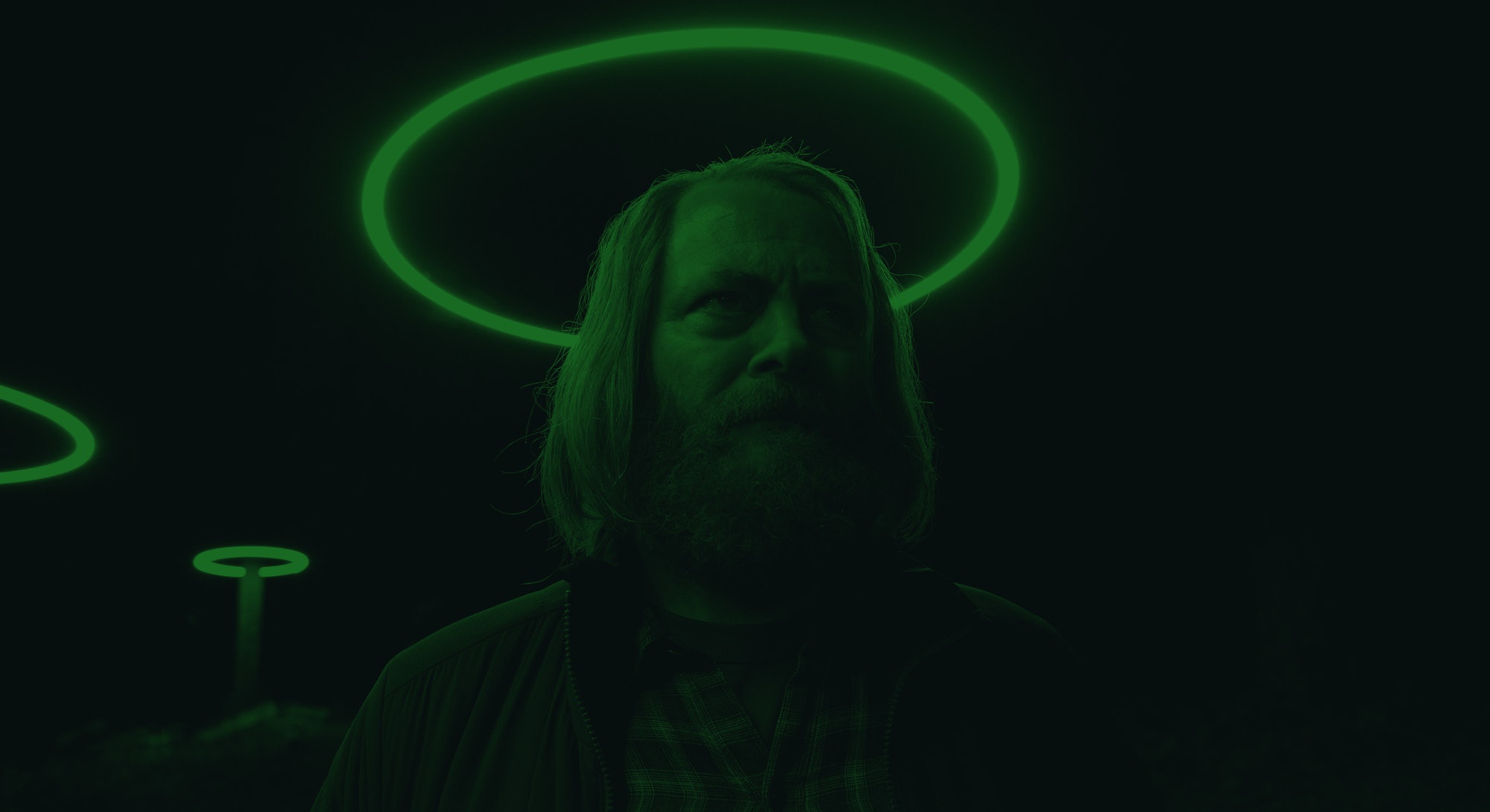 Nick Offerman is a renaissance man. You can see it in his eyes. With the slightest tick, his face shifts from laugh-out-loud funny to a depressing kick to the gut, and while he may still be best known as Ron Swanson, that’s just the tip of the Offerman iceberg. There’s depth in those eyes, and maybe even something a little disturbing.

The actor, skilled carpenter, noted author, and performer of one-man stage shows is about to show the world just how far from Ron Swanson he can go. His next big role in the upcoming mind-bending sci-fi drama Devs is about as distant from the gruff-but-lovable director of the Parks and Recreation department of Pawnee, Indiana as possible.

And that’s no accident. Offerman tells Inverse he took his time before picking his first big post-Parks and Rec TV role, but when Alex Garland (Ex-Machina and Annihilation) came knocking, Offerman didn’t hesitate for a second.

“That guy's brain is so astonishing,” Offerman says of Garland, adding, “He's like, the closest thing we have to Kubrick.”

An eight-episode drama from FX on Hulu, Devs comes from Alex Garland, the visionary writer-director behind ground-breaking films Ex-Machina and Annihilation. The plot centers on a software developer named Lily Chan (Sonoya Mizuno) who’s dealt a sudden loss that prompts her to investigate Amaya, the tech company she works for. Chan soon discovers that her employer isn't as progressive as she once thought, and Offerman's Forest, the puzzling CEO, eventually becomes her prime suspect.

Forest is the polar opposite of Ron Swanson. Appearance aside — longer blond locks and an unkempt beard give Forest a middle-aged tech hippie look — the Silicon Valley mogul is brooding, haunted, and technologically savvy. (The only thing Ron Swanson hated more than technology was showing emotion.)

For the sake of avoiding spoilers, we're side-stepping the bigger themes of the series, which delves into heady ideas like quantum mechanics and determinism (more on that in a future article). But, take our word for it: Devs will get people talking. Offerman, who has taken on a bevvy of unique projects and roles since his hit NBC series ended, is over-the-moon about the project and the opportunity to work with Alex Garland.

Inverse sat down with Nick Offerman to dig into his struggles with the entertainment industry, what drew him to the role, and the wonderful experience working with Garland.

Audiences have never seen you in a role like this before. Tell me about what drew you to Devs.

Well, gosh. I am very grateful for the organic direction of my life. For many years, I didn't get cast very well or at all. And so that difficulty, or that sort of perceived failure as an actor, allowed me to — required me to — become a skilled carpenter and a wood-worker. But also, it left me time to do things like read books or be in nature. So that then all of those things became avenues in which I've been able to make things outside of my initial career.

This is something you talk about in your book, Paddle Your Own Canoe. Having something you're passionate about outside of the industry is a helpful insight.

I wish somebody would've told me that early on because it's one thing to hear it, but it takes some doing. It's antithetical to what we're taught about show business and what you're supposed to focus on as an actor. But the people that are giving you that messaging are usually making money from you being obsessed with showbiz. So it's sort of self-defeating and if you can just build a life outside of it so that when you walk into it, you're self-possessed, then you're on the right track.

But acting was always the number one priority, right?

Yeah, you know, I went to theater school. I never set out to become anything but an actor. I wanted to move people with my interpretation of scripts. I remember in school as a kid, an English teacher once told me that I had a knack for reading comprehension. I must have been reading out loud. And I remember this compliment moving me where she said something like, "You're good at getting across what the author wanted us to take from this writing." And so in the years that followed, you know, especially since Parks and Recreation, I'm now able to pick the scripts.

And how did you come across Devs? Did the script come to you?

A lot of the business is not banging my door down. I don't hear much from the film studios, in general. But enough of the offers I do get are interesting and legitimate that I have a choice of things I can do. That allows me to pick my jobs based on the quality of the writing. And not just the quality, because I pass on a lot of really good writing that I just don't feel inspired by. I'll get offered, you know, a network sitcom set in a school, let's say. And it's like, this is a perfectly great job! But I just don't feel like I'm doing anybody any good if I do this. So no, thank you. Let somebody else do it who may do them more good.

“I had a feeling that I hadn't had for many years, of butterflies, of like, Oh my God!”

In hindsight, it became clear that I was creating daylight in my schedule. Because then suddenly, I got an email that said, "Alex Garland wants to meet you." And I had a feeling that I hadn't had for many years, of butterflies, of like, "Oh my God!" To me, he's like, the closest thing we have to Kubrick. I mean, just based on Ex-Machina and Annihilation, primarily. Because those are, despite his vast amount of work in film and in writing novels, the only two films that are entirely his creations.

He's made a huge impact in the film world and now Alex Garland has decided to bring his artistry to television. Which is super exciting.

Yeah. And beyond that, he wrote all eight episodes by himself months before production even started! Which is just unheard of in this business. So, to be handed the whole show… I mean, basically, when I hear that someone of Alex's ilk wants to work with me, I'm going to be hard-pressed not to want to do the job, whatever it is. Even before I read it. But then I read it! And this part is just incredible. Yet, it's part of an ensemble. It's just this incredible piece of writing and creative work. Without being too immodest, so much of the work is done for us by this incredible novelist who also is a filmmaker.

That guy's brain is so astonishing and to be sitting on a TCA panel stage and hearing him be my show creator, it makes me want to cry. I'm just like … I can't believe I got this job.