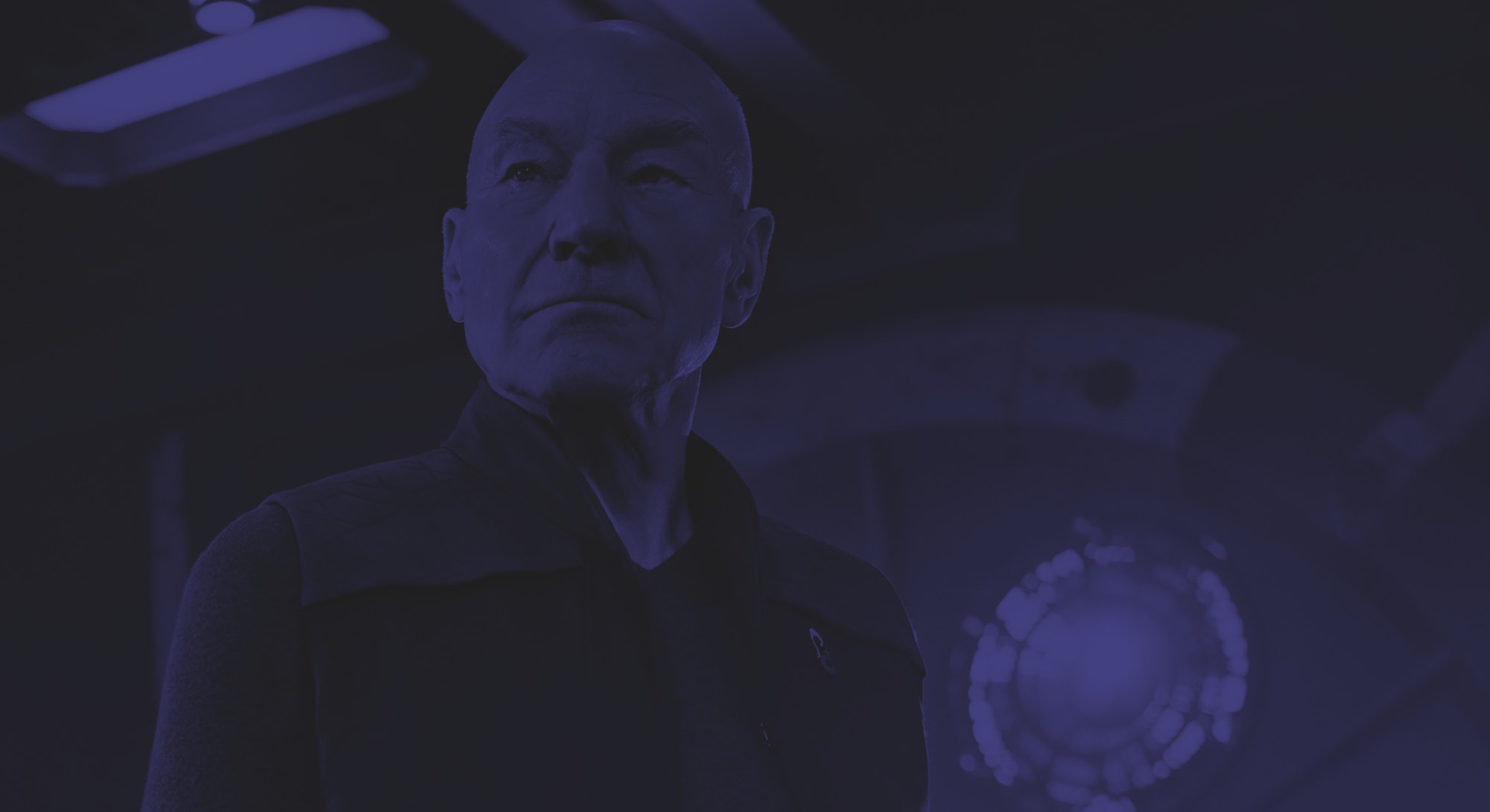 Jean-Luc Picard is getting up there, y'know.

In the premiere of Picard, "Remembrance," a frantic dashing up several flights of stairs leaves the once-spry Starfleet officer winded. He ducks for cover near a bench, letting his decidedly more agile companion, Dahj, handle the phasers and martial arts. In the second episode, a patronizing whippersnapper at HQ tells the retiree, "It's good to see you up and around again," prompting a scowl that might once have been reserved for Jean-Luc's banter-loving adversary, Q.

Picard doesn't shy away from its protagonist's age. Instead, it acknowledges the limitations that come with it and embraces this new phase of life as an opportunity to tell a different kind of story. (It's worth noting that Patrick Stewart is 79, while the character he's playing is – believe it or not – in his early 90s. Jean-Luc was born in 2305, Picard takes place in 2399.)

It's an example from which that other massive spacefaring franchise could stand to learn a thing or two. Just weeks after the release of The Rise of Skywalker, the contrast between Star Trek and Star Wars' treatment of older characters couldn't be more stark.

There's no age limit on being a hero.

In Trek, getting older isn't something that characters particularly relish. The scene below, from Wrath of Khan, is a case in point. Kirk is troubled to be celebrating yet another birthday and snaps at McCoy when he gives him a pair of antique eyeglasses as a gift.

This moment captures what has long been one of the greatest strengths of Trek: The rich sense of history between its characters. Kirk and Picard don't need to be young bucks to save the galaxy, but they do need their friends at their side. Just like Kirk had Bones and Spock, Picard had Riker and Data: One who always will tell it to you straight, another who's a helluva lot smarter than you.

Getting older didn't stop Kirk from thwarting Khan, reviving his dead bestie, hitting on that braless '80s whale scientist, or ending the Cold War with the Klingons. Nor did it prevent Picard from going back in time to make sure Zefram Cochrane met the Vulcans, killing Tom Hardy, or making out with a 300-year-old lady for at least 70 minutes.

It used to be cool to rip on Trek's affinity for geezers. By the time Undiscovered Country came out in 1992, the lead actors were pretty long in the tooth, and those Starfleet uniforms had taken on a decidedly looser, paunch-friendly fit.

Personally, it's one of the things I've always loved about Star Trek. It doesn't matter if you're old, or a little doughy, or even if you've got a weird toupee. There's no age limit on being a hero.

That's not the case at all in Star Wars, where heroics and adventure are strictly reserved for the young. One of the most common gripes about the sequel trilogy is that it transformed Luke, Leia, and Han into washed-up codgers. Canonically, Luke and Leia were only 53 years old at the time of Last Jedi, though you'd be forgiven for thinking they were as ancient as Yoda. (For reference, 53 is the current age of Adam Sandler, Halle Berry, David Schwimmer, and Salma Hayek, none of whom seem to be teetering on the brink of imminent death.)

Instead, the role of Padme and Anakin's progeny in the sequels is to wistfully pass the torch to the younger generation. They are so far past their prime that it is literally impossible for two of the galaxy's most powerful Force users and real-deal heroes to do anything remotely strenuous. From a certain point of view, Luke dies from meditating really hard and Leia perishes from taking a sad-nap. What's next, a Disney+ series where Chewbacca passes away after taking a tumble in the shower?

When you add Emperor Palpatine to the mix, the Star Wars view of aging looks even more perverse. Whether you ascribe to the idea that Sheev's face got melted during his Revenge of the Sith duel with Mace Windu or that their showdown revealed his true visage, the fact remains that the embodiment of evil throughout this decade-spanning saga is essentially a gross old fart who refuses to die. That's a huge part of what's so unnerving about the Emperor when we first glimpse him in Empire: He looks positively ancient. It's also why he's so creepy in Rise of Skywalker where he's hooked up to loads of arcane machinery to keep his husk of a body functioning.

Only two episodes of Picard have aired so far, and we've only seen one other TNG character appear in a dream sequence. But it's already clear the show isn't going to take the sad-bastard, torch-passing approach. Just look at this picture below of Jean-Luc with Will Riker.

The context of this scene in Picard isn't clear yet, but even the screenshot tells us a lot about the emotions at play. There's no beef, shame or regret. We never really got a scene with this kind of emotional payoff in the Star Wars sequels, since all our heroes are broken and sad because Han and Leia had a goth son. Kylo Ren was a fascinating character, but couldn't he still exist in a story that also included a nice reunion scene between Luke and Han?

What we've seen of Picard so far is in keeping with Trek's tendency to push inexperienced youngsters to the wayside. Kirk's derpy son with the perm in Wrath of Khan is gone in a flash. Spock handily foils hotsy-totsy Vulcan Kim Catrall's traitorous plot in Undiscovered Country. TNG's teen dream Wesley Crusher left the show in Season 4 to trip balls on the astral plane with the Traveler, and Dahj bites it in the very first episode of Picard. Let's hear it for the coots!

In Star Trek, getting older isn't inherently depressing and awful. It's just part of life. While there's a lot that's awesome about the Star Wars sequels, it's a little bittersweet to imagine how things might have played out if Luke, Han, and Leia got the Picard treatment.