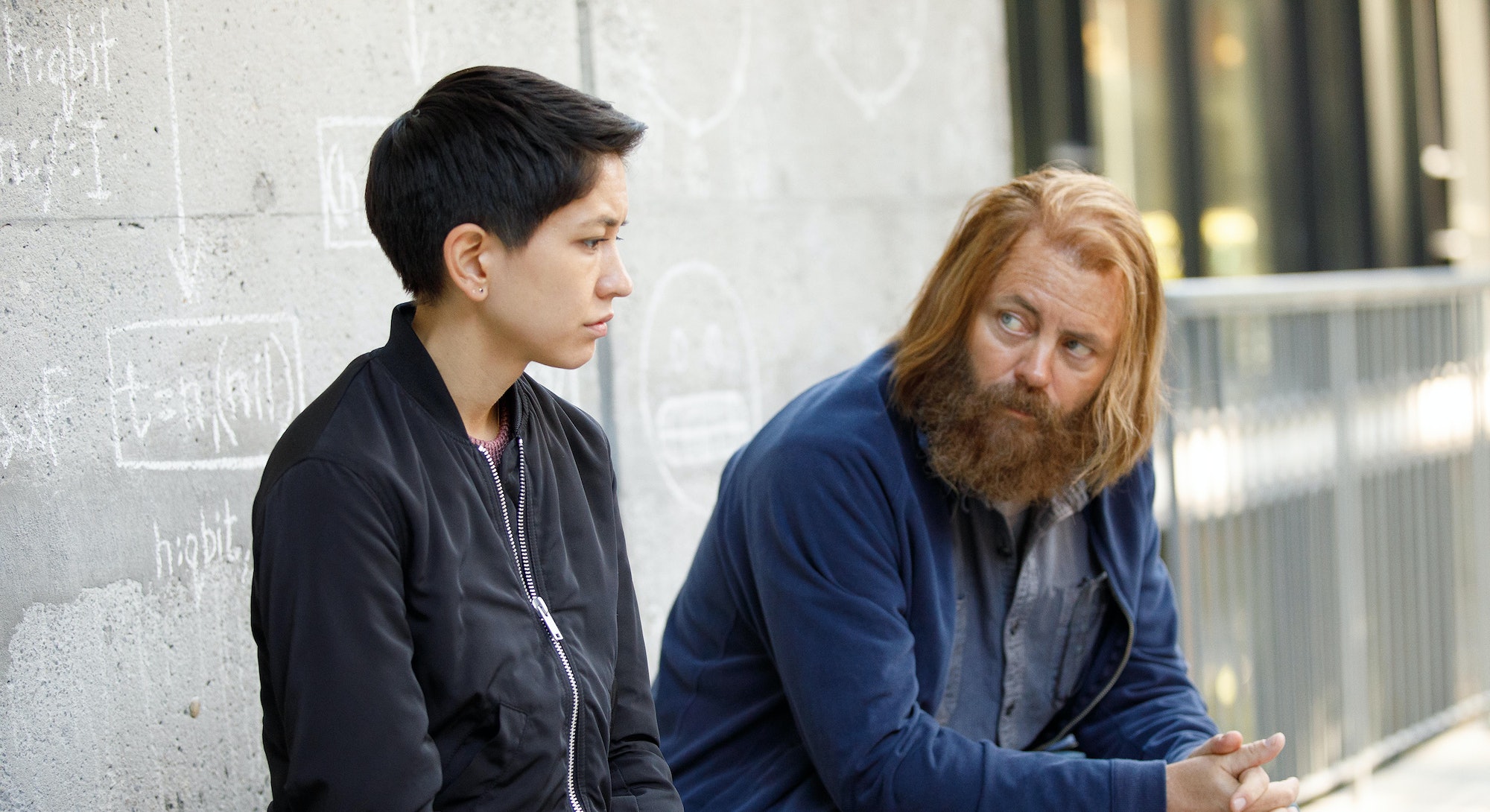 “The problem with the people who run tech companies is that they become fanatics. They think they’re messiahs.”

These words, repeated several times in the season finale of Devs, pretty much sum up the entire show. Without going into spoilers, the latest sci-fi mind bender from Alex Garland (Annihilation and Ex Machina) takes everything you loved about those movies and stretches it into an eight-episode miniseries that’s equal parts social commentary and stoner college philosophy. It’s also one of the most beautifully realized pieces of art released in 2020 so far.

Devs takes place in modern-day (or perhaps near-future) San Francisco. Homelessness is rampant, tech companies rule, and the most powerful among them is Amaya. Run by its founder and CEO Forest (Nick Offerman), Amaya is a powerful but pretty boring quantum computing tech giant with a fascinating secret: A mysterious department named Devs has a select team working on something top secret (so secret FX made us promise not to reveal any details in this review).

The plot focuses on Lily Chan (Sonoya Mizuno), a cryptocurrency developer at Amaya who becomes suspicious when her boyfriend Sergei (also an Amaya employee) gets selected to work in Devs and disappears soon afterward. Lily quickly becomes suspicious of Forest and the entire company, but as the story unravels with a mix of action, espionage, and psychological horror, it becomes clear that nothing here is as simple as good and evil or guilty and innocent.

(Again, sorry for the vagueness, but FX really wants you to go into Devs with as little info as possible, and I don’t blame them. This show is a rollercoaster of twists and turns, so the worst thing you could do is read a bunch of spoilers instead of experiencing it for yourself.)

Until Devs, the best portrayal of a 21st-century tech leader in TV or movies was probably Jesse Eisenberg’s awkward and narcissistic Mark Zuckerberg in The Social Network, or maybe Topher Grace as the cynically zen leader of a fictional social network in Black Mirror. But Nick Offerman beats them both as Forest, who’s calm demeanor hides a man with more power than the president and motivations so separate from day-to-day reality, they seem almost alien. A year ago, I would have laughed at the idea of Offerman as a serious dramatic actor. (This is Ron Swanson for crying out loud!) After Devs, though, I’m legitimately excited to see what the actor does next, and I wouldn’t be surprised if his next role puts him in reach of an Oscar.

Offerman isn’t the only actor who shines in Devs. Mizuno, who’s played smaller parts in previous Alex Garland movies, takes the leading role and runs with it. Her small stature hides a powerful heroic lead willing to confront power and corruption head-on. Lily Chan is the hero we need in the era of Facebook and Amazon.

Beyond the cast, almost every detail of Devs is perfection. The set design is unworldly, especially at the Devs department itself — a golden cube within a cube surrounded by a redwood forest. The way San Francisco shimmers with the wealth of big tech is unmistakable. Whether it’s a city street or a highway, there’s something just slightly off about this world.

The score is powerful and ominous, and when the show does opt for a popular song, it always gives that moment extra layers of meaning, whether that’s Crosby, Stills, and Nash’s hauntingly beautiful “Guinnevere” that plays over long-gone memories of domestic bliss or a fight scene punctuated by the spooky slow-core ballad “Congregation” by Low. I don’t know if Garland is picking these songs himself, but whoever did has serious range.

Garland has said before that the inspiration for Devs was the concept of determinism — the idea that everything is preordained by the events that came before it and choice is an illusion. If a TV show about heady philosophical concepts like that sounds good to you, then you definitely won’t be disappointed. And even if that sounds boring, you’ll still probably love this show.

Devs takes nebulous concepts like determinism and the multiverse and grounds them in reality by connecting them with life and death stakes. It’s enough to make you want to enroll in a philosophy class, or at least read a few Wikipedia pages.

Devs combines all these elements to create something powerful. It’s the best example since Twin Peaks of what happens when a great director moves from movies to TV and embraces the medium for all its worth. With more room to breath, Alex Garland gives us his most interesting characters and world yet.

Is it perfect? Not quite. Like Annihilation or Ex Machina, Devs can feel slow and impenetrable at times, but by now, Garland has earned our trust. If you see this show through to the end, you’ll be happy you did.