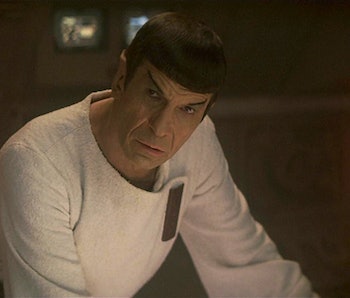 Thrusters at Spock’s command! In Star Trek IV: The Voyage Home, the classic Enterprise crew traveled back in time by using a gravitational slingshot around the sun. The calculations to get them where they needed to go were done on the fly — by Spock himself. Now, in Star Trek: Picard Season 2, the nature of Spock’s time travel skills have not only been clarified but recent Trek canon gives it another wrinkle too.

After awakening in a topsy-turvy alternate future, Jean-Luc Picard and the wayward crew of the La Sirena learn from the Borg Queen that the timeline has been altered in the year 2024. In this future, no formal means of time travel exists, so Jean-Luc suggests they do it the old-fashioned way by taking a high-warp trip around the sun.

“There are cruder methods of time travel,” Picard says. “A star’s gravitational pull, a slingshot maneuver at warp to generate a temporal fissure... Kirk’s Enterprise did it on more than one occasion.”

Although Picard knows Kirk because of a different kind of time travel, he is generalizing a bit here. Kirk and the crew of the USS Enterprise NCC-1701 did this type of time travel twice in The Original Series, once on accident, once on purpose, and once off-screen to get them to the 20th century in “Assignment: Earth.” But much more famously, Kirk and the Enterprise crew used the slingshot effect to time travel in a ship that wasn’t the Enterprise (a stolen Klingon Bird-of-Prey nicknamed “the HMS Bounty”) in the film Star Trek IV: The Voyage Home.

Dr. Jurati adds the reason this was all possible was that “they had Spock,” and what was special about Spock vis-à-vis time travel was “an intelligence that can isolate the divergence and micro-shift for any chronitonic radiation.” Although this is arguably what Spock was doing when he was making calculations in The Voyage Home, there’s another small retcon here: Chronitonic radiation was introduced into the Trek canon in First Contact, and it applied to Borg time travel. In essence, with one line, Jurati is retroactively connecting how Spock calculated time warp with a Borg method used at a later time.

Seven then equates Spock’s time warp smarts with the Borg Queen, who will now serve in the role of time travel expert for this time travel mission.

No other main character in Star Trek has time-traveled more than Spock. In fact, Spock’s childhood is wrapped-up in time travel in two ways. In The Animated Series episode, “Yesteryear,” Spock saved his own life as a child via time travel. As established in Discovery Season 2, Spock was visited by the time traveler known as “the Red Angel,” later revealed to be Gabrielle Burnham, at another point in his childhood. Later, in 2257, Spock mind-melded with the Red Angel, which caused his temporal perception to become unhinged from the normal linear flow of time. Spock was later stabilized with the help of the Talosians, but this Discovery retcon could go a long way to explaining Spock’s time-travel computations as described by Dr. Jurati in Picard.

In other words, Spock is, of course, a super-smart person. But just by virtue of being a Vulcan and loving math, those traits alone don’t explain why he was able to do time travel computations in his head. Even in The Voyage Home, Spock admits to Kirk and Bones that he’ll have to “guess” as to the exact computations to get the crew back to their correct timeline.

What this one very brief scene in Picard seems to establish is that Spock did have some kind of innate ability to perceive time differently than others. And without that low-key superpower, Kirk’s crew — without or without their Enterprise — wouldn’t have been able to save the world.