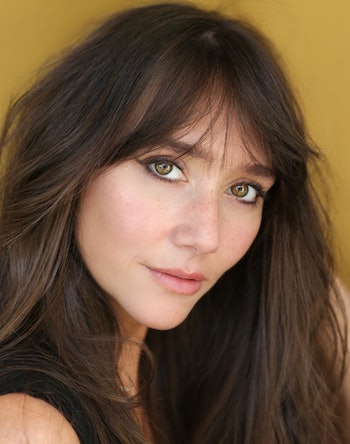 In a cameo-of-the-week sitcom, it can be hard for any one guest to stand out — especially when most of those cameos are pre-existing superheroes with passionate fans.

So it came as a surprise when the most popular character on Marvel’s She-Hulk wasn’t Daredevil, The Abomination, or even Mr. Immortal. Instead, it was a loud woman from Fort Lauderdale whose only power is a weird way of spelling her name.

Played by Patty Guggenheim, Madisynn King earned her place in the MCU with her first line of dialogue. When a sleazy magician asks for her name, she replies, “Madisynn, with two N’s, one Y, but it’s not where you think.”

The rest was history, and by the end of the episode, Madisynn was best friends with the Sorcerer Supreme, whom she affectionally refers to as “Wongers.”

“It was funny when I first said that during the rehearsal,” Guggenheim recalls when asked about the nickname’s origins. “He was like blushing. It was so cute.”

Speaking to Inverse as part of our Scene Stealers end-of-year series, Guggenheim shares the story of how she got the role, how Madisynn went viral, and what comes next.

How was the character first described to you?

[Director Kat Coiro] basically said: “This is a party girl. She’s just a tipsy party girl who’s having so much fun.” I think she knew I could get into that pretty quickly because I had worked with her on a project where I play a similar-ish character. I knew very little about the world, what I would be doing, or who I would be working with. But I was just excited that she thought of me.

How different or similar would you say you are to the character?

Honestly, it depends on what day. I’ve probably been more Madisynn at different times in my life. I would say I’ve kind of grown out of... no, no, I wouldn’t. I would say it depends on the day. You know how you can kind of turn the dial to be like a few degrees of yourself in a different direction depending on your surroundings? I could probably I can turn up to Madisynn after a few cocktails pretty easy.

Was there a lot of secrecy around the show and your character?

I knew it was for She-Hulk, but that is pretty much it. I knew a little bit of the premise and I knew I was going to be working with a magician as part of a magic act that went wrong.

They used a really funny name for the character who ended up being Wong. It was like Jacoby or something, and I was like, “Who’s Jacoby?” I was googling everything until I realized they just made it up. I couldn’t really put the pieces together.

You and Wong are so great together. Whose idea was it for you to call him Wongers?

That was in the script. That was Melissa Hunter or Jessica Gao, probably. I think they worked that out in the writers room. I don’t know if it was Jessica or Melissa, but they are both extremely brilliant, hilarious minds. Melissa wrote this script and did a really great job of putting a lot of stuff in there.

Even just Madisynn spelling her name. That is such a great specific for a character and such a helpful thing for an actor who gets a script. You’re like, “Oh, I know, I know this person. I know what this is. I know this person who puts seven I’s on ‘I think.’” So yeah, that was all written.

Wongers, I mean, it was funny when I first said that during the rehearsal. He was like blushing. It was so cute. He was like, “Oh, my gosh, people are going to love this.”

Was there anything you did that didn’t make the cut?

I do wish I could see the whole tag sequence because we went on for about 30 minutes about brunch. He just didn’t know what brunch was. So I was asking him if he knew about brunch and what you do at brunch. They didn’t need it in the show, but I would personally love to see it because sometimes when you’re like improvising like that you kind of black out at parts. I just wish I knew what I said.

When did you realize your character had gone viral?

One of my friends sent me something from Facebook that her friend from high school had posted that was like “Madisynn 2024.” It looks like a president’s logo, but it’s for a new Marvel show — whatever, somebody created this funny graphic.

And she was like, “Someone from my high school in Minnesota sent me just posted this on Facebook!”

Will Madisynn return to the MCU?

I think she could. I don’t know anything. You know, it’s Marvel. But I definitely think she has the potential to pop in. I love that she’s best friends with a sorcerer. It kind of feels like the possibilities are endless. And I really love hearing what fans come up with. That’s really fun to hear. But yeah, I hope so. It’s a total dream.

Is there anything else you’ve got coming out you can tell me about?

I have a movie out Dec. 9. It’s called The Binge 2: It's A Wonderful Binge, and it’s a really fun holiday comedy, like really wild. There are so many comedians in it. It’s just going to be like a real party. So that will be fun.