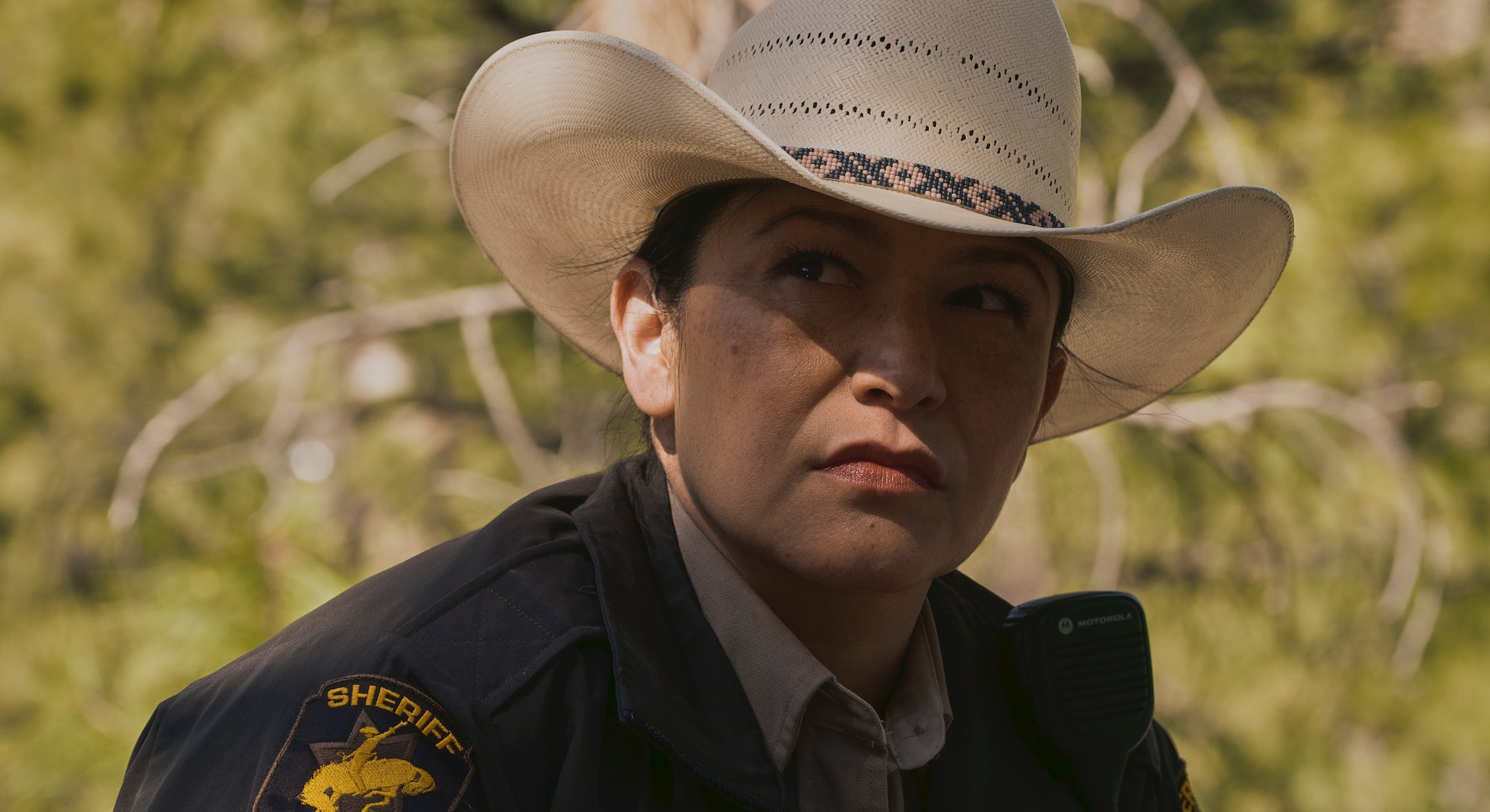 When Outer Range dropped its season finale, the time-bending series left us in a state of utter bewilderment as an avalanche of bizarro events unfolded on the Abbott ranch.

Created by Brian Watkins, Outer Range is currently one of the most original releases on Prime Video’s roster and centers around Royal Abbott (Josh Brolin) and his family as Wyoming cattle ranchers confronting the cosmic anomaly of a fathomless black hole in the middle of his west pasture while battling his aggressive neighbors over property rights. This inexplicable land feature becomes the focus of murder, mayhem, and temporal mirages that include disappearing mountains and buffalo stampedes.

At the heart of this weird vortex of time-space dilation is Deputy Sheriff Joy Hawk, a tough Native American peacekeeper played by Tamara Podemski with an honorable swagger and palpable instincts. As a lesbian mother in a conservative town trying to win an upcoming election, the deck is slightly stacked against her, but Podemski infuses her character with tolerant grace and admirable elements from her own Indigenous heritage.

“They really wanted her to be the light in the dark, and that attracted me to her,” Podemski tells Inverse. “I do love playing those kinds of heroes, those moral compasses.”

Inverse spoke with Podemski about finding Sheriff Joy’s story arc, how the show’s enigmatic dimensions led up to her cliffhanger ending, and what she hopes happens next if Outer Range is renewed for Season 2. Spoilers ahead.

Inverse: What was it like working with the show’s talented cast?

Tamara Podemski: The benefit of booking the job in April 2020 and then having a year to freak out about it and prepare so that I was totally calm and cool by the time I got to share scenes with Josh Brolin and Tom Pelphrey really helped me. If I would have just been thrown into it, it would have been an intense shock to my system. So I’m grateful for the year lead-up. I had to get my heart and head into the right space. Not just to know that I was worthy to share space, but also be able to do it and enjoy it because they’re fun scenes.

You can’t go into a dark story world like that and be serious all the time. You need to go in with a sense of wonder and play. It’s easy to do because Josh brings that sense of fun to everything. That was important to balance out the crazy place we all had to exist in for seven months.

“I felt like I had her way before I even put that wardrobe on.”

What first attracted you to the role of Sheriff Joy and how did creator Brian Watkins explain the character?

They really wanted her to be the light in the dark, and that attracted me to her. I do love playing those kinds of heroes, those moral compasses. In terms of Indigenous representation on screen, I wanted to make sure I was a strong woman presence in that world. What I was concerned about was that she was too good. I needed to make sure that I found a way to allow her to slowly have a breakdown of her value system, and that you could see that pull existing in her.

In those early conversations, they were trying to keep Joy in that lift. Joyous. Joyful. The beautiful arc of Joy is that you get to see the desire for the votes start to compromise her values, and I needed to allow her to do that, even though I wanted to keep her pure and good.

When did you finally discover the core of Sheriff Joy while filming?

I really dropped into her when she takes down the meth-head in the gas station convenience store. It was an important side of her to see, especially in the point of comparison to the Abbotts and the Tillersons. She’s this model citizen who believes in the good. We know she has to be fierce and tough and smart and be able to physically protect and serve. I wish there was more of that. It just really rounded her out. In those rural areas, sheriffing is a lot of driving or you’re sitting at a desk. My physicality is a large part of how I meet characters, and so I needed that scene.

What aspects of your uniform or environment sealed the character for you?

I was so much a part of that. The art direction team was incredibly inclusive and invited me into all the conversations about what her home would be like. In making Joy’s home, I felt her start to grow. Choosing that beaded holster was a huge identifier of how she’s proud to represent who she is and where she comes from. She also has a braid of sweetgrass on her rear-view mirror. That’s a very Indian thing to do, putting some kind of medicine around your mirror, an eagle feather, or some sweetgrass. I felt like I had her way before I even put that wardrobe on. Those things made me feel like I made her too.

Which elements of your Native American heritage did you want to inject most to your performance?

It was when we brought the Wind River community into it, and Joy goes back to her reservation. My 30 years of telling Indigenous stories on stage and on screen, knowing the responsibility you have to your community, and to correct a narrative that has really screwed us severely for a long time, it was most important that we not only represent her community accurately on the screen, but also I wanted the experience of the members involved to be different from what they’ve ever experienced before. It’s about how you ensure that they have safe travel, that they are taken care of, and that their regalia is treated with respect.

Hollywood has allowed the use of our people, customs, or music in film to serve whatever story they need without understanding that it’s not to use at your leisure. I feel like we changed something when we filmed that episode. We started with a prayer. We invited the crew and offered them insight into what the pow wow is and what it represents. We felt so seen and so respected. We had a protocol and a different approach, and it was very meaningful.

“I resist calling it sci-fi because to me these are stories I’ve heard.”

What is the show’s trans-dimensional void and what does it represent for you?

The interesting thing about the hole, which Joy never sees, is that there are Indigenous stories in Montana and Wyoming about these time portals on reservations. It was asked of Brian Watkins, and he’d never heard of these portal stories on reservations. This was just what his own imagination dreamed up. That’s why I resist calling it sci-fi because to me these are stories I’ve heard. These multi-dimensional realms and universes are very common in some of our Indigenous stories. I don’t think Joy is as freaked out by the crazy stories. What’s weird to her are how these repressed, cut-off, or unspiritual people interact with the hole. That’s the thing that’s so very bizarre. I also love that the hole is not the only way to transition.

After your vision of the buffalo herd and Indigenous settlement in the season finale, what else do you hope to explore for Sheriff Joy’s journey in Season 2?

It doesn’t help the full Outer Range story, but for selfish reasons, I’d want her to stay there and connect with her ancestors. But realistically, I hope she learns something there that can give her the strength to finish the fight and find a way to stand up for what she’s fighting for, which is the goodness of this whole community. She was rooting for all of them. I think she’s 10 years away from being her strongest self. We’re finding her in that growth spurt. And to be fiercer and bolder and win that election!